The Purpose of Breasts. 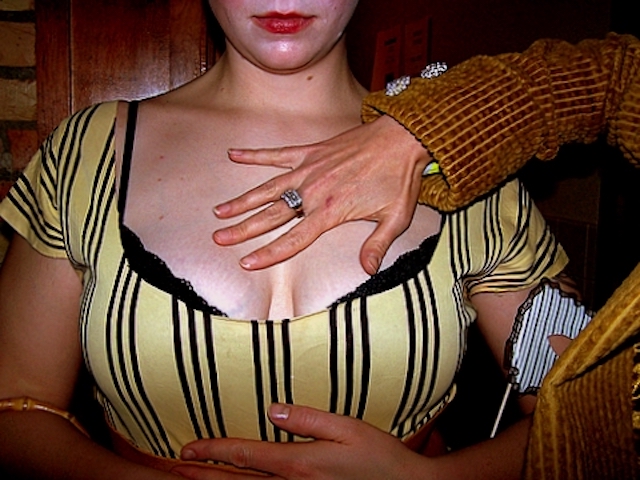 Earlier today, I was reading an article about a teenage girl who was told that, because she has large breasts, she needs to be careful about what clothes she wears to school—lest she become a distraction to the boys in her class.

Now, of course, there’s a lot to unpack in that sentence. I could focus on how harmful high school dress codes are because they hold teenage girls accountable for their male peers being unable to do their work when in close proximity to female bodies. I could focus on the fact that girls with large breasts are sexualized to a ridiculous extent, as it doesn’t matter what shirt they wear—any shirt is considered a “distraction” merely because the girl has large breasts.

But these are all issues that people have discussed before, and discussed frequently. So frequently, in fact, that these were many of the comments that were left on the article in question, as well as another comment, which is actually the one that I want to focus on right now:

“People need to stop sexualizing boobs; a woman’s breasts are for feeding children, not sex.”

Now, this statement was made frequently, and it comes from a well-intentioned place, I know. All that this statement is supposed to mean is that breasts should be more commonly accepted. Girls and women alike should be allowed to have breasts, to show their cleavage, to be shirtless in public, and it shouldn’t be a big deal because breasts are not inherently sexual organs. And I agree with all of this.

What I don’t agree with is the idea that the entire purpose behind a woman’s breasts is to feed children.

I mean, sure, breasts can be used to feed children. That is certainly a thing that they are capable of, and it is a thing that no woman should be ashamed of or have to do alone, tucked away in the shame corner (also known as the bathroom). It is a thing that we should be allowed to talk about comfortably. I mean, even if you haven’t pushed a human being out of your vagina, chances are you’ve heard people talk about the benefits of breastfeeding, so it’s understandable why people would suggest that is the purpose for breasts in the first place.

But what about mothers who decide not to breastfeed, whether for economic reasons or health issues or personal preference? I mean, these sort of mothers are becoming a bit of a minority as breastfeeding is pushed more and more in our society, but they most certainly do exist, and are they not valid? Are they not using their breasts properly? Do they have breasts for no reason at all?

What about women who are infertile, and cannot conceive a child—let alone give birth to and nurse them? In the United States, it is estimated that 10 percent of women aged 15 to 44 have difficulty getting or staying pregnant—and this is not a small amount of women. These women may never use their breasts to feed a baby, so are their breasts wasted? Do they fail to serve their purpose, because their bodies are not capable of creating life?

What about women like me, women who do not want to conceive a child of their own? In the past, this might not have even been considered an option for women, but more and more are coming forth nowadays and saying, “I don’t want kids!” and that’s fine. There are many reasons to decide that you don’t want kids—whether it be because you are dealing with a mental illness that you don’t want to pass down, you don’t want to deal with the potential hell of pregnancy, or you simply don’t see it as a priority and there are other things you want to focus on. This is a valid choice nowadays.

But, if you don’t get pregnant, then your breasts won’t fill with milk, and you won’t be able to feed any children. So does that mean that, again, you fail in your service as a person with breasts?

What about transgender women who choose to surgically implant breasts? What purpose do these breasts serve? I mean, they can’t feed children (not unless modern day plastic surgery has advanced much more than I realized). And yet, despite the fact that they don’t serve their apparent purpose, transgender women continue to want them and get them, and is this without a point? Are they spending all this money and going under the knife for no reason at all? Are their breasts, again, wasted?

The way that I see it, breasts are the only body part that’s purpose is argued. You don’t see people demanding that hands be covered up because they can and do get used during sex, while another group argues that hands are perfectly fine and should be accepted because they can be used to tickle children as well.

The truth is, breasts are just breasts. They are a body part, and their purpose is to be bags of fat that hang off the chest. I know that sounds much less romantic than the alternative, but it’s true.

Breasts have uses, but they don’t really have a sole, defining purpose.

And, the way I see it, it is dismissive and unfair to say that the purpose of breasts is to feed children just because, for years, we—as a society—considered bearing children to be a woman’s only purpose. That just isn’t reality anymore.

Your body is not one, big reproductive organ. You are a person, filled with thoughts and feelings and emotions and passions, and the purpose of your body is to carry all of that. I think that society sometimes makes it too easy for us to forget that, with the sort of language that it uses toward women.

So the next time that you want to say, “It’s ridiculous that we tell girls that they need to cover up their breasts when they aren’t even sexual organs,” say that instead. Because there are too many experiences out there that we ignore and belittle by assigning breasts a singular purpose.

For the Love of Breasts.