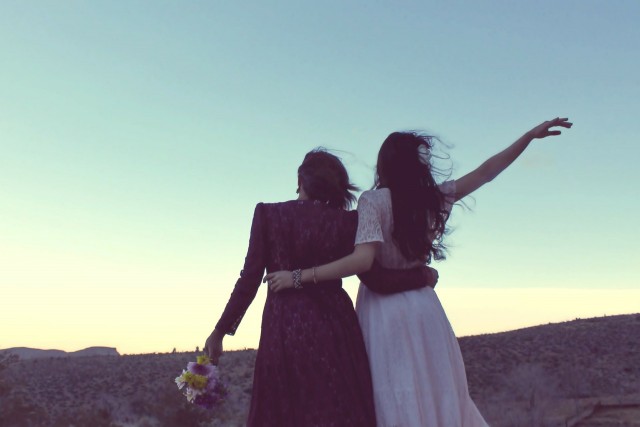 Recently, I found myself sitting in a room with a whole bunch of people, in which one older gentleman was talking.

While I was there, he laughed and made the comment, “I don’t know what sort of language the kids are using today, or what words have been reclaimed now. Is it alright to use the word ‘queer’?”

In response, the majority of the people in the room—most of them straight and cis-gendered—responded by saying, “Oh no, no, no—don’t use that word. You use that word, and you get in trouble.”

The topic of conversation moved on from there, but through all of this, there I was—this tiny queer voice in the back of the room, thinking, “Really?”

Because, personally speaking, this response did not at all reflect my experience. To be honest, I actually really like the word “queer.”

And, admittedly, perhaps a bit of my liking toward this word comes from a place of privilege, because I never had this word used toward me with a negative connotation—but I know many people have.

Historically speaking, this is a word that has been used to harass and belittle many people—to dismiss them as “weird” or beyond understanding—and, of course, that is never okay. And, if you are a person who does not like being labeled with this word because of an unpleasant history with it, I can totally understand that and will not tell you that you need to feel differently.

However, that being said, as a reclaimed word, I find “queer” to be an incredibly liberating identity.

If you are not familiar with the practice of reclaiming words, this is when a specific word has been used in an attempt to hurt people in the past—but in the present, that word is taken by the oppressed group and given a slightly different connotation, with the intention of taking power back.

For example, the word “bitch” can be considered a reclaimed word; historically speaking, it was used to describe an unpleasant, despicable woman, usually one who asserted herself in a way that made men uncomfortable. But nowadays, many women will proudly describe themselves as a “bitch,” because they are willing to assert themselves, even if it makes men uncomfortable—and they aren’t ashamed of that.

In a similar vein, the word “queer” has been taken from a word that means “weird”—and by extension, “wrong”—to one that means…something else.

Because, to be honest, I’m not entirely sure if “queer” has a solid definition yet.

I have sometimes heard the word “queer” used to describe gay, lesbian, and bisexual people—which makes sense. This is the group of people that this word was most frequently used to wound in the past. And, more than that, the word “queer” serves as a great, useful blanket term for anyone who has any interest at all in their same gender.

Because, let’s face it: sometimes, these identities can feel somewhat…limiting.

It was Kinsey’s belief that a person’s sexual orientation is subject to change over the course of their life (which is today considered a controversial belief, for perhaps obvious reasons), and that the majority of people fall somewhere in the middle of the scale. So, being in that nice one, two, three, four, and five area indicates at least mild interest in both genders. (This is, again, controversial.)

Now, you may or may not agree with Kinsey’s perspective, but the reason why I feel that it is important and relevant to what I am saying is because sexual orientation is not always as simple and straightforward as gay, straight, and bisexual.

Not everyone will experience this; there are some people out there who do have totally exclusive interests. But, for those of us who don’t—those of us who don’t necessarily feel like gay, straight, or bisexual entirely describes who we are—queer is a nice alternative for us to fall back on.

Because queer isn’t limiting. Queer is whatever you want it to be. Queer is full of possibilities and full of options.

Because, just like with sexual orientation, gender has historically been very stifling. When it comes to gender, you are typically expected to fall into one of two categories: male and female, determined by what genitalia can be found between your legs.

If you are male, then you are expected to behave in a way that corresponds with that—you are to be “masculine.” You must be a provider, and you must be in control of your emotions. You must be strong, powerful, commanding, and in control.

But, “queer” doesn’t expect anything. “Queer” accepts you as you are, whether that be feminine, masculine, or somewhere in between. “Queer” doesn’t tell you how to act or what to be, and “queer” most certainly doesn’t care what’s between your legs.

Because “queer” is not exclusive. When you identify as queer, what that means is that you fail to live up to what society considers the standard, the expected. And while that can be very difficult and isolating when you are the only one doing so, the identity of queer builds a community around you. It means that you are not alone, and that there are many out there who do not feel like their experience matches up with the one that society tells them they should have.

That, to me, is what the reclaimed word “queer” means. And that is why I have no shame identifying myself as a queer person.

In & Out of the Queer Closet.

Why We Need More Sex Labels.