How the Bhagavad Gita taught me to Let Go of Outcomes. 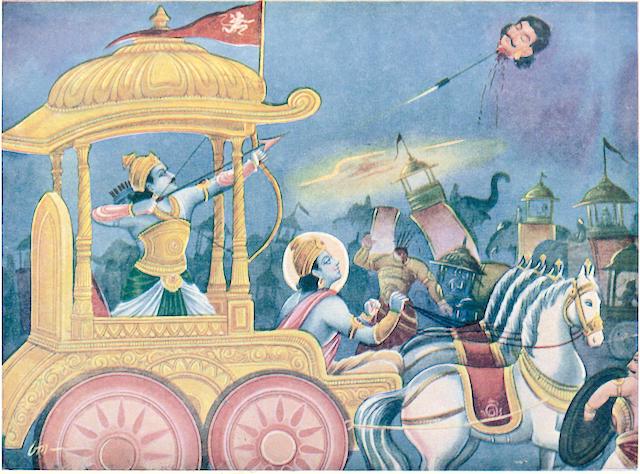 It’s end of the month, and I’m checking the number of views on my blog, comparing my progress with so many other bloggers who love to showcase their numbers.

My blog views and subscribers have gone up slightly, but not enough.

I take a deeper look at the analytics and fret about what to do next. There is so much information out there on how to improve—post regularly on social media, offer free giveaways, define your audience—that I’m overwhelmed to the point of no longer enjoying my writing process.

The next morning, I get up very early, pick up the Bhagavad Gita, and spend the next few hours reading. It’s probably the fifth time I’ve studied it, yet I still get so much out of this text.

The Bhagavad Gita is a part of a much larger Hindu holy text—the Mahabharata—written between 200 and 500 B.C.E. It documents a conversation between Arjuna, prince of the Pandavas, and a God named Krishna.

Arjuna laments going into battle with the Kauravas, his relatives. He foresees the imminent death of his teacher, uncles, and friends, and would rather lay down arms and surrender than allow so much killing. He drives his chariot to the center of the battlefield, then slumps to the ground and begs Lord Krishna for advice on what to do next.

Krishna’s reply constitutes the Bhagavad Gita. It covers many aspects of worldly and spiritual life, but the core message to Arjuna is that he must fight, notwithstanding the “fruits of his actions” or the bloodshed that must ensue.

Krishna goes on to admonish him, saying that confusion and inaction will lead Arjuna into mental turmoil, shame, and historical disgrace.

He claims that Arjuna will never know spiritual peace if he fails to fight.

Though war and killing is an odd pretext for the Gita, especially given that Hinduism teaches non-violence, it’s typically seen as a metaphor for the internal battles we all face. Great men like Gandhi, Thoreau, and Thomas Merton all loved the Gita and held it in great esteem.

In his journal of 1845, Ralph Waldo Emerson wrote of the Bhagavad Gita:

“I owed—my friend and I owed—a magnificent day to the Bhagavat Geeta. It was the first of books; it was as if an empire spoke to us, nothing small or unworthy, but large, serene, consistent, the voice of an old intelligence which in another age and climate had pondered and thus disposed of the same questions which exercise us.”

Just like Arjuna, I was fighting my own internal battle—justifying my existence as a blogger when my page views did not.

True, the stakes are lower for me, but it’s my fight.

Do I stop blogging and accept that I’ve failed as a mainstream blogger? Do I continue trying to grab and grasp every tip and “how to” to get more followers and readers, at the risk of becoming results-focused? Do I stop writing altogether?

For me, the Gita’s message was loud and clear:

Get into action. Do what you love. Go for your goals.

E.M Forster puts it this way:

“The saint may renounce action, but the soldier, the citizen, the practical man generally—they should renounce, not action, but its fruits. It is wrong for them to be idle; it is equally wrong to desire a reward for industry.”

I must write consistently without worrying about the statistics, just as Arjuna needed to enter the battle and fight for his people irrespective of potential bloodshed. I must write without hope of controlling the fate of my writing as Arjuna could not carry the burden of all those who would die in the war.

Though my actions seem trivial beside Arjuna’s, we both have a divine duty to act. And we both must let go of what happens next, leaving it to a higher power to do the rest. We are both doing God’s work.

This is the only way our human selves can both fulfill our spiritual responsibility and thrive.

After internalising the Gita’s message, I now see my purpose much more clearly. I want to be a writer. I’m in it for the long haul, and I’m not looking for popularity. I want to develop and deepen my writing voice, which essentially means expanding my soul’s presence.

It is devotion to the craft that I need, rather than more page views or readers. There is a simple beauty and a gentle peace that emerges when we worry only about our actions—and not the results.

Somehow, I feel that this way of thinking will lead me to better actions, a more authentic voice, and probably stronger results in the long term.

In the coming weeks, my blog’s landing page will change to reflect more of who I am. My weekly newsletter will have a more personal touch. My social media posts will be less mechanical and more vulnerably me.

I’m getting into action and leaving the rest to God and the universe. I hope every blogger, writer, creator, or spiritual warrior does likewise.