In a World of Loud Opinions, here’s how we Tune In to our Quiet Inner Voice.

A couple of years ago, my best friend and I visited New York.

We had both heard about a unique little gallery on the outskirts of the city so, after several days of soaking up the city, we planned a trip to escape the madness, excited at the prospect of exploring some interesting art.

The gallery was a short walk from the train station and we followed the thread of fellow seekers, ready for some quiet contemplation and the potential stirring of emotion invoked only by art. We entered the building and looked around. There was nothing there, so we figured the exhibition would start in the next room. But that room too was filled with what looked like nothing at all.

We were surrounded by wall upon wall of whiteness.

The next room was similar. White boards on white walls. Occasionally a white block on a white wall. Or a single dot on a white wall. And every now and then the whiteness was interrupted by a string of wool or a carefully placed pile of rubble or perhaps a wooden plank.

Apparently, this is called “installation art.”

We only knew this because of the lengthy descriptions that accompanied said whiteness. Descriptions using suspiciously made-up words trying to cloak themselves in incredible importance and grandeur—but which actually said nothing at all.

We looked around at the serious faces, no one giving anything away. And then we started laughing. We started laughing like I can only remembering doing with my cousin during Catholic Mass. That kind of silent, suppressed laughing where little comes out your mouth but your shoulders are shaking and tears are streaming down your face.

If you’ve seen the brilliant movie, “The Intouchables,” you’ll remember the hilarious scene where Driss (played by Onar Sy) attends an opera for the first time and collapses with hysterical laughter at the Singing Tree. He’s is unable to stop laughing and pointing at the man on the stage, dressed up as a big green tree and belting his heart out in unmistakably operatic torment.

Driss is my hero. He was able to cut through the bullshit and call it out through laughter. Stepping back from it all, he was able see what was ridiculous and silly and funny and because he was so completely comfortable in his own skin, he didn’t feel the need to pretend otherwise.

We pretend all the time.

We get caught up in things we feel we should like or respect or be impressed by, but we aren’t stepping back to decide for ourselves whether these things are worthy of our attention or not. We aren’t asking ourselves what we really think or feel or believe. And when our opinion differs from that of those around us, we’re incredibly quick to believe that the fault must lie with us.

It must be me. I’m obviously not bright enough to grasp the meaning. It’s surely my own inadequacy that I just don’t get what this is all about.

When I walked out of that gallery, I was joined by a fellow browser. “What did you think of it?” he probed. “I think it was the biggest load of shit I’ve seen in a long time” I replied. He started laughing, and then he laughed some more, and when he finally came up for air he looked at me with delight and relief and said, “Thank God. I thought I was the only one.”

Figuring out what we truly think and feel has never been more important than it is right now.

Every day, we’re faced with thousands of external opinions and beliefs. If you’re a solopreneur, you’ll know what it feels like to be drowning in the shoulds of building your business: grow your list, curate your Instagram feed, build a sales funnel, create free offerings.

The more information comes at me, the more overwhelmed I become and the shakier I feel about my once-firm beliefs. It doesn’t seem to matter what industry you’re in, the belief bombardment is there. My mum friends are feeling the pressure to sew haute couture costumes, create their own homeopathic remedies, and know the personality archetypes of every child so they can communicate in the most effective manner possible.

As much as I like to think of myself as a pretty grounded and practical person—someone who has the ability to cut through the shit—I still find myself getting caught up in this nonsense. I find myself following people and making lists and adding to the musts, all in the manner of growth and expansion and that dreadful word: “up-leveling.”

But actually? No. No is what I have to say to all of this right now.

Just like Driss, we have to learn to step back and see things a little more clearly. We have to stop the pretense of professionalism or perfection or whatever mask we’re actually hiding behind, and we have to see things as they actually are. Or more importantly, how we feel they are.

We have to see that the “six-figure income in six months” is a load of nonsense, and that just because we haven’t nailed it, doesn’t mean we’re a failure. We have to see through the “conscious uncoupling guide to perfect partings” that doesn’t take away the pain from a messy, heart-rending divorce. We have to stop furiously taking notes during every talk we hear because that person must know how to live life so much better than we do. And we need to unsubscribe from and un-follow those whose input is not constructive, and only adding to the noise.

Let’s pause and listen to ourselves more often.

Let’s spend time and energy connecting to our deepest needs and desires so that we are in tune with what we think and believe. Let’s pay attention to our own inner wisdom as the most powerful discernment tool available to us.

And if we’re going to take guidance from anyone, then let it be Driss. 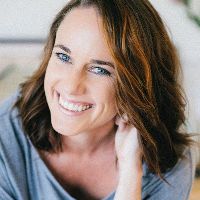