The 7 Parts of Yoga You’re Missing Out On. Yoga first began in India thousands of years ago with the rishis, mystical seekers, doing various practices to prepare themselves for meditation.

Yoga has now expanded into a 16 billion dollar industry, after immigrating to the West, which stretches from teacher trainings and weekend workshops to clothing lines and retreats. So, why the huge craze? Does this movement demonstrate that we are healing as a society? Is the foundation still representative of the ancient teachings?

These are questions I have been contemplating for a while now. I’m from a coastal town in Mississippi and only first heard about yoga when I was attending college in New Orleans. My first class was at a Pilates studio that I frequented. After closing with Namaste (a Hindu way of saying I bow to the divine in you), I felt a sense of serenity unlike anything I had experienced previously. From then on, I was hooked. A month later, I decided I wanted to dive deeper into all aspects of this practice and relocated to a local yoga studio.

While I knew it had its physical benefits, to me, the practice was not just an exercise. It was more of an awakening. For years, I had struggled with body image and spirituality. Through dharma talks, chanting, asana, pranayama, and meditation, I overcame an eating disorder and reconnected with my soul. Reestablishing my direct line with God, I began to see myself as one component of a universal order. My perception of how I viewed everything shifted. Two years after my initial class, I became a certified teacher.

This past January, I saw Dr. Madan Bali speak in San Diego. He is a 93-year-old yogi who exemplifies how yoga can transform the body and soul. He says that yoga is about learning how to transcend, and it’s not just the physical postures but also pranayama, breath work, that nourishes the brain. In asana, the physical practice, a person becomes more focused and present with how to engage and challenge the body when approaching various situations. Once there, she then can reidentify her experience. Yet, as Bali points out, the pranayama is also an important factor.

In Patanjali’s Yoga Sutras, an essential yoga text for self-realization, asana is the third limb and pranayama the fourth of the eight limbs of yoga, the sequential order of yoga. The eighth being samadhi, enlightenment. Within yoga, there are many forms of pranayama. When directing the asana practice, the breath is considered to be a principle element.

The ujjayi, a cooling breath, is the primary pranayama we use to support us during the asana practice. Research has shown that by applying any pranayama effectively, the body becomes relaxed, enabling conscious awareness to enter into the unconscious mind. So, with over 36 million Americans practicing asana, the leading force of yoga in this country, would one conclude a radical shift in perception and behavior is taking place?

I once took a workshop with Nischala Joy Devi, author of The Secret Power of Yoga. She said that to get the full benefit, a yoga class should offer more than just asana. Although the ujjayi breath is paired with asana, it can only be fully effective when done on its own for a minimum of three minutes—the time it takes for the parasympathetic system to override the sympathetic. Attending a number of yoga classes around the United States. I have experienced many teachers incorporating pranayama and/or meditation into their classes. However, over recent years, I have begun to see a rise in strictly asana based classes centered around building and sustaining just the body.

Going back to the eight limbs, the recommendation is to start with the asana before integrating the pranayama into the practice. This works out well, for it is through the postures that people often learn about feeling, movement, and boundaries. Yet, to make spiritual growth, we have to continue up the ladder. According to Sri Swami Sivananda, “You can hardly make spiritual progress without the practice of pranayama.”

Asana is control of the body while pranayama is control of the mind. Pranayama is the extension of universal life energy, and through this practice, one’s mind can become much quieter. By isolating the pranayama, we change the physiological state of the brain. Activating the rest and digest, we are better prepared for meditation, the seventh limb. Once we enter meditation, we begin to have access to our higher self.

The first of Buddha’s four seals is that all compounds are impermanent. Like all material objects, our bodies are a compound that will eventually decay. I am not saying that asana, which I practice every day, does not have its benefits. Asana has helped many people, including myself, heal through physical injury and, some, even disease. What I am trying to convey is that true yoga teaches us that we are more than this physical form; the body, while important, is merely a vehicle for us to learn through.

Yoga means to yoke, unite; asana is only one stepping stone to a much deeper practice. According to Patanjali, if we want to use the yoga practice to grow spiritually, we must go beyond the asana. By not moving into pranayama and meditation, we forfeit returning to stillness and connecting to our essential being, our soul.

So back to the question: is a radical shift occurring or is Western yoga losing touch with its roots? Of course, civilization has drastically changed from thousands of years ago. However, our internal nature is the same. With society placing so much emphasis on presentation, and Americans spending a record high on appearances, one does have to wonder if we are attempting to fill a void that can only be addressed from within. With this mentality so engrained in our culture, has it now made its way into the yoga world?

Yoga is unique and personal to every individual; therefore, a yogi can only inquire about whether her own practice offers internal growth. Each limb of yoga is a building block for the next. Overall, yoga is one way to connect to our true source. Through the original practices, we are able to realign our actions and transcend the ego, which according to the rishis was the ideal purpose—to become one with the divine. As B.K.S. Iyengar, the man who popularized yoga in the West, said, “Yoga is the union of our will with the will of God.”

the Future of Yoga. 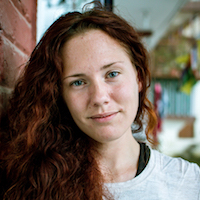