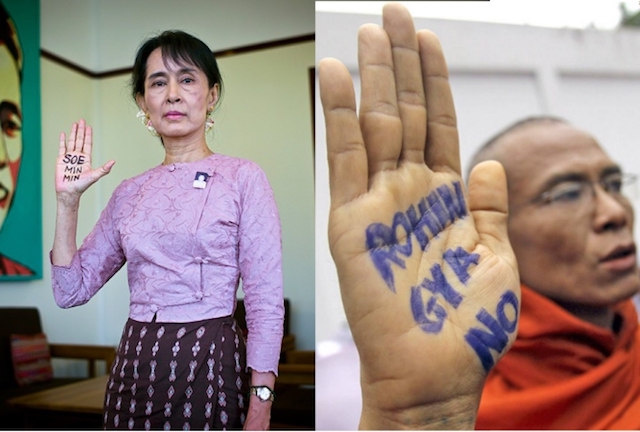 The United Nations has described them as the world’s most forgotten people and the crimes they suffer as genocide.

They have endured mass rape and random killings. They have been pushed from their ancestral homeland and left to languish in refugee camps. They are hungry and thirsty and susceptible to disease, and they have been put in this condition all in the name of Buddhism.

The Rohingya are a tiny Muslim minority in the almost entirely Buddhist state of Burma, also known as Myanmar. Buddhist nationalists see them as a threat to their dominance. Buddhist monks have routinely led mob attacks on their villages. Almost half-a-million were just ethnically cleansed from the places of their birth. And it has been whitewashed away by Burma’s de facto head-of-state, Aung San Suu Kyi, probably the world’s most revered female Buddhist leader.

The ethnic cleansing of Rohingya must come as a rude awakening for those who have idealized Buddhist societies. But it is not the first time Buddhism has been used as the ideological tool of a genocidal army. Japan’s most prominent Zen Masters allegedly justified the imperial fascism of Emperor Hirohito in World War II, which arrogated vast portions of East and Southeast Asia and forced thousands of women into sex slavery.

It would be as absurd to hold ordinary Buddhists responsible for these crimes against humanity, as it would be for Burmese Buddhists to hold the Rohingya responsible for those committed by Al-Qaeda in the name of Islam. A shared religious identity is one of the most powerful principles around which people can organize, so organized religions will probably always be prone to hijacking in the service of violence. But it is for precisely this reason that the members of a religious community would do well to speak out against the crimes committed in their names.

American Buddhists tend to renounce organized religion, as if what they are doing is altogether different. But anyone who has ever managed a meditation center can tell you that teaching meditation requires vast resources. Classes must be taught someplace, teachers supported somehow, books published somewhere. Retreat centers are needed to deepen practice, for social events to hold the community together, and services to mediate life transitions. Moral rules to preserve a sense of decency, and meditation center managers are needed to make it all run smoothly.

What began as a spiritual discipline is thus transformed into an organized religion, and there is little with which people identify so much as their religion. For religion binds us together around what matters most. It is a beautiful thing to make your closest relations those with whom you can share your deepest experiences. But once we become identified with a religious tradition, we become implicated in the lives of our co-religionists, thereby thrusting upon us special burdens of moral responsibility.

We become responsible for caring for fellow community members, for in the absence of such care spiritual disciplines would become mere exercises in narcissism. But we also become responsible for what is done in the name of the religion, for little is exploited so much as religion. And if the exploitation of a religion is allowed to carry on without censure, the religion itself will become a magnet for shysters and warmongers.

Serious spiritual traditions tend to inspire their practitioners to take on some such responsibilities and use them as grist for the mills of their own spiritual development. Spiritual practice encourages us to let go of self-centered attachments and see ourselves as part of something greater. This deepening sense of interconnectedness tends to inspire moral action and social service, for it deepens empathy and eases the burdens of moral responsibility. It is easier to give back to others when you have reduced your own attachments.

Western Buddhists are particularly well-placed to protect the Rohingya. Many, like myself, have an emotional tie to the country through having practiced under Burmese teachers. But all of us are tied to it through the practice of Buddhism itself, whose teachings are being used to justify the killings. By speaking out against ethnic cleansing in the name of Buddhism, we withhold from the leaders of the ethnic cleansing powerful ideological tools, and we draw into question the nature of the Buddhist identity that is being used to inspire violence. Moreover, since Buddhism is so strongly opposed to violence, we bring to the protection of the Rohingya the Buddha’s own teachings on nonviolence.

Western Buddhists are also trained in the observation of suffering. We sit with it daily in our meditation practices and must often endure weeks of it at a stretch in intensive retreats. This makes us unusually well-suited to grapple with the suffering of the Rohingya. Few people can stare for long in the cold eyes of genocide. We become disheartened by the brutality of humanity, traumatized by the crimes to which we bear witness, and rapidly subject to burnout. Buddhist meditators, however, are trained in remaining unbound by the suffering they face, and most would do well to step outside their comfort zones and face it a bit more.

It is quite possible the monks leading mobs attacks on innocent Rohingya were brainwashed or planted by the military, which began controlling the monasteries after monks protested the regime en masse in 2007. But the Rohingya tend to be hated by most Burmese, largely because they are not Buddhist. The hatred and attacks increased when the country democratized, for democratization always raises the question of who is in and who is out. Identity issues are interlaced through every element of these attacks.

It is, of course, ironic that Buddhists, whose practices focus on cutting through the illusion of a separate self, would make identity so central to their crimes against humanity. The dissolution of the self sense is so central to Buddhism as to make anyone who would kill in the name of a more pure Buddhist national identity a sort of cosmic buffoon. But such misunderstandings are typical of the practitioners of any organized religion, which is why so many spiritual teachings are dedicated to combating just these sorts of distortions.

The leaders of a religious community bear special responsibility to speak out against moral wrongs committed in their names. They are especially responsible because, unlike most everyone else, their voices are likely to be respected and heard. And unlike most everyone else, speaking out is often astonishingly easy. It would take little effort for senior teachers associated with the Insight Meditation Center and the Vipassana Meditation Society, whose traditions are intimately tied to Burma, for instance, to lead their communities in condemning the violence.

Spiritual teachers are perhaps most responsible insofar as they represent their traditions. In this way, their silence is a form of assent, like the Bishops and Popes who failed to acknowledge the sexual abuse in their own tradition. The analogy is imperfect, for there is a wide world of Buddhist traditions, each with its own issues, and only one Catholic Church. But the analogy highlights the expectation that spiritual leaders should protect their religions from abuse and the ease with which others can get away with it when they abdicate responsibility.

Perhaps the most important thing we can do is simply proclaim that these people have fundamentally misunderstood their own religion and have nothing whatsoever to do with actual Buddhism. This protects the religion, isolates the protagonists, and undercuts their authority. So much the better if we donate to aid groups, sponsor children, serve in refugee camps, and publicly speak out against ethnic cleansing in petitions, posts, and articles.   The Rohingya need someone to assure their basic human rights will be respected, and who better than those in whose name their rights are being violated?