Catcalling was never meant to make a Woman Feel Good. 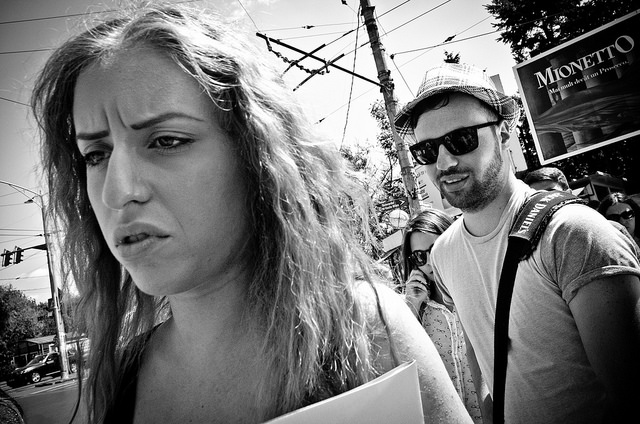 A while back, I made the comment that catcalling is linked to misogyny, perhaps without adequately explaining myself.

In response to this, someone told me something that is frequently used to explain and excuse catcalling:

I thought about this comment today when I was catcalled on my way to the gym.

Now, my walk to the gym is not a particularly long one—about 10 minutes on a nice day. I was coming up on the gym’s parking lot, when I noticed a man standing a little bit ahead of me, watching me. Once I got close enough for him to speak to me, he yelled out, “Look at this sexy lady with her awesome hair!” I half-smiled, already offended by a complete stranger referring to me as a “sexy lady,” but I kept walking, not wanting to start anything. He continued to follow me, yelling at me all the way through the gym’s parking lot, and though I stopped listening at a certain point, I heard enough to know that he compared the color of my hair to his underwear.

Walking ahead of me was a man who I had seen at the gym before, though we had never really spoken. He kept glancing back at me, as though to make sure that the man who was following me never crossed any lines. I was grateful for him and his presence there, because I was fully prepared to yell for him to get help or call the police if it got to that point. As it was, I was just trying to ignore the man and get to the gym where I knew there would be people and I would be safe.

Sure enough, the man stopped following and yelling at me once I got to the gym.

This is not the first time that something like this has happened to me. And I know for a fact that I am not the only woman who has experienced this.

And the thing is, I have been complimented before. I know what compliments are, and I know how they make me feel. Truth be told, my hair is pretty unique. I receive so many compliments on it that my coworker has joked that I should take a shot every time I do.

I have been told by many strangers on the street that they “like my hair,” and then they either move on or start a polite conversation with me, which I am happy to continue. That is a compliment.

I have been told before that my hair reminds them of Storm from the 1980s X-Men comics, and that since she’s pretty badass, I must be pretty badass too. That is a compliment.

I have heard these compliments from both women and men, and they do not offend me. These are not the comments that I am calling out when I say that catcalling is linked to misogyny.

But what the man was doing as I was walking to the gym was not complimenting me.

The distinction here is how I feel coming out of these two scenarios. And perhaps this is part of the reason why so many people get “catcalling” and “complimenting” confused: it is difficult to comprehend the way that one party feels when they come out of a scenario, especially if you do not take note of the grimace and the quickened pace that they are intentionally hiding to protect themselves.

When I receive a compliment, it makes me feel happy. I come away a little bit lighter, a little bit more proud of how I look. It endears me to the one who complimented me, because they went out of their way to be polite and make me feel good about myself. They didn’t cross any lines. They didn’t make me feel uncomfortable. They just wanted to let me know that they liked something about me—that was their sole intention.

When I am catcalled, I feel uncomfortable. I feel violated and a little unsafe. I might know logically that this man is not going to attack me, but I make sure that I don’t do anything that might displease or encourage him, like telling him to f*ck off (which, by the way, is what I want to do), because there is a part of me that is worried he might actually hurt me.

When I am catcalled, I do not want to continue a conversation with this man. I do not want anything to do with him. All I want is to make sure that I am in a safe space, surrounded by kindly people with access to phones.

And I cannot imagine that those who catcall intend it as a compliment, because they have to know that the things they are saying and doing are crossing a line.

The purpose of catcalling is not to compliment; the purpose is to sexualize.

The purpose is to establish that he is a great, big, impressive heterosexual, cis-gendered man who can say anything he wants to the small, delicate, passive, submissive, presumed heterosexual and cis-gendered woman.

If she is not flattered by it, or if she does not accept it, then she is a b*tch, quite possibly one who deserves harm done to her—and this is why so few women challenge catcalling when we are faced with it; not because we are secretly charmed by it and playing coy. If the purpose of catcalling was to compliment, then it would not turn into threats and insults at any point, yet it commonly does. I can attest to this, as a woman who has had men scream “f*ck you” to me for no other reason than walking on the street in broad daylight.

Catcalling is not meant to make the woman feel good about herself; it’s quite the opposite, really. Catcalling is meant to make the woman feel like she could have avoided this harassment if she had dressed a little bit more conservatively, while it makes the man feel more masculine, having publicly proven his aggressive heterosexuality to everyone.

When I say that catcalling is linked to misogyny, I am not at all saying that a man cannot tell a woman that he likes her hair or her eyes or her smile without it being offensive; that is not even remotely the case. Catcalling is linked to misogyny because the men who do it do not realize and do not care that the woman in question is a person, or that she feels threatened by him; they merely feel entitled to a certain level of power over the woman, the power to say and do anything they want without question.

Catcalling is linked to misogyny because it contributes to women feeling unsafe in the streets, which lends to this cultural idea that women should not be allowed to go in certain spaces, at certain times, with a certain amount of company or dressed in a certain way, because if they violate any of this, then clearly they are “asking” for “something” to happen to them.

There is a difference between approaching someone respectfully, and following them and/or yelling things at them that make them feel unsafe and demeaned as a human being.

That is the difference between complimenting and catcalling.

And personally, I find it surprising when people do not seem to understand the distinction between these two approaches. Because, to me, as a woman, the difference seems stark.

There is absolutely nothing wrong with treating someone as your equal, walking up to them, and verbally appreciating something about their physical appearance. In fact, this is something that we should do more often, because it makes people feel good about themselves, and we don’t have enough of that in our society.

But if you are making them feel uncomfortable, if you are clearly crossing lines and/or reducing them to a sexual object rather than a person, then it is no longer a compliment, and it is no longer about them. At that point, it is entirely about you, and your entitlement to be heard taking precedence over their comfort.

How to Defuse a Catcaller & Reclaim our Feminine Power. Two Words.