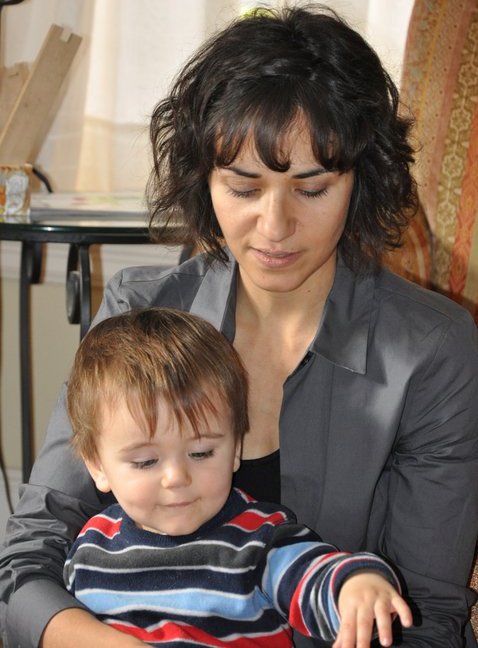 From inside the house, I peer out the window, watching my son walk to the mailbox.

He walks slowly for a change, and I can see the bones of his shoulders move beneath his shirt. He is a boy, now—he is not a preschooler, or a toddler, or a baby anymore.

I squeeze my eyes shut for a moment, and try to conjure the baby he once was, the one who clung so tightly to me, the toddler who’d toss himself on the ground if I hugged anyone besides him. I try to imagine his first face again, that strange, brand new blend of infant and ancient, but I can barely summon it. The way my kids replace themselves over and over again never fails to stun me. To watch them evolve, to watch them becoming is breathtaking, heart-squeezing magic.

And now that I know that, I can admit this: I did not enjoy early parenthood.

I didn’t enjoy the way that sleeplessness shredded my mind. Not the postpartum depression and anxiety that tanked my self-esteem and made me question my sanity. Not the staggering and sudden loss of the independence I’d so squarely taken for granted. Not being constantly tethered to my children as their food source and for their relentless neediness.

Even as love for them bloomed brightly—a love more vast and muscular than I ever could’ve imagined—I was disappointed by early motherhood.

Before having children, I’d fantasized about the quiet days of cuddling, but I’d failed to imagine the boredom of the remaining 23 hours I needed to fill each day. I’d failed to imagine all the phases: the cluster feeding phase, the teething phase, the not-sleeping-through-the-night-until-they’re-two-years-old phase. Parenthood was confounding and confining, something that could swallow me alive. And in turn, I loathed myself for not loving motherhood.

Those days seemed like they would last forever—the dripping, repetitive days of feeding and diapering, and the ravenous self-doubt that hissed you’re doing it all wrong. I hated it when older women in the grocery store would gaze at me and my children, their eyes going soft and dreamy, always warning me, “Enjoy every minute. It goes by so fast.”

When we’re in the intense period of parenting, when we’re struggling, when we’re counting the hours until our partners get home from work, it doesn’t feel fast. It felt like the days dripped by and nothing would ever change, and somehow my family would be the one to defy time, frozen in this era that was both mundane and miraculous.

And yet, it did go by. I crawled through those hard and gleaming times, and while I don’t wish to go back, I do wish I could slow it all down now. Because now I know what I didn’t know then, what I couldn’t have possibly known. It’s not just that it goes by quickly, it’s that you lose those little slivers of who your babies were, and it happens so stealthily that you don’t even notice until it’s too late. One day you can’t remember what the weight of a baby felt like on your shoulder or what their toddler laugh sounded like. And those pieces are buried inside of them, like autumn leaves that lose their color and become part of the landscape, and you try to uncover them in the recesses of your mothermind.

Just as our kids change over and over again, we don’t stay static, either. Time has allowed me to accept that I’m not the mother I thought I’d be. It’s okay that I’m not a 1950s mom, that I suck at housekeeping and cooking, that I’m a mom who loves my work and sometimes breaks into a little jig when the school bus picks my kids up in the morning. And I like having older children. I like not wiping butts, or cutting grapes in half, or coaxing woodchips out of their mouths at the playground.

And I like this version of me better, this version who writes all day and is slightly more relaxed and only sometimes counts the hours until bedtime. As parents, we don’t change as obviously as our children do, but we still morph, we still keep becoming ourselves—each time getting a breath closer to the person we are meant to be.

Sometimes at the grocery store, when I’m blissfully shopping solo, I find myself staring at women with a new baby and a toddler tugging at their jacket, the women who sway from side to side without even realizing it. I see the exhaustion etched on their faces, the way their bodies are no longer their own. And I feel my eyes go a little dreamy and my chest fills up with this blend of nostalgia and relief, the same way I used to feel the zing of my milk letting down in my breasts.

And I think about that new-mother version of myself, and what I wish I could whisper across the years:

It’s okay that you don’t love motherhood, that you sometimes resent the density of your role.