What if God were a Girl? (Turns out She Is.) 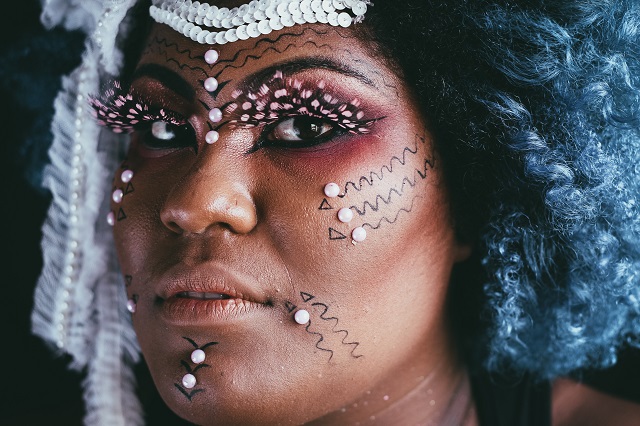 Everyone knows God is a guy, right?

Major league monotheism would have us believe the narrative that God is exclusively a father-figure and the universe was created in his image.

Simple enough. But increasingly for many, far too simple.

In reaction to this gender-exclusive view of God, there is a rising wave in Western New-Age spirituality with the emancipation, manifestation, and celebration of the feminine divine.

Women’s spiritual circles abound, appropriating rituals and ceremonies from cultures as disparate as Native American to Hindu, adopting cacao, Ayahuasca, angels, fairies, and the feminine full moon in a heady mix of superstition, ceremony, and iconography.

For many of these women’s groups, the “no men” rule is an understandable reaction to the masculine dominance of spirituality and the often perceived and voiced opinion that “masculine energy” is the cause of so many of the world’s ills.

If only God were a woman!

But wait, it turns out she is.

For the ancient Greeks, Eris was the goddess of discord, chaos, and strife. The Egyptians worshipped Menhit, the goddess of war: “she who massacres.” In Japan, the fearsome samurai and ninja assassins prayed to the warrior goddess, Marishi-ten, for courage and protection in battle.

Along with love and fertility, the qualities often attributed to goddesses, there is also a goddess of war in almost every recorded civilisation in history, be it the Romans with Bellona, the Norseman with Freyja, or the Celts with Agrona.

Over the ages, it seems a gorgeous gang of goddesses, along with the real-life likes of Boudicea, Joan of Arc, and the fearsome Apache warrior, Lozen, have kicked their share of butt, right alongside their masculine counterparts. Girl power indeed.

In a petulant reaction to being barred by gender from women’s spiritual groups, a friend of mine recently began a men’s only group and invited me to join. There was only one rule: “no women.”

The reason I declined his invitation was because these kinds of New-Age groups are founded on exclusivity rather than inclusivity, a sort of spiritual segregation of the sexes lazily borrowed from religion—and that just ain’t my thing.

Before the dominance of monotheism, religions and spirituality in general have more usually viewed the divine as a cooperative balance, a union between a feminine and masculine expression.

For example, on the Mediterranean island where I  live, the island goddess and guardian is Tanit, the goddess of war, good health, and fertility, and the masculine principle is Bes, the protector of households, mothers, children, and childbirth.

These two aspects of the divine, long ago adopted from ancient Phoenicia and Egypt, respectively, are still very much part of the island culture, despite Christianity being the official religion. Indeed, Ibiza adopts its name from the god Bes and the Roman derivative, Ebusus.

This more enlightened understanding of the universe as a divine union and expression of both the masculine and feminine can be seen in cultures all over the world. In India there is Shiva and Shakti, in ancient Greece, Zeus and Hera, in old Egypt, Ra and Hathor, and in the Norse tradition, Thor and Sif.

Even in Christianity, within its strict theological patriarchy, an instinctive balance is often sought with the passionate devotional worship of Mary, the mother of God. What a fascinating phrase that is: “mother of God.”

It has long been my understanding that the divine, feminine and masculine, are entirely symbolic rather than literal personalities that can be swayed with prayers or promises of piety.

With that consideration, I am mindful not to take part in any ritual, ceremony, or practice asking for favours, protection, gifts, or guidance from the divine—another reason why I declined to join my friend’s spiritual group for men, and also why I stopped being a Roman Catholic more than 30 years ago, much to the chagrin of my parents.

I’m a firm believer that God, the divine, the universe—call it what you will—does not play favourites. The love of the divine is truly unconditional, meaning it does not take sides, nor is it bribed by burning incense, candles, recited prayers, or mantras. If the divine were swayed by such things, what a fickle and fatuous kind of love it would be.

When the hurricane comes, literally or metaphorically, the storm has no concern for who has prayed or chanted, who has accumulated so-called good or bad karma, or who has learned to stand on their head—everyone’s life is turned upside down.

We are all in that storm together, the storm called life. The challenging truth is there are no angels or spirits protecting one person from the flood while another drowns. There are no idolised gods or goddesses on pedestals, seated on mountaintops or in the clouds who are going to help me, but not you. The reality is we must accept full responsibility ourselves, caring passionately and compassionately for one another.

Evidently, it is a primitive fear of an unknown tomorrow that drives us to seek security and comfort from such idolised divinity as the mother moon or a gilded man on a mountaintop. That same primitive fear still drives us today, as it has since human beings began to walk the earth: fear of an unknown tomorrow, driving such head-in-the-sand premises as “tomorrow never comes, the past is gone, all we have is now.”

That primal fear perpetuates one superstition and one religion after another, each promising privileged security, good fortune, a good harvest, or the vanquishing of our enemies.

But this is clearly a false security, an elaborate illusion. No one is protected from the storm of life; the impersonal love of the divine graces us all without prejudice or preference.

The divine gives, the divine sustains, and the divine takes away—no matter our gender, race, religion, sexuality, spirituality or politics. That is what unconditional love truly means.

Only the divine can express unconditional love in an absolute sense, love for all things, good or bad, right or wrong—without prejudice or favour.

Our purpose in this life is simply to express love for one another, and the planet that sustains us, as best we can, for we are each in turn direct expressions of the divine principle. To use an analogy, this universe is like a divine ocean, and each human being is like a wave travelling that ocean.

In that recognition, in that self-realisation, the human ego dissolves, the wave surrenders, and just goes with the universal flow. This self-realised state should not be confused with apathy but rather more accurately called non-action—meaning the wave recognises that its actions (its karma) were erroneously claimed as its own, when in fact each and every action originated from the ocean and is returned, instantaneously, to the ocean. The wave is simply the expression of action (of karma), not the owner of it.

In the Tao, this transcendent state of awareness is called wu wei, meaning “non-action,” in yoga it is called samadhi, “a non-dualistic state of consciousness,”  in Buddhism, anatta, meaning “no-self.” The understanding and consequences of oneness are profound indeed.

But as Einstein once said, “God does not play dice with the universe.” Clearly, Albert knew a smart woman when he saw one.