Why Empaths could be Wrongly Diagnosed as Bipolar. 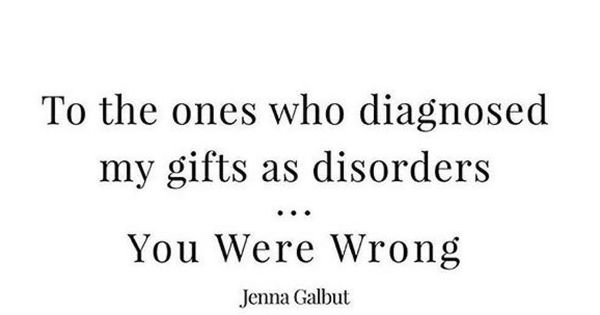 ~
Disclaimer: Please always consult with a medical professional if you have any concerns surrounding bipolar disorder, as it is a serious condition, separate to being an empath, which may require professional guidance, advice, and possibly medication.

I’ve heard many accounts of empaths being wrongly diagnosed with bipolar disorder, and from what I have observed, bipolar seems to be the most likely psychiatric diagnosis received if empaths seek professional advice to cope with their empathetic gifts.

I believe the main reasons for this is that empaths are constantly absorbing the emotional, mental, and even physical energy of those around them, which can make them feel as though they are on an erratic emotional roller coaster that causes them to feel fragmented and energetically overwhelmed.

The main characteristic of bipolar disorder is an intensity of emotions that can range from extreme highs, (mania) to extreme lows, (depression). As empaths soak up other people’s emotions, it can mean that they too can swing from feeling high one minute to devastatingly low the next, which is the reason that empaths may initially think it is due to bipolar disorder. For empaths, the difference is that the emotions do not belong to them—they have been energetically transferred from someone else.

Empaths are highly sensitive to energy and naturally tune into other people’s emotions; they instantly pick up on how others are feeling. This can cause empaths to suddenly feel anxious or drained when in crowds of people, to feel energized or fatigued depending on the people around them, to turn off or avoid news about tragic events, and to feel as though they need downtime to recharge after socializing.

This can offer empaths an in-depth insight into other people’s suffering, which then opens a pathway for compassion and healing. However, it may also mean that empaths react to what they are feeling and sensing as though it is their own experience, which can then cause their emotions to flip from one end of the scale to the other. For example, empaths may absorb the energy from an entire room, causing them to feel blissful, fearful, irritable, and sad—all at the same time.

This may seem similar to manifestations of bipolar disorder. Although bipolar is not yet fully understood by professionals, it is believed to be caused by genetics and an imbalance of neurotransmitters that carry signals to the brain. It can also lead to illogical and irrational thought patterns and behaviours and distortions in reality.

Being bipolar affects everyone differently, and the length of time those states of extreme highs or lows can alter depending on the person and their individual circumstances.

One main difference between bipolar disorder and empaths is that those who are bipolar can become out of control and reckless during these episodes, and the highs and lows can linger for a greater length of time. Empaths, on the other hand, are generally more in control of their emotions and their moods pass more quickly, and they are also less likely to suffer from delusions and irrational thoughts.

Another major difference is that those with bipolar disorder are far less likely to feel empathetic toward other people, whereas, empaths are known to have extremely high levels of empathy and compassion.

The reason I believe that there are blurred lines between empaths and those with bipolar disorder is that both experience intensity of emotions, however, the intense emotions that empaths feel, as I mentioned previously, usually belong to other people rather than being caused by factors in their own lives.

One of the most difficult things for an empath, particularly when they are not aware that they are an empath, is the struggle to work out whether the emotions they feel belong to them, or whether they belong to other people. This means they may frequently take on the joy, love, pain, anxiety, stress, depression, and so on, from other people, near or far, without fully understanding why.

Empaths can absorb these emotions and feelings to such an extent that that they can even become a part of their own internal belief system. They may even lose their sense of identity and begin to believe that other people’s reality is their own, especially if they spend a lot of time around someone who is radiating powerful emotional energy.

If empaths are not aware that they are absorbing emotional energy, they may experience mood swings that can be confusing and even frightening at times, as it can be a challenge to find the logic in them. This may cause them to feel bewildered and struggle to take their emotions by the reigns.

It may also lead empaths to believe that there is something more seriously wrong with them and possibly lead them to seek medical advice. If the medical professional is not aware of the signs and symptoms of being an empath, or the differences between empaths and those who are bipolar, it is possible that a misdiagnosis may occur.

Emotional instability can feel terrifying, especially if we aren’t aware of why we struggle so much to balance our emotions, and why we can’t quite explain why we suddenly feel bombarded with strong emotions.

When empaths take on other people’s emotions and feelings, they notice a sensation that feels like friction in their energy field. Friction happens when we are unclear of exactly what emotions we have absorbed, so the emotions ricochet around our energy field trying to get our attention so that we can process and finally clear them.

The reason empaths soak in energy is because they have the inherent skill of naturally soothing, breaking down, and transmuting negative energy so that it vibrates on a totally different frequency—one filled with love, understanding, acceptance, compassion, forgiveness, and oneness. Therefore, they naturally draw in energy and situations that are highly charged, and often toxic, so they can neutralize the toxic energy and dispel it.

This is why it is vital that empaths discern what is happening in their own lives, as well as what happens around them, and that they pay attention when their emotions suddenly change. This will enable them to know why they are feeling a particular way, where it has come from, and most importantly, whom it belongs to.

Spending a few moments in silence, or meditating, allows us to sift through the vibrations we are feeling, and we can then process our experiences slowly and effectively. Once we have taken accountability and responsibility for our own emotions, we can begin the process of filtering through our recent experiences to trace back what has occurred for us to feel a certain way, or what may have been transferred from the people, or situations, around us.

When “putting ourselves in other people’s shoes,” it is vital to do so without absorbing and taking on the associated emotions and feeling them as intensely as the other person does. Instead, we can empathize without becoming too emotionally entwined and living out other people’s stories as if they are our own. This can take time to learn, as it feels natural for empaths to try to lift low-vibrational energy.

When empaths take responsibility for their own thoughts, feelings, and emotions, they will then understand where their own energy ends and where another person’s begins. This offers them a clearer understanding of what emotional, mental, and physical energy belongs to them and what has been absorbed from other people.

The author of this quote is unknown, but its wisdom is worth considering: “Before you diagnose yourself with depression or low self-esteem, first make sure that you are not, in fact, just surrounded by a**holes.”