It was a typical Wednesday morning.

It was 6:00 a.m. I was getting up for work. However, this would prove to be an unusual morning, as I would soon find out.

The previous night, I mentioned to a friend that I was “late.” As a precaution, I took her advice and decided to take a pregnancy test the next morning. Sleepy-eyed, I stumbled to the bathroom. Without much concern, I opened the test and followed the directions.

While I waited for what I expected the results to be, I went along with my morning routine. When I checked the test, I was stunned. Frozen motionless for what felt like an eternity, I couldn’t believe what I was seeing. I checked the box to see if I was reading the test right—two lines for positive and one line for negative. Why do I have two lines?? In a state of disbelief, I took a picture and sent it to my friend with a text “What the hell?!”

“Maybe it’s a false positive,” she replied. For a split second, I believed her…then snapped back to reality.

A baby wasn’t a part of the plan. To give more perspective, two weeks before this morning, I told my boyfriend that I was moving out. Ending my relationship wasn’t an easy decision, but after some tough conversations and reflection, it was painfully clear this relationship had run its course. I had given my best, but sometimes things aren’t meant to work. I packed up my belongings and secured a new place to call home for my transition. I had to let go and move on. It was difficult, because it seemed to mean giving up the idea of marriage and children too.

Finding out that I was pregnant threw a wrench in this breakup and my image of how my ideal life was supposed to play out. I can’t imagine that anyone plans on being a single parent, and neither did I.

This left many questions and variables for the future—for my whole life. How could I know what to expect, other than a baby? My head spun just to know there was so much I had to do, learn, and recalculate. So, I started with what I knew I could do. I cancelled my plans to go to Argentina—thankfully, before deposits and tickets were paid. I changed my living arrangements and decided to move in with my grandparents. They were local and would be the best emotional support in the months ahead because of our close relationship.

Pregnancy came with its ups and downs. The first trimester was harder than I could have imagined. I struggled to stay awake during the day and fell sleep around 8:00 p.m. each night. During the months to follow, I worked through my disappointment of being an unwed, single mother.

Don’t get me wrong, I’ve always wanted children. I just wanted it to be in the traditional setting: husband, marriage, and a commitment to creating a family and sharing life together. Having a different situation than I had hoped or imagined brought fear, depression, and many other aspects of my shadow side I wasn’t aware of until they surfaced.

Terrified of not having the life I felt best suited for raising a child—and not believing I was equipped with enough parental knowledge before pregnancy—I felt judged and insecure. Determined not to let personal wounds be passed down to my child, I leaned into my spiritual practice for emotional well-being and balance. I knew the best thing I could do for my baby was to be the best person I could be. This meant healing the parts of myself that surfaced since finding out I was pregnant, and I took this challenge head on.

Despite my inner turmoil, I already loved the little person growing in my womb. I was ecstatic to become a mother. I talked to that new heartbeat daily and let her (or him) know I was excited about the day we’d meet. Within my own heart, I knew things would turn out for a greater good, even if I couldn’t see how it would all work out.

As my belly grew, I was slowly able to let go of the judgment, perceived and real. I healed the wounds that brought me pain. I found comfort with my grandmother and friends who’d had similar experiences. With this process, my heart became more open, and I accepted this gift I was given, instead of seeing what I lacked. Somewhere throughout the course of my pregnancy, my heart expanded, and I found a great compassion for myself.

When the day came for me to meet my baby, nothing went as planned…again. It took two days of labor and a caesarean to finally hold my son. Much to my surprise, my son’s father gave care through childbirth by massages and his hand to squeeze during contractions. In the hospital, he made sure to bond with our baby and assisted me post c-section with most of my needs. At this moment, two people came together to care for and support each other for the greater good of someone else—our child.

What a huge gift. It was something I wasn’t sure was even possible given the circumstances. Little did I know just how much this relationship—and all the relationships in my life—were about to take new shapes. I never knew one person could affect every aspect of my being in such a profound way.

Life doesn’t usually go as planned. This doesn’t mean that change is bad—it’s simply different. I believe that to get the most happiness out of life, adaptability and flexibility are key.

I realized trying to fit into a rigid ideal wasn’t how my life was going to be. My relationship hadn’t worked out, but now I have a son instead. He’s four months old now, and while there are many uncertainties, I love this new adventure. He’s made my life and heart fuller, and this is only the beginning of our journey. I am looking forward to the other changes and surprises that come our way.

Oh, and Argentina is still in the plans. When I get there, I will have my little guy by my side. 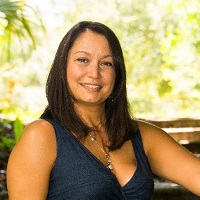