Listen Up Congress: the American People have a Message for You. 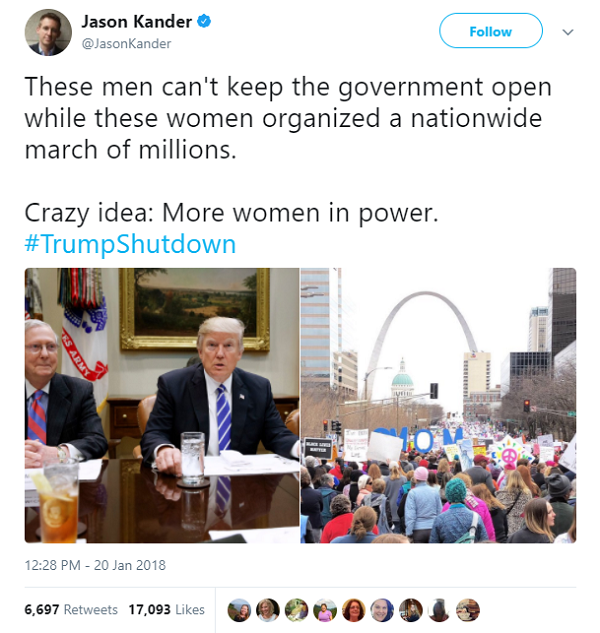 As we’ve all heard by now, Congress shut down the United States government because they haven’t yet learned to compromise, share, or play nicely—things the rest of us learned somewhere around kindergarten.

According to CNN, 9 million children receiving health insurance, 700,000 Deferred Action for Childhood Arrivals (DACA) recipients, 1.3 million active duty military personnel, and about 850,00 government employees will be impacted by the shutdown. While essential government offices, like the postal service, will remain open, many national parks may shut down, in addition to non-essential offices.

But here’s the kicker: during this forced furlough, where so many Americans will go without protection, healthcare, park access, and even pay, Congress will still operate as if it’s business as usual. That means that they’ll also be receiving a regular paycheck.

I have every confidence that a compromise would come quick if each member of Congress were to lose their own pay during this shutdown. I have a feeling that healthcare reform would be improved, as well, if Congress had to actually utilize the healthcare systems they advocate for us. Sadly, they don’t care because this isn’t their reality. But for millions of Americans, we’re talking about decisions that have a real-life impact on finances, families, and health.

Perhaps we should all quote the current President and tell Congress: You’re fired.

In fact, in President Trump’s own words back in 2013, the president himself should be blamed if the government shuts down. After all, Trump reasoned, the President is the boss.

And while Trump and GOP members point the finger at Democrats for the shutdown, Americans aren’t fooled. The Republican party now controls the White House, Senate, and House of Representatives. An inability to obtain a majority vote can’t be attributed to the minority party, although it doesn’t stop them from trying.

Regardless of what political party we favor, the truth is that all members of Congress will receive pay during the time that they are denying government employees and military personnel that same benefit. Hardworking American families will suffer because Congress is too busy playing politics to represent the people they are, in fact, paid to represent.

Senate Majority Leader Mitch McConnell has been trying to leverage the Children’s Health Insurance Program against DACA to curry favor with donors and his party, but he does so at the risk of those ‘Dreamers,’ who were brought to this country as children. And he does so at the risk of Americans of both political parties who depend on those paychecks to survive. This is a move that has obviously failed as many Republicans are in favor of protecting DACA. A compromise needs to be reached, but it could take some time. After all, they aren’t hurting financially while they take their time deciding.

In the meantime, what can the average citizen do to protest this egregious display of incompetence?

>> We need to call, write, email, fax, and message our representatives. Resistbot is a helpful tool to send daily messages to our leaders to let them know we’re displeased with their service.

>> We need to save the date. November 6, 2018, is the date of the midterm elections. We need to make a plan to be there, ready to vote for leaders who are actually interested in making our lives better for a change.

>> We need to participate in voter registration and drives that encourage our fellow citizens to vote. We don’t have to let everyone know who we’re voting for or why, but we can encourage everyone to make their voice heard.

>> We can show up at town hall meetings and other political events to ask our representatives directly just what the hell they think they’re doing and why they should get paid when other government employees don’t get the same benefit.

>> We can participate in peaceful protests or spread awareness on social media. It may not change anyone’s mind, but at least we can let others know that we don’t like this any more than they do.

>> We can stop spreading fake news. Did we check our sources before hitting share? Did we even open up the article and read it first? If it sounds outrageous, it may not be true. While outrageous has been the norm with this administration, we should still double-check for accuracy. Snopes is a good place to start.

>> We can hold our elected officials accountable. Midterm elections are a few months away, but a shutdown now should mean a vote against these people later if they’re showing an unwillingness to settle their own issues while citizens suffer.

It can often seem like nothing we do actually matters. Maybe we feel helpless or just disgusted at politicians doing normal, awful, politician-like things. But we can make a difference.

A consistent public outcry may just push Congress to get it together before paychecks stop. But first, we need to let them know that leveraging one set of children (Dreamers, now grown) against another (healthcare recipients) isn’t the way to reach a compromise. In fact, any parenting class will tell you that we should never pit our children against each other or use them to score points.

It’s time Congress realized that they need a bipartisan solution if they want to keep their jobs come November.