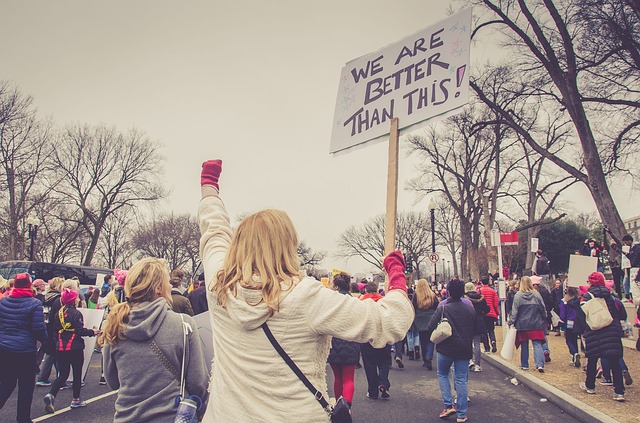 I think that we are all aware of it, in one way or another. Maybe you participated by writing your own story of sexual assault or harassment.

Maybe you didn’t feel safe or comfortable enough to publish your story, but you read through them and related, adding to the issue in your own way.

And maybe you couldn’t relate personally, but you scrolled through your social media pages and felt that punch to the gut that we all felt when we realized just how prevalent sexual assault and harassment really are. That it is something that affects our friends, our family, and our loved ones—not just faceless strangers on the internet or characters on TV.

Now, I have to admit, when the #MeToo movement first began, I was both optimistic and concerned. Optimistic because, well…good. Sexual assault and harassment are issues that we need to talk about. They are important, and historically speaking, we haven’t talked enough about it.

So, yeah, I could bore you with statistics until the cows come home, and then I can bore the cows, but I think I’ve made my point here: this is an issue that we need to talk about.

But, that being said, when the #MeToo movement first began, I was a little bit concerned because this wasn’t something that I wanted to be trending on Twitter for a couple of weeks, and then vanish into obscurity like we never said anything. This is an important issue; we need to keep talking about it.

But, much to my delight and surprise, the #MeToo movement didn’t quite fall into obscurity. Instead, it took on a sort of life of its own; over and over, we started to recognize the faces of sexual assault and harassment. Not only did multiple celebrity victims begin to stand up and explain their experiences—like Rose McGowan, Salma Hayek, and Anthony Rapp—but multiple celebrities found themselves accused of sexual assault and harassment as well, such as Harvey Weinstein, Kevin Spacey, and Louis C.K. Now, we were not only talking about these issues, we had faces to put to these issues.

And, again, I was both encouraged and pessimistic. I mean, yay, not only are we talking about this now; we’re naming names. We’re calling the perpetrators out and holding them accountable for their actions. But my problem was, we were only calling some of the perpetrators out.

Sexual assault and harassment are widespread issues. Issues that don’t happen exclusively or even primarily to powerful women in the public eye. In fact, while sexual harassment is pervasive among all industries, it is especially common in low-wage service jobs. There is also plenty of research that suggests that women who work in male-dominated fields experience harassment more frequently than women who work in balanced or female-dominated fields. And this is just in the workplace—it doesn’t even cover sexual assault in the home (roughly 25 percent of rapes are committed by a romantic partner), at school, at social gatherings, or on the street.

Sexual assault and harassment are not Hollywood issues. They are global issues. They affect all of us, and we all need to be talking about it. So as much as I’m glad to see abusive men who are addicted to power, like Weinstein and Spacey, get punished for their crimes, we cannot stop with them. We can’t get so caught up in what’s happening in Hollywood that we forget that it’s happening here, and everywhere, too.

You can visit the movement’s website here, and read more about what it stands for. And, yes, it is a movement that has been promoted and headed by celebrity women, but the intention is not only to spread awareness about sexual assault and harassment in the entertainment industry, but in all industries.

The purpose of the #TimesUp movement is to say, definitively, that time is up. As the website states, “The clock has run out on sexual assault, harassment and inequality in the workplace. It’s time to do something about it.”

No more watching a strange man groping a women on the bus and pretending you didn’t see it.

No more shrugging catcalling off as a “compliment.”

No more doubting victims when they come forward and saying that they “just want attention.”

No more giving rapists lighter sentences, just because it might have a “severe impact” on the disgusting criminal’s life.

We are done with this. We are demanding change. Time is up, and I am now convinced: we will no longer be silent on these important issues.

And to those who reacted against the #MeToo movement, calling it a “witch hunt,” and complaining that they can’t even hug women anymore, I have only this to say: this is not a witch hunt. This is not randomly accusing innocent people (it is estimated that only two to six percent of sexual assault accusations are ever false).

This is starting a discussion that we should have had centuries ago. Because for my whole life, rape culture has just been accepted and tolerated. My whole life, I have seen girls blamed for the invasive actions of their male peers, whether it be a little girl scolded by their teacher because a little boy wouldn’t stop tickling her (“What sort of message do you think that sends to him?”), or grown women being asked why they didn’t just dress or behave differently to avoid being raped.

We need to talk about this. We need to think about this. And if someone asks us not to hug them because it makes them feel uncomfortable, or if someone tells us that something we said offends them in this time of change, then we should take a moment before that knee-jerk defensiveness kicks in to ask ourselves why they feel this way. They might have a valid and important reason that deserves consideration.

This is not a witch hunt. This is not unfair. If someone has never sexually assaulted or harassed anyone, then they will not be accused. If they have sexually assaulted or harassed someone, then they deserve to be accused and held accountable for their actions. That’s the way this should work, and the way that it hasn’t worked for too long. But the world is changing. Society is so accustomed to letting these perpetrators get away with their crimes, but they won’t any longer.