How the Role of Teenage Girls is affected in a Misogynistic World. 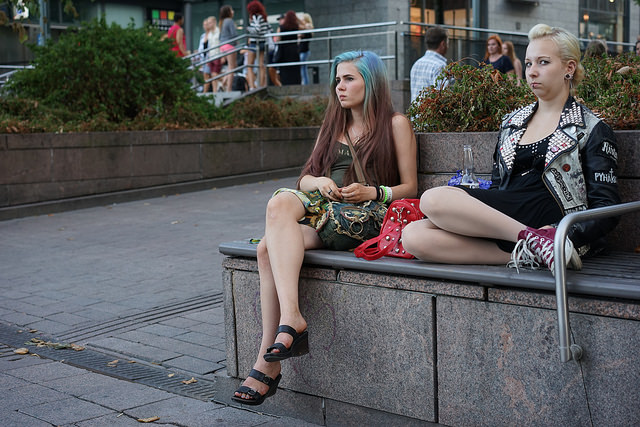 When I was born, the doctor took one quick look at me and announced to everyone in the room, “It’s a girl!” and my mother was overjoyed. Because now, she had someone to dress up and make pretty.

For the first 12 years of my life, I was a doll. A little porcelain doll, really, with blonde ringlets and pink bows and dresses made of velvet and lace. I wore white stockings and hair ties and braids.

I smiled big, and I batted my long lashes, and I knew I was pretty. Everyone I encountered told me I was pretty—from strangers, to old men in the hallways of my apartment, and women who threatened to take me home with them or gobble me up.

Around the age of 12, however, my prettiness began to fade. I was too tall and too skinny now—all awkward proportions and acne. My teeth were full of gaps that made me smile less, or at least smile smaller. I no longer got compared to princesses and fairies, but to hockey players who had taken a hit to the face one too many times.

It was around this time that I became more aware of the comments that were made about that initial announcement from the doctor, as well; insinuations about all those people who got told, “It’s a girl” from the delivery room. Girls were stupid, I heard. Girls were weak. Girls were vapid and frivolous and vain, and they couldn’t be taken seriously.

Well, if that’s the case, I thought, then why would I want to be a girl?

I went up to my bedroom, opened my closet, and ripped out all the dresses of velvet and lace, all the pink bows and white stockings, and I threw them all away. Everything left in my closet was black.

And thus began my descent into one of the most universally mocked groups of people in North America: I became a teenage girl.

Between the ages of 13 and 18, a lot of my time was spent trying to prove that I was different from them. Because whatever they did, there always seemed to be something wrong with it.

They listened to vapid pop songs made by people without talent who used Auto-Tune for everything. Yes, I thought these songs were fun, albeit without substance, and fun to dance to—but I’d never admit this, though, because if they liked it, then I decided to like something totally different and retro (retro synth-pop music, but whatever—it’s totally different, man).

They read and watched Twilight, so, of course, I abhorred it, along with everyone else. I didn’t connect the fact that, while the girls my age were ridiculed for liking Twilight, the boys my age were praised for liking Michael Bay’s “Transformers” movies or the “Fast and the Furious” franchise.

They took selfies, which made them open-season for widespread mocking, because it obviously meant that they were stupid and vain and self-indulgent, so, of course, I was too good for that.

They drank pumpkin spice lattes, so, of course, I drank green tea.

They caused drama and liked to talk about their feelings. I remained silent.

But I was still treated like them. If I posted one picture of myself on social media, the immediate assumption was that I thought I was so good, and I was so vain, and did I really think that everyone wanted to see that? I still had simple things explained to me like I didn’t understand them. I was still condescended to and shut out of certain male-oriented spaces and sexualized, even when I didn’t dress or act like them. Because the truth is, anyone who demands that you not act like a woman in order to earn respect is not the sort of person who respects any woman.

And, between the ages of 18 and 23, I began to realize that there was nothing wrong with being them, not really.

Taking selfies does not make you any less of a person.

Pumpkin spice lattes do not make you any less of a person.

Listening to boy bands and popular music does not make you any less of a person.

We, as a society, simply like to judge and criticize anything that is connected to a primarily female audience. And maybe nowadays it isn’t Twilight that gets all of the hate, but instead it’s movies like the 2016 “Ghostbusters” reboot or “Oceans 8.” If young women have the opportunity to enjoy something or see themselves in it, then the knee-jerk reaction that society seems to have is to belittle it or call it stupid, or at the very least, to hold it to a much higher standard that anything connected to a primarily male audience.

And especially when you’re growing up and still trying to find your identity, like teenage girls are, what this creates is a need to distance yourself from…yourself. You try to change to please people. You refuse to enjoy things because you don’t want to be mocked and belittled. You watch your every movement, trying to make sure that you can be considered respectable and good. And despite all of this, you still fail.

So when you reach adulthood, you have two choices: you can continue to enforce this idea that the things teenage girls do are stupid. You can keep chasing this mythical idea of becoming a woman worthy of a misogynist’s respect—except that will never happen. All you will accomplish is denying parts of yourself, and making other women feel bad about themselves.

Or, on the other hand, you can just say f*ck it and be yourself.

I chose the latter.

I wear makeup and dance to pop music and dye my hair pink, all while sipping on my Starbucks Frappuccino, thank you very much. I don’t go out of my way to do these things; I just do them without guilt now.

And nothing that I have listed in this article hurts anyone. What hurts people is a misogynistic society that immediately assumes that, just because someone was born to the words, “It’s a girl,” then that automatically means that they are destined to a vapid and stupid existence.

That is what I truly think is wrong.