What do the “Middle Ground” Politics the Founding Fathers believed in mean Today? 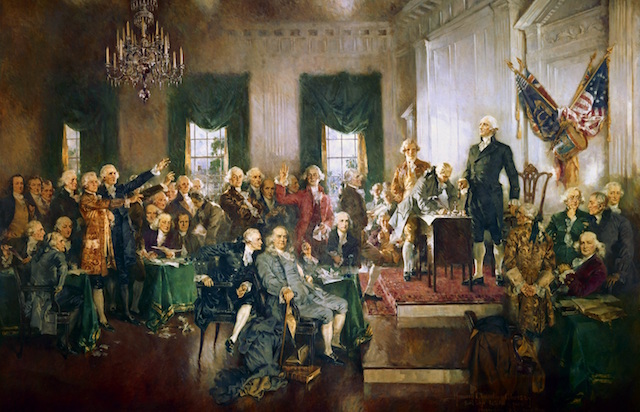 I went to the University of Colorado campus on a snowy Monday evening on February 19th to listen to Dr. Paul Carrese’s talk on “Tocqueville’s Philosophy of Moderation and America’s Need to Rediscover It.”

Dr. Carrese is the Director of the School of Civic and Economic Thought and Leadership at Arizona State University. His lecture covered the subject of a moderate approach within the realm of American politics.

As a political theorist, Dr. Carrese relied on French philosophers Montesquieu and Tocqueville’s respective ideas of moderation. Both philosophers agreed that democratic systems should be designed in a way that moderates political extremes in order to prevent tyranny.

Dr. Carrese illustrated how their vision for democracies was achieved in the design of America’s political system as the extremes were debated, eventually leading to the ratification of the United States Constitution. The debates that took place over several years were written in a series of letters known as the Federalist Papers. Ultimately, our Founders reached agreement and created a system that did its best to curtail extremism in America in favor of moderation.

Overall, Dr. Carrese’s intent for the talk was rooted in old virtues and a moral philosophy that is no longer relevant in the age of Trump, but idealistic and noble in theory. He argued:

“In a time of intense polarization in both American national politics and higher education, the occasional calls for civility or intellectual tolerance often lack a firm grounding in our political tradition or in philosophical argument. In fact, the concept of moderation has a long pedigree and deep foundation in both our politics and in the political philosophy of modern liberal republics and democracies; it means more than a mushy centrism.”

The long pedigree and deep foundation that he refers to are the ideas of Enlightenment philosophers like Montesquieu and Tocqueville, who both believed that a separation of powers was key to achieving moderation in politics. Tocqueville saw apathy, due to a lack of an informed citizenry, as a pathway to extremism when he wrote Democracy in America in 1835. Both agreed that an effective democracy required an educated citizenry willing to actively engage in the political system.

Both political philosophers also believed that the goal of any political body should be to identify a middle ground where broad-based consensus is reached without veering too far to any extreme by incorporating checks and balances that ensure tyranny is less likely to take a foothold.

Dr. Carrese seemed to argue that to achieve this goal today we need to do the following:

The third argument was the most interesting from my point of view. He admitted that we would need to explore the concept of sustainability further, but believed it may offer a bridge between conservative and liberal world views—a fairly progressive idea for someone who sounded like an archaic idealist steeped in a conventional-traditionalist interpretation of political theory.

The ideas he drew upon hold little weight without understanding the causes of extremism in our current politics.

One of the factors that contributes to extremism is the lack of an educated citizenry who holds the ability to think critically. For any of us to draw upon the “deep foundation of knowledge” related to moderation as articulated by Montesquieu, Tocqueville, or other moderate Enlightenment thinkers, we would need an educated and informed citizenry that continuously questions the system and finds fault and seeks to improve.

Education is vital to a vibrant democracy.

In a society where we promote money, nationalism, and militarism over all else, particularly education, the task of addressing extremism in our politics is increasingly difficult. The lack of education in America is a deep fault line in our system that leads us to having a citizenry that is incapable of thinking critically about arguments presented, whether from the left, right, or center. However, I do not agree that we need to limit citizens’ participation. We need to educate citizens so that they can participate more effectively and share ideas as to how we might collectively and continuously improve upon the system.

One only need read the news to learn how many Americans were easily duped by Russian propaganda in favor of President Trump. Trump’s election and the ease with which the Russians (and Trump as their patsy) exploited the ignorant in America are clear examples of the consequences of not investing in education. As the old saying goes, “If you think education is expensive, try ignorance.”

We’re all paying the price now.

A lack of education facilitates extremism and undermines the possibility of moderate politics in America. It enables extremist views, and Constitutionally-ignorant populist plutocrats like Trump to exploit the ignorant for their own political and economic gain. Sadly, Trump and his enablers do so at the expense of our constitutional democracy, and a moderate politic. Dr. Carrese concluded:

“Americans today would do well to study Tocqueville’s counsel about the virtue of avoiding extremes in thought and practice, and of reasonably reconciling apparently opposed principles.”

I agree—but for Americans to do so, we have to educate them. And we can’t educate them if we’re spending nearly a trillion dollars on wars, covert operations, and hyper-militarism, while cutting an already paltry education budget at both the state and federal levels.

Americans’ lack of education is now a national security threat to the United States. It makes it impossible to recruit voluntary soldiers and fuels both extremist ideology and the possibility for foreign governments, like Russia, to use that ignorance to drive a wedge between us through the dissemination of propaganda and lies. As Mark Twain said, “A lie can travel halfway around the world while the truth is putting on its shoes.”

The rapid dissemination of information, true or false, makes it easier for our enemies to further promote extremist ideologies in America via social media and other internet-based propaganda platforms that undermine the moderate norms established by our Founders in 1787.

What better way to destroy the moderate than to elevate the most extreme positions on either side of the debates by exploiting our own ignorance while adding in conspiracy theories, fake news, and then supporting a patsy, Trump, to attack America’s legitimate institutions?

To make matters worse, we now lack moderate congressional representatives for the same reasons, thereby fueling the beginning of a positive feedback loop that could erode any possibility of moderation in American politics into the foreseeable future. No actions are being taken by Congress to address the Russian meddling that has already begun in relation to our 2018 election cycle.

Our Achilles’ heel has now been discovered: American ignorance. And so, here we are with Donald Trump as president, unwilling to defend our national security after the most damaging covert operation in history was perpetuated on our constitutional democracy. Now is the moment in our history most feared by our Founders at the Constitutional Convention: soft tyranny has arrived, and our own apathy and ignorance may lead to our demise.

To overcome it we need huge investments in an educated and informed citizenry, not only for our future, but for our nation’s security.