How one Dog’s “Last Good Day” Changed my View on Grief. 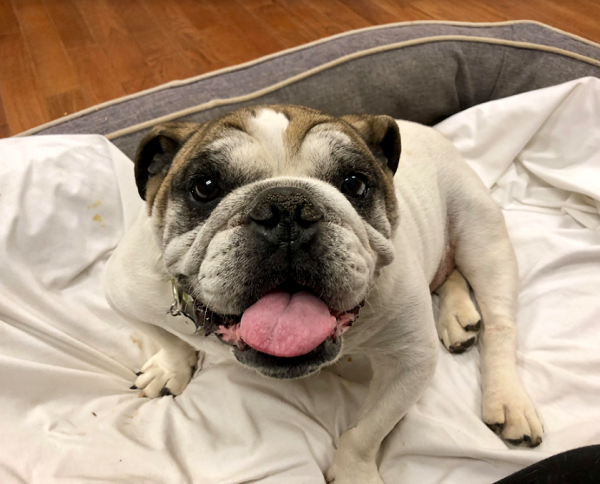 “Grief is like the ocean; it comes on waves ebbing and flowing. Sometimes the water is calm, and sometimes it is overwhelming. All we can do is learn to swim.” ~ Vicki Harrison

When I read the email, my first thought was: I hope my daughter doesn’t see it.

We had been through so much with my fiancé’s passing from a massive stroke, and more bad news seemed too much to bear.

A friend had donated an adoption fee at a local animal rescue shelter in my love’s honor. My daughter had picked a bull dog, Alexander, and we were anxiously waiting to hear about his adoption—hoping that something positive could happen from our tragedy.

But then the email: Alexander is too sick to be adopted. Would we allow the rescue to use our donation toward his hospice care instead?

Absolutely, I replied, with a familiar ache in my heart. My fiancé had also been in hospice, so supporting Alexander’s time there seemed appropriate.

“Can I come see him?” I felt connected to Alexander. And hoped that I could help him with Reiki energy healing, as I had for my lost love.

The executive director of the rescue agreed and arranged to be there with me when I finally met Alexander.

I found him sitting in a large dog bed. His breath was labored, but the nub of his tail wagged when he saw me. He was 50 pounds and displayed a “jacked-up” physique—a trait desired by puppy mill buyers. His spindly arms were deformed in opposing 90-degree angles and his overweight body was too much for them. He could barely walk and had bed sores on his elbows from sitting so much.

My fiancé had severe back issues and had trouble walking too at times.

Alexander had been bred to have so many wrinkles on his nose that his breathing was completely constricted.

My human love also experienced intermittent difficulty breathing and had to use an inhaler most days.

The similarities between this ailing dog and my fiancé comforted me.

As I sat down with him, I tried to center myself. I was here to help, and the dog wasn’t going to be comforted if I started crying. Dogs sense energy and my purpose was to ease his pain—not dump mine on him.

I asked about the decision to put Alexander in hospice.

The executive director shared that when he was returned to the rescue they realized immediately he couldn’t be adopted. He was too disabled and his breathing too labored. Instead, she took him home to administer hospice care, which involves giving him medication, care, and love until it was time to let him go with dignity.

“We don’t wait till the dogs are miserable and a complete mess,” she said. “We let them go out when they are still okay.”

They have a process. Every dog deserves a good last day. So, they go to McDonald’s and get a hamburger and French fries and let the dog eat a picnic in the back of their truck. And then they take them to the doctor’s office.

She reminded me that the dog doesn’t know what’s happening. He just thinks he’s going to the vet, and then he goes to sleep.

With my recent experience, I compared how we treat dogs versus humans.

“It’s amazing—for how sh*tty we are to animals, we manage to give them a good end. We can abandon, beat, and even shoot dogs, but are permitted to be humane in their death.”

And then our stories came rushing out. We all have them—about people we love who are terminal and transitioned to hospice care.

We eat while they cannot. We drink while they dehydrate. We breathe comfortably while they gasp for air.

And we love them and allow this to happen. Because it is all we can do.

There are many times I have envied a dog’s life. The capacity to love unconditionally. The ability to forget and forgive pain that has been afflicted. Their joy at smelling a recently tinkled bush. And the endless naps.

But perhaps I envy the gift that is bestowed upon them in death the most.

And maybe because of that gift, we handle their deaths better. We grieve quite deeply for them, but we find peace with our decision to end their life. We say it’s the humane thing to do. We love them enough to take this necessary action.

As our conversation drifted off, the room became quiet. Alexander had become still and his breathing less labored.

I looked into his eyes and put my hands gently behind his ears, hoping my love and energy would provide comfort.

The time went by so quickly. I didn’t want to leave him, but I had a flight in the morning to a yoga retreat, and many things left undone.

I kissed Alexander on his head and said, “Look up my love for me—he is the reason I adopted my first rescue. He will absolutely love you.”

I let the tears out as I drove away. My daughter sensed the need to call me and I answered the phone. I told her about Alexander and how adorable and loving he was.

And for the second time in weeks, I reassured her the right decision had been made—and that yet again—it was meant to be.

“What we have once enjoyed we can never lose; all that we love deeply becomes a part of us.” ~ Helen Keller

How to Survive the Loss of Someone we Can’t Live Without.

Donna Yates Ferris is the author of  “We’ve Got to Stop Meeting Like This – A Memoir of Missed Connections.” She lives in West Chester, Pennsylvania, … Read full bio