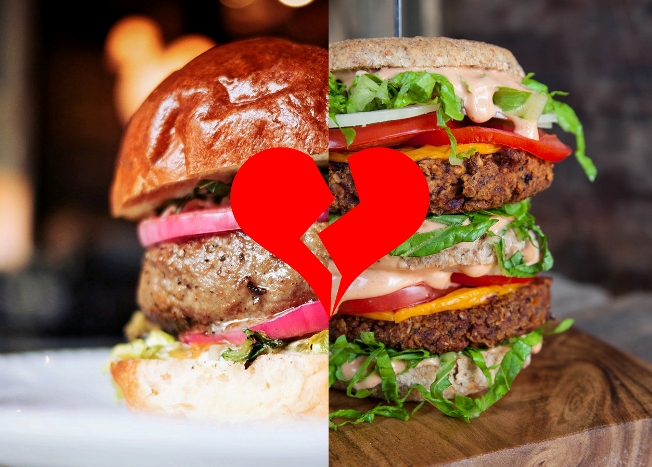 “We are doomed,” he agrees and orders another. Each drink comes with a complimentary tapas plate and, although the restaurant is happy to prepare these tiny snacks without animal products, my partner is struggling to accommodate my lifestyle.

To me, this means that we have a lot in common. We both spend a large portion of our day preoccupied with thinking about, preparing, and eating food—and talking about fragrances, textures, flavors, and balance.

Unfortunately, to him, my aversion to foods that I don’t eat is a near-deal-breaker quality. He says that he can’t share his biggest passion with me, at least in the way that he wants to. We’ll never be able to share sushi rolls, eggs benedict, or a piece of cheesecake; we’ll never be able to motorbike around Asia together, exploring the street food. He won’t be able to come home from his (hypothetical) job inspired to create new specials and bounce his menu ideas off of me, since I’m disgusted by a lot of what he loves.

At the beginning, things were easy—for me, that is. He majorly adjusted his diet so as to not offend me. When he ate meat, I stayed away. He would brush his teeth before we’d kiss. Things were fine. But I wasn’t the one who changed.

Then one day in Guatemala, my boyfriend killed a bunny.

Feel free to read the gruesome details if you’d like. If not, I’ll summarize. He came home from his farm-to-table restaurant job after something like a 14-hour-long day, with metaphorical (and maybe some actual) blood on his hands, in a moral quandary over what he had done.

And here I was, his loving best friend, unable to empathize. I couldn’t say, “It’s okay dear that you smashed the life out an animal, tore it apart, and cooked it for these privileged tourists to eat.” I couldn’t say, “I know this must be hard on you. I understand.” And I couldn’t just leave it alone, either. In fact, I couldn’t think of anything besides the fact that I was dating a murderer.

I wondered if this made me hypocritical.

We somehow managed to get through this. And then through some time in Mexico when he went out every day by himself to eat el pastor tacos, cow tongues, and other processed animal parts that I’d rather not think about. We managed throughout the next six months in the United States, when I’d leave his butter and cheese dishes dirty on the side of the sink for him to wash on his own with a separate “not vegan” sponge; when we ate out of separate ice cream pints because coconut-based dessert will never be as creamy as real dairy; when he would wander off at the farmer’s market to order grass-fed beef, conceal it in a paper bag in the “not vegan” refrigerator drawer, and cook dinner outside of our house on a camping stove because we agreed no meat in the kitchen. He really did try.

There were several times when I questioned if perhaps I was being ridiculous. How had a small decision about something so insignificant to others as my diet come to affect my entire lifestyle and most of my relationships?

I considered trying to change. Throughout the course of a year, I went from being nauseous from the smell of eggs to learning how to poach one. There were two points last year when I actually ate a (nearly microscopic) bite of egg in hopes that I could change my eating habits to be more adaptable to life’s circumstances. After nearly a decade of actively keeping a diet free of animals and their byproducts, this was a big deal for me.

To me, we were both compromising. To him, the compromise was too much.

I remember being curled up in a fetal position and sobbing my face off after I was dealt the dreaded I don’t think I can do this anymore.

Between hyperventilations, I asked, “Are you breaking up with me because I’m vegan?”

He answered something like, “I know it’s sh*tty, but I think so.”

Five months down the road from the end of our time together, I sit alone in Southeast Asia, experiencing these incredible new foods and flavor combinations—Khmer curries, sticky rices, and an assortment of colors of peppercorns straight from the plant—none of which I can share with my best friend, the chef, because he’s not here. And I begin to wonder:

Shouldn’t it be easier to have a healthy mixed-dietary-philosophy relationship? Is something wrong with me that I can’t passively sit back and watch a loved one act against my values? Am I alone in that I’m so particular about lifestyle preferences that they take over my life, or do others suffer from scenarios so seemingly silly?

A wise man (my vegan sister’s meat-eating-husband’s father) once pointed out to me that, so long as there are lifestyles that we are close-minded to, we’re not as open-minded as we think we are. I shrugged it off at the time, but there really is something to this idea of acceptance.

With the goal of acceptance in mind, the issue then becomes how to find balance living with not-so-typical ethics in the existing world. And it’s here that I’m confounded.

If you can at all relate to this dilemma and have insight to share, I urge you to do so. 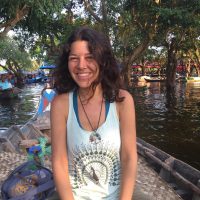