What Bono taught me about Human Rights. 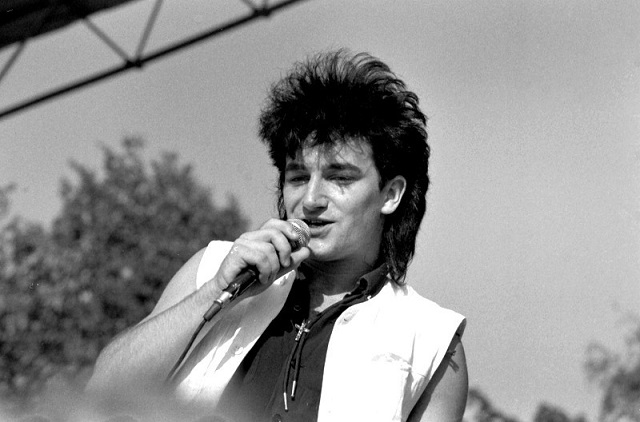 Who isn’t familiar with the band U2?

This is clearly a rhetorical question, given that loads of people know this band that has been together since 1976, producing albums and epic concerts that have drawn people from around the world—and over multiple generations.

I’m headed to Tulsa, Oklahoma, where U2 is about to open their “Experience + Innocence” tour at the BOK Center on Wednesday evening, May 2nd. I’m going because I love music, but in particular, U2’s music.

I’m also going to this show because my older brother, Lance, who is disabled and suffers from Spinocerebellar ataxia type 8 (SCA8)—an inherited neurodegenerative condition characterized by slowly progressive ataxia—asked me to take him to the opening show of U2’s tour for his birthday.

My cousin, Marcus, first introduced me to U2 when I was about seven years old. It was the early 1980s, and the album cover looked cool—and the music sounded even better! At that age, I couldn’t have located Ireland on a map if you had put a bucket full of candy in front of me, but I thought it was cool that they were Irish.

Back in the day, I could have never have known that U2 would one day become one of the top 25 bands of all time, in terms of album sales. Nor could I have known that the lead singer, Bono (Paul David Hewson), would be one of the most recognized artists in the music industry. His success has produced a net worth of over 590 million dollars, and the band has sold more than 150 million records worldwide, which is quite the accomplishment.

If life were measured by fame and fortune, these metrics would be awesome—but, I’m more interested in Bono’s role regarding human rights. For me, the real measure of a human isn’t fame or fortune; it’s how much anyone is willing to be of service to people and the planet, while defending the rights of all humans to live a dignified life.

According to the World Report on Disability: “More than one billion people in the world live with some form of disability, of whom nearly 200 million experience considerable difficulties in functioning,” like my older brother Lance. The majority of those with disabilities have not secured basic human rights and suffer discrimination daily.

It’s easy to forget that the struggle for freedom and human rights continues daily for most people around the world and in the United States. If you need proof, watch the President of the United States, Donald Trump, mock a reporter with disabilities. My larger point is that basic human rights have not yet been secured for people worldwide, and bringing them to our attention is important. If it takes writing about U2 to draw attention to the issue of human rights, I’m doing it.

With democratic ideals eroding and the rise of authoritarianism in the U.S. under Trump, in European nations like Poland and Hungary, in Middle Eastern nations such as Turkey, Latin American countries Venezuela and Nicaragua, and in the Philippines in Southeast Asia where democratic structures corrode from within, while authoritarianism is further entrenched under Putin’s autocratic rule in Russia—it’s critical that we pay attention to the recent pronouncements of people like the former U.S. Secretary of State Madeleine Albright. She warned of a new fascism—and of Trump—in a recent article in the New Yorker. Each of us should take a moment to appreciate human rights and those who advocate to secure them.

I met Bono, The Edge (David Evans), Larry Mullen Jr., and Adam Clayton, while living in Dublin, Ireland, studying for my master’s degree at Trinity College over the years 1998 and 1999. No, I didn’t choose the location of my master’s degree based on where the band originated, or because I later learned that part of my family migrated from Ireland to the United States.

I chose Dublin based on the merits of the master’s program in “International Peace and Conflict Studies” at the University of Dublin, Trinity College. The program, which focused on examining the sources of war and armed conflict, emphasized methods of preventing and resolving them through peacebuilding. Human rights were a core part of the curriculum and an issue important to me for obvious personal and familial reasons.

Once I settled in Dublin, I began volunteering for Amnesty International, an organization focused on “inspiring people against injustice to bring the world closer to human rights and dignity for all,” including people with disabilities who are often treated as second-class citizens.

In order to address the issue of human rights, the international community came together after World War II and created the United Nations system—and soon signed the Universal Declaration of Human Rights (UDHR). This was a logical choice, given that Adolph Hitler had just sent millions of Jewish people to the gas chambers to be slaughtered.

The United Nations General Assembly met in Paris, France, to sign UDHR on December 10, 1948, as “a common standard of achievement for all peoples and all nations.” However, to meet its goals, it required that all of us defend human rights in the U.S. and abroad.

Amnesty International understood this fact and decided to launch their “Get Up, Sign Up” campaign to honor the 50th anniversary of the Universal Declaration of Human Rights on O’Connell Bridge in central Dublin in 1998. I was eager to get involved, as I had spent part of the summer with “Volunteers for Peace” in Ancona, Italy, to help organize a “Human Rights and Freedom Festival,” also in honor of UDHR’s 50th anniversary.

When I learned that U2 was going to be launching the campaign for Amnesty in Dublin, along with other notable figures, I couldn’t believe it. I pinched myself, wondering if I was going to get to meet the gents from a band that I had been listening to since I was knee-high to a blade of grass…and I did!

It was a cloudy day, but it wasn’t raining, which is a miracle in Ireland. The band met us at the Amnesty offices near the River Liffey. The volunteers were introduced to the band, and then we escorted them along the Liffey, with their security detail of course, to O’Connell Bridge where they spoke about the importance of human rights and launched the campaign.

I knew it was an important event. The 1990s were plagued with human rights violations in Eastern Europe, Rwanda (nearly a million slaughtered), and elsewhere. In Europe, Slobodan Milošević was leading a process of ethnic cleansing, forcing Muslim Albanians into neighboring countries, eventually leading President Clinton to bomb Milošević in order to defend them. Yes, the U.S. was once an ardent defender of human rights, even when it was Muslims who were subjected to human rights violations; oh my, how things have changed in 20 years.

In February 2018, I wrote about Milošević in an article titled; “We want a Revolution—as long as Someone Else will do the Dirty Work.” I explored what happened in the former Yugoslavia and opened with a reference to Bono, Luciano Pavarotti, and Brian Eno who came together to produce the song, “Miss Sarajevo.”

“Miss Sarajevo” was a song of resistance and an attempt to draw further attention toward the human rights issues in Bosnia and Herzegovina in the 1990s; it was a cause to which Bono had clearly dedicated himself. And now, Bono stood on O’Connell Bridge continuing to do just that.

The Amnesty campaign in Ireland followed the signing of the Good Friday Agreement in 1998. The goal was to raise awareness of the Universal Declaration of Human Rights among the Irish public and to highlight specific cases of human rights abuses, like those in the former Yugoslavia. After the campaign was launched, the Irish rallied to the cause. After 800 years of oppression by British Imperialists, it was no surprise the Irish would come out fighting for something that mattered.

In Ireland, we generated hundreds of thousands of pledges to the Declaration; it was one of the biggest successes for human rights activism in Ireland. Collectively, the signatures were presented, along with over 10 million others from 105 countries, to the U.N. Secretary General, Kofi Annan, at a special ceremony at the Palais de Chaillot in Paris to mark the 50th anniversary of UDHR.

This year marks the 70th Anniversary of UDHR. Our efforts to defend human rights are just as important as they were in the 1990s, particularly as over 700,000 Rohingya Muslims are forced to flee or be slaughtered at the hands of the Burmese government today. Meanwhile, Trump and European leaders sit idly by as most Americans remain glued to the television and their devices, consumed with fame and fortune. Maybe it’s time for another campaign, but this time it should be called “Get Up and Act.”

I can assure you that on Wednesday night, May 2nd, I’m not walking into U2’s opening show to see a performance; I’m standing up and dancing in honor of a band (and a man) who have worked their entire careers to use their platform to defend the human rights of all people—including ethnic minorities in far-flung places around the world, people with disabilities, like my older brother, and those suffering with AIDS. My fingers are already dancing on this keyboard to use this opportunity to inform others about the cause of human rights and the 70th Anniversary of UDHR.

Perhaps, during this tour, U2 will reach innocent new audiences—those who haven’t been witness to the blood of history and the worst of humanity. And, as U2 sings songs like “Sunday Bloody Sunday“—the first song on their 1983 album, “War,” and now one of the most famous political protests songs in history that brought attention to the British troops who shot and killed unarmed Irish civil rights protesters and innocent bystanders in Derry—maybe those of us with more experience (those of us who have witnessed these wars, while listening to their music since the late 1970s and early 1980s), maybe we can share a little about what we’ve learned is worth defending: human rights.

If we do, U2’s tour, “Experience + Innocence,” will be another success in the long trajectory of this band’s career, and for the cause of human rights.

We want a Revolution—as long as Someone Else will do the Dirty Work.