The Benefits of the Green Smoothie. {Bieler’s Broth Recipe} 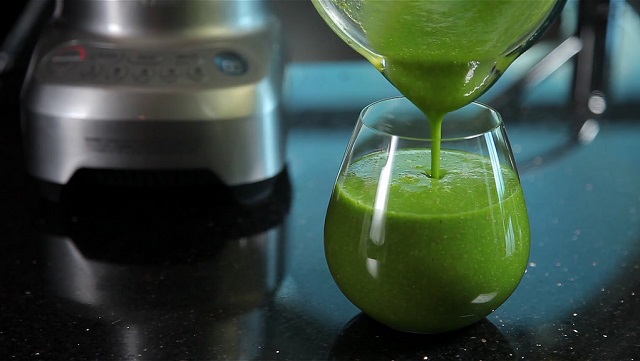 I was first introduced to Bieler’s Broth in the early ’80s as a fasting tonic to repair the digestive system.

At the time, I was in chiropractic college in Los Angeles, and I was fascinated by traditional healing practices.

Dr. Henry Bieler, who passed away in 1975, was a pioneer of alternative medicine. He practiced just minutes from my school, and his legacy loomed large on campus.

His 1965 best-selling book, Food Is Your Best Medicine, rang so true to me then, and even truer now—some 38 years later! His premise for health was simple: “My position is improper foods cause disease; proper foods cure disease. Nothing else needs to be said.”

Whole foods were his mantra, and his Bieler’s Broth—which included celery, string beans, zucchini, and parsley—was a remedy he used to heal and repair the body’s delicate intestinal lining while alkalizing the blood to support the natural detoxification pathways.

If you follow my blog, you may have noticed that I strongly support kind and gentle care for the delicate intestinal skin, and often suggest different protocols, methods, foods, and herbs to strengthen and restore the natural detox pathways of the body—with special attention given to the lymph, liver, and gallbladder.

The more I learned about Ayurveda and how to repair the intestinal lining, the more I loved Dr. Bieler’s wisdom and his green smoothie.

The famous and wise Dr. Bieler left us with three conclusions that support time-tested Ayurvedic principles:

1. “The primary cause of disease is not germs. Rather, I believe that disease is caused by toxemia, which results in cellular impairment and breakdown, thus paving the way for the multiplication and onslaught of other complications.”

2. “My second conclusion is that, in almost all cases, the use of drugs in treating patients is harmful. Drugs often cause serious side effects, and sometimes even create new diseases. The dubious benefits they afford the patient are, at best, temporary. Yet, the number of drugs on the market increases geometrically every year as each chemical firm develops its own variation of the compounds. The physician is indeed rare who can be completely aware of the potential danger from the side effects of all of these drugs.”

3. “My third conclusion is that disease can be cured through the proper use of the correct foods. This statement may sound deceptively simple, but I have arrived at it only after intensive study of a highly complex subject: toxemia and endocrine chemistry.”

These conclusions are ultimately why I chose to use the Bieler’s Broth formula as part of my two-week digestive detox and lymph cleanse, the “Colorado Cleanse.”

How to Make the Green Tonic (Bieler’s Broth).

The Green Tonic is a big part of the first four days of the Colorado Cleanse, known as Phase 1.

For my readers who have not done my Colorado Cleanse, the Green Tonic is most enjoyed either as a drink—to be consumed at room temperature—or as a soup, served hot.

Below is the recipe for the Green Tonic. This makes about two (8-ounce) servings.

While the above recipe is recommended, if you need variety, you may use any of the greens from our seasonal grocery list.

The Benefits of the Green Tonic (Bieler’s Broth).

Each of the ingredients is loaded with nutrients, electrolytes, vitamins, and minerals.

In particular, these ingredients boost potassium levels, which is one of the most common mineral deficiencies today.

In fact, when you compare the mineral intakes of hunter-gatherers to modern humans, the discrepancy in potassium jumps off the page. According to Dr. Daniel Lieberman’s book, The Story of the Human Body, the average hunter-gatherer consumed 7,000 mg a day, while the recommended daily amount (RDA) here in the Unites States is only 580 mg per day.

This food is low in sodium and very low in saturated fat and cholesterol. It is also a good source of protein, thiamin, riboflavin, niacin, vitamin B6, calcium, iron, magnesium, phosphorus, potassium, and copper—and a very good source of dietary fiber, vitamin A, vitamin C, vitamin K, folate, and manganese.

Seventy-two phytochemical compounds have been isolated in green beans. In one study, green beans boosted energy and fought fatigue in exercising mice—confirming the theory that string beans made an effective energy sports drink.

This food is low in saturated fat and sodium and very low in cholesterol. It is also a good source of protein, vitamin A, thiamin, niacin, phosphorus, copper, and a very good source of dietary fiber, vitamin C, vitamin K, riboflavin, vitamin B6, folate, magnesium, potassium, and manganese.

This food is low in saturated fat and very low in cholesterol. It is also a good source of thiamin, riboflavin, iron, magnesium, phosphorus, and a very good source of dietary fiber, vitamin A, vitamin C, vitamin K, vitamin B6, folate, calcium, potassium, and manganese.

Known as one the best alkalizers, celery or Apium graveolens extract significantly protects the gastric mucosa and suppresses the basal gastric secretion in rats, possibly through its antioxidant potential.

It is clear that celery with different compounds and diverse concentration can have varied healing effects, most likely due to antioxidant properties.

More than just a decorative garnish, wreaths of parsley (Petroselinum sativum) were worn by Greek athletes—including Hercules, according to legend—to celebrate victories. Today, we know that parsley offers great protection to the body against environmental chemicals and toxins.

Based on some of the new discoveries, parsley, as a garnish, cooked into your soups or blended into your smoothies, may be better served as a regular staple throughout your spring, summer, and fall diets.

Parsley (Petroselinum crispum, neapolitanum, and tuberosum) is loaded with flavonoids (which make it a great source of vitamin C) and volatile oils such as myristicin, apiol, and eugenol that offer powerful toxin and chemical-protective properties. Myristicin activates the liver’s most powerful detoxification enzyme, called glutathione peroxidase, which is known to rid the body of toxins, chemicals, environmental pollutants, and more.

The volatile oils in parsley were also shown to neutralize certain types of benzopyrenes, which are toxic chemicals found in cigarette smoke and charcoal-grilled foods.

Eugenol is a potent volatile oil found in parsley, and also one of the primary health-promoting constituents of tulsi holy basil.

Eugenol naturally fends off undesirable foreign bacteria in the gut, such as candida. The volatile oils in parsley can help to balance blood sugar, boost immunity and mental function, and protect against chemical damage in the liver, cells, gut, and more.

Parsley is rich in flavonoids that protect the cells throughout the body against toxic chemicals and oxidation. One such flavonoid is called luteolin, which supports healthy carbohydrate metabolism, blood sugar, and provides enhanced antioxidant properties. All of these qualities make parsley a powerful environmental toxin-protective for the body!

Get Your Greens & a Whole Lot More.