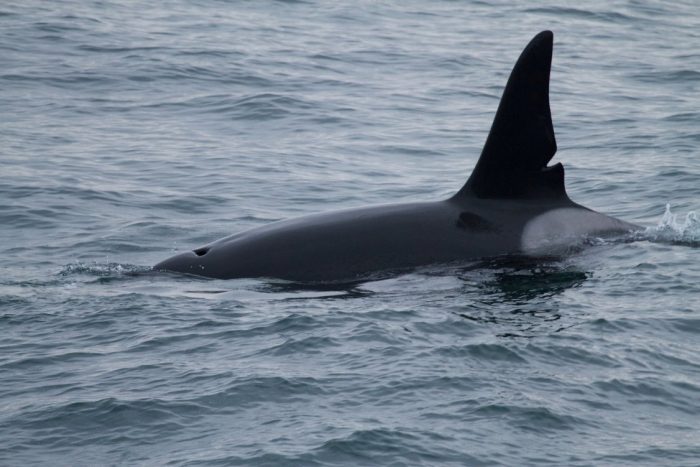 Off the Victoria coast in British Columbia, heartbreaking scenes have been unfolding as grieving orca mother Tahlequah continues to carry her dead calf around with her since it died on Tuesday, July 24th.

There were some initially hopeful moments when mother and baby were seen swimming together, but tragically, the baby died soon after being born, and the distraught mom has been supporting her newborn on her forehead for six days, refusing to let it go.

Occasionally, the orca mother drops her baby and as it sinks, she dives into the ocean to retrieve it.

Orcas, recognised by their distinctive black and white color, are critically endangered species, and are known for their strong family bonds. They maintain close ties with all family members, and their offspring remain closely connected to their mothers for life.

According to reports, the rest of the grieving mother’s pod knew that she was pregnant and are aware that she is in a deep state of grief—they use sonar vibrations to communicate with one another. Her entire family remains close, swimming in slow circles, appearing to perform a grieving ritual.

“At sunset, a group of 5-6 females gathered at the mouth of the cove in a close, tight-knit circle, staying at the surface in a harmonious circular motion for nearly 2 hours. As the light dimmed, I was able to watch them continue what seemed to be a ritual or ceremony. They stayed directly centered in the moonbeam, even as it moved. The lighting was too dim to see if the baby was still being kept afloat. It was both sad and special to witness this behavior. My heart goes out to J35 (the orca mother) and her beautiful baby; bless it’s soul.”

A study carried out in June this year found that over 90 percent of orcas are attentive to their dead, with three quarters of them being mothers grieving their offspring.

The Center for Whale Research, which monitors whale populations for North America, states that in the last two decades, 75 percent of southern resident newborn orcas have not survived, and in the past three years, no pregnancies have been successful.

Dwindling stock of Chinook salmon, the main food source of orcas, is believed to be the cause of the failed pregnancies and deaths of newborns, as the mothers are not able to adequately nourish themselves to provide enough nutrition and milk.

The total number of southern resident orcas is now at its lowest count since the early 1980s, at just 75, after a 23-year-old orca known as Crewser died in June of this year. These orcas are frequently seen swimming in the protected inshore waters of the Salish Sea, and are made up of three separate pods that are all extended family members. The families are then divided into sub-pods which are usually centered around the grandmother or great-grandmother.

Despite the distance these orcas travel in the wild (approximately 140 miles per day), and the close family connection and advanced social interaction they have with one another, one orca, known as Lolita, is still being held in captivity at a marine park.

She is approximately 50 years old and has spent the last 47 years with no mental or physical stimulation in a tank only four times her body length. Her former tank mate, Hugo, completed suicide 38 years ago by repeatedly smashing his head into the tank, and since then, Lolita has had no orca company.

Lolita is the last surviving orca out of 45 who were captured and delivered to marine parks between 1965 to 1975, and many others were killed or traumatised in the process. While orcas can live to over 100 years old, the average life expectancy is 30 to 60 years; however, orcas who live at Seaworld have an average life span of only 14 years.

Animal advocates went to court in January 2018 to attempt to free Lolita, and despite 13 objections raised regarding her treatment and an expansive account of illegal harm and harassment, the appeals court ruled against her release. In 2016, Seaworld made the decision to end its orca breeding program and phase out these entertainment shows, but is still determined to hold Lolita captive rather than allow her to be released into a natural environment.

As orcas are listed as an endangered species, we hope that every effort will be made to support their survival before it is too late. Not only is their health compromised from lack of food due to extensive salmon fishing in the area, it is also believed that noise and lethal pollution from open pen salmon farms are closely linked to their premature deaths.

Ken Balcomb, who monitors orcas for The Center for Whale Research, declared that both the United States and Canada must do more to restore wild salmon before the pods decline to such low numbers that it’s too late to save the species.

Balcomb also explained that when orcas do not get enough food, they burn off some of their blubber to provide energy, and although their blubber is not harmful to them, it can cause serious harm to their offspring who absorb the contamination through their mother’s milk. Balcomb explains, “Their (orca’s) own blubber is not actually toxic to them, and when metabolized and circulated in the blood stream it causes reproductive malfunction, immune-suppression and nervous system impairment.”

The plight of the orcas was also highlighted in 2016 after a nursing mother died 10 months after childbirth, following dramatic weight loss. Tragically, her 10-month-old calf is believed to have died soon after, despite his doting sister desperately trying to feed him, while also attempting to find enough food to feed her mother before her death.

Our Orcas are Failing to Thrive. Not Your Average Granny: 103-Year-Old Orca still Shaking Her Tail-fin! Envisioning a Happy Ending for Lolita.