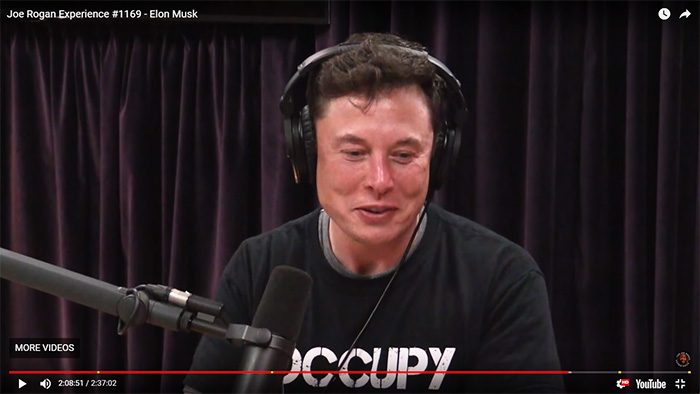 And this morning I woke up to the news that Tesla’s stock dipped more than six percent because of this event.

This news doesn’t necessarily surprise or worry me, but it does highlight what we’re paying attention to from their 2.5-hour-long conversation.

Joe’s podcast and Elon’s single drag from Joe’s spliff (a completely legal behavior in California where the podcast is recorded), has become the primary focus of the entire discussion, along with the ensuing stock market chaos.

What’s missing from the dialogue are some of the gems from the podcast.

But early this week, Elon spilled the beans and posted on his Twitter that he was going live on the Joe Rogan’s Experience Thursday night. Let me tell you, I waited with baited breath for this interview. Joe has a lot of heavy hitters on his podcast, from Neil Degrasse Tyson, to Bill Burr, to Russell Brand—and I’ve come to see him as a leader for our generation. A leader who regards education, common sense, health, and happiness as barometers for functional living.

After listening to the podcast twice, I’ve pulled out five major takeaways from their conversation that gave me serious pause for thought. Now, of course, I won’t be able to do justice to all of these points. The link to the full podcast is included at the end of the post for precisely this reason.

If anything, I hope these five takeaways spark a blip of interest in you, introduce you to a new perspective, or even give you a rabbit hole of positive influence to dive into:

Joe got into the AI topic quite early in the conversation, probably because of how many videos exist on the internet with Elon talking about it. According to Elon, the on-ramp to serious AI will be humans using it against each other, as it will be very tempting to use AI as a weapon.

But the future of AI doesn’t need to be grim.

The best case scenario is an AI that is so sophisticated that it doesn’t separate from our brain—one able to read, send, and receive information at the same rate that our brain functions, leading to vastly improved brain power for those who use AI.

AI is also not something exotic—it’s something we’re a part of right now as one large cybernetic collective, like leaves on a tree or nodes on a network. We are currently collectively programming intelligence into platforms like social media, the internet, and other machines.

2. The Nature of Reality

If we are moving toward creating a virtual reality that is indistinguishable from physical reality, why do we think that we aren’t already living in a simulated reality now?

So, if what we are living in is already a simulation, then we must be experiencing a distillation of whatever is interesting from outside the simulation.

Social media provides a platform for us to claim we are happier than we really are, and this can be a big problem. We often see ourselves relative to others, which leaves us feeling sad when we perceive others are always looking and feeling better than us. And because we see ourselves relative to others, we are constantly rebaselining our expectations for what life should be based on the images we see on social media—which in turn creates a problem as those images themselves don’t represent how people are actually living their lives.

What’s more, we have a bandwidth issue where our input and output is slow, especially our output. What does this mean? In the days of computers (remember those?), we used to communicate with all 10 of our fingers, but now we are primarily using only our thumbs. This creates a bottleneck where the data from our brains cannot move through two fingers quickly enough. Our thumbs are not equipped to sufficiently express our experience at the pace at which it’s occurring, which can leave us frustrated and pent up.

When Elon mentioned the issue with slow outputs, I immediately recognized myself in his words, and was able to recall countless times where typing something on my phone created an anxiety of not being able to adequately express myself.

These two things in combination—showing life as being more glamorous than it is, and being unable to communicate effectively using only our thumbs—has a lot of us feeling generally sad when we use these platforms, which is why Elon deleted all of his social apps except Twitter, which he uses to communicate with his audience.

It is important for us to accelerate our transition to sustainable energy. The goal is clear now that we need to stop taking carbon from underground and putting it into the atmosphere (and oceans).

The scientific consensus is that there is a serious climate risk that we’re facing, which makes our current use of fossil fuels an insane experiment. With our oil-burning devices, we are inherently subsiding the consumption of carbon going into the atmosphere that we will end up paying for later.

Elon is not necessarily concerned about today’s levels of CO2, he’s more concerned about the speed at which it’s taking to build momentum towards sustainable energy. For example, there are 2.5 billion cars and trucks on the market worldwide, and the entire world is producing 100 million cars every year. If we were to change 100% of the world’s production of cars to electric, it would take 25 years to change the entire transport base.

For consumers, the call to action is in decentralizing our energy production by utilizing solar power and batteries—to sufficiently power a home 24 hours a day. In addition to creating solar roof tiles, Elon also alluded to the possibility of creating air conditioning systems, which are one of the major energy users in a house (which to me smells like the start of smart homes and has me very excited for his next ideas).

5. The Purpose of Life According to Elon

Joe’s comments during the podcast can be summed up in the following ways:

Don’t assume people are mean until they show you that they’re actually mean.

We are very good at demonizing people and we’re usually wrong.

Try to do useful things.

Try to make the future exciting and maximize the probability that the future is good.

Find something to look forward to when you wake up in the morning.

Love is the answer.

It wouldn’t hurt to have more love in the world.

From my point of view, these are much more important topics to spend our time discussing than a puff from the magic dragon.

This is part of how we are educating ourselves to be responsible, functional and ultimately happier in our lives.

It would be shame to let the magnitude of this content be diminished into a flashy story about ganga, when their entire conversation centered around how to make the future an exciting place to be and how best to live life now.