The Dalai Lama Owes an Apology. 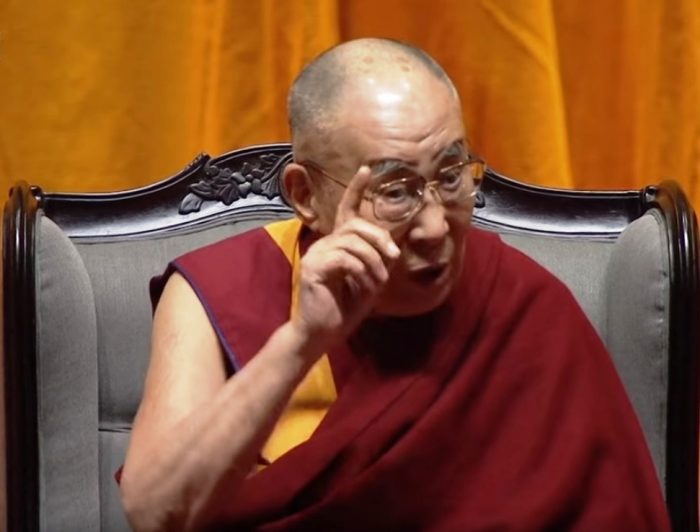 A mob of 8,000 people, led by hundreds of identified Nazis, recently rampaged through a German town chasing down people with dark skin.

And an extreme right wing party with white nationalist roots just won enough seats to become a deal maker in the next Swedish government.

But the Dalai Lama nevertheless saw fit to add fuel to fascist fires in a talk in Sweden, where he declared “Europe belongs to Europeans.”

At least, that is what white nationalists took away from the talk.

The Dalai Lama also noted that Europe was “morally responsible” for helping “a refugee really facing danger against their life,” and that Europeans should “receive them, help them, educate them.” But he nevertheless stressed that they should ultimately return home and “develop their own country.” And it was not the first time he has said such things.

A couple of years ago, he noted that “Germany cannot become an Arab country.” But Germany is not 30 percent, not 13 percent, and not even 3 percent Arab. Rather, its Arab population is 1.3 percent, roughly equivalent to its percentage of Jews just before Germans killed them off. And yet, the Dalai Lama seemed to be saying that Arabs might dilute Germany’s cultural distinctiveness.

Most of the Arabs living in Germany are Syrian, and most seem to fear for their lives if they return home. The Assad regime has targeted people associated with the revolution, and anyone who has fled the country is in danger of being associated with it. It is much the same with Afghans fleeing the Taliban, Somalis fleeing famine, and Eritreans fleeing perhaps the most totalitarian state on Earth.

Refugees are by definition in danger of staying in their home countries, which is precisely why refusing to take them in is so cruel. So, saying Europeans need to protect refugees if they are actually “facing danger against their life” is meaningless if this is precisely what makes them refugees. And saying “Germany cannot be Arab,” is senseless if Arabs make up just over one percent of the population.

It echoes the hyperbole of people who would say America cannot become a transgender nation, as if anything of the sort were possible.

Hence, it was of little surprise that right wing news sites like Breitbart immediately picked up and used his statement to justify a vision of racial and ethnic purity in stark contrast to the Dalai Lama’s own global ethic of compassion.

The Dalai Lama is himself a refugee who cannot return home without fearing for his life, but he doubled down when asked to clarify his remarks the next day. Perhaps he did not recognize the way his words were being used, or else he simply misspoke. But it is unlikely, given that he is the head of state to a nation in exile and a perceptive thinker who chooses his words carefully.

A more likely explanation is that he was simply projecting his own personal sense of duty to Tibet onto refugees thrown into entirely different circumstances. But the Dalai Lama’s own commitments as someone born to lead his country are most unusual. Whatever the reasons, his comments ignored the realities most refugees face.

Refugees are forced to live in two worlds: the one they have left behind, and the one into which they must assimilate.

They must learn the language and norms of another culture and educate themselves to live in their adoptive countries, for not knowing what the future holds, they must make the most of the lives they are given.

But in so doing, they will build careers, businesses, families, and communities, thereby acquiring new commitments and superseding those of their pasts, which increasingly fade in memory. It simply makes no sense to tell a Syrian man, whose new wife is Turkish, whose children are German, and whose business is located in Berlin, that after living in his adoptive country for 10 years, he must now pack up to rebuild a country no longer recognizable as his own.

Given that he has been leading his people for over half a century, it is quite likely the Dalai Lama simply formed his views in another era, where nativist sentiment was not so strong and refugees did not face such threats as today. But refugees have always been forced to live in two worlds, and their commitments to their home countries have always been complex. And the Muslim refugees to which his comments were addressed are now everywhere under threat.

The Islamophobia he just helped stoke in Europe is now being felt across the world.

China has placed close to a million Muslims of the vast Xinjiang province into prison camps, where they are being indoctrinated. India has banded behind a Hindu nationalist president, who as governor of Gujarat, oversaw a pogrom that killed 2,000 Muslims and pushed another 150,000 into refugee camps. And Central Europe has elected a spate of Islamophobic parties running on a platform of keeping Muslims out.

But Buddhists have often engaged in the strongest persecutions of Muslims, with Buddhist monks leading a genocidal campaign of ethnic cleansing that has pushed close to a million Muslim Rohingya from Burma. Buddhist nationalists are actively persecuting minorities in Thailand and Sri Lanka. And Buddhist atheists are often leading the charge against Islam in the United States, where they tend to speak of a cartoonish fantasy of the religion, gleaned from headlines.

Muslims are astonishingly successful in the United States, where they enjoy some of the lowest crimes rates and highest rates of graduate education among any demographic.

Meanwhile, Muslims in Europe are often more dedicated to European values like democracy and human rights than their right wing accusers; and the warmth and hospitality of Arab cultures is arguably more compatible with Northern European civility than either the fast-talking expressiveness of Southern Europeans or the conservative authoritarianism of many Eastern Europeans.

Europe includes three Muslim majority states: Albania, Kosovo, and Bosnia. And a significant portion of predominantly Muslim Turkey is located in Europe as well. Most of the Muslims in Germany, Britain, and France came to their adoptive countries when their labor was needed, and a substantial portion hail from former colonial territories, which were once considered integral to these European empires, which would later be reduced to rump states.

The idea of Europe has never been constant, but in recent years, it has more often than not been associated with a multicultural project of transnationalism, which is far more suited to refugees fleeing persecution than white nationalists voting for authoritarian leaders.

Like all identities, Europeanness is a mental construction. There is no essence to it; rather, it is what we make it. And the more expansive our idea of it, the more inclusive it can be of the people actually living in it.

The Dalai Lama should know better than anyone that identity is a construction and that ideas like that of Europe lack essences. He owes an apology to refugees for the harm his statements have caused and a deeper explanation more in accord with his own highest values.

“Pre-War Syria was absolutely stunning.” (imgur.com) 15 Musings on Love, Compassion & Peace from the Dalai Lama. Fascism is Back in Europe, and Muslims are the new Jews.
See relevant Elephant Video