Fascism is Back in Europe, and Muslims are the new Jews. 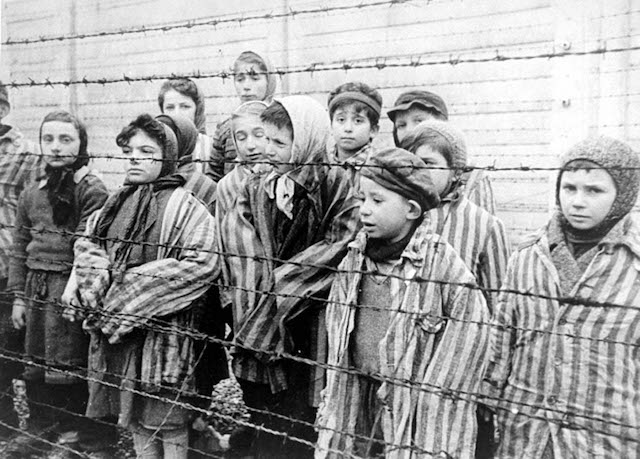 A conservative populist with far-right support was just elected president in Adolf Hitler’s birthplace of Austria.

He will join a block of illiberal, authoritarian populists from Poland and Hungary, who are themselves likely to be joined by a newly elected billionaire from the Czech Republic, who is often compared to Donald Trump.

They are all anti-immigrant and arguably Islamophobic. Their commitments to democracy are tenuous. The European Union will somehow have to accommodate their views. But the last time Europeans started electing rightwing populists, the continent was engulfed in war and the minority at issue was largely killed off.

Muslims have come to occupy much of the same European niche previously occupied by the Jews. Europeans worry that they are taking over, that they cannot fit in, that they are the agents of cultural decay, and that they will remain a perpetual enemy. It is eerily similar to their view of the Jews—just before six million were murdered in the Holocaust.

The author and therapist Arnold Mindell suggests groups seek out individuals to take on “ghost roles,” which continually arise whatever the values and membership of the group. Depending on their unconscious needs, the group might generate enforcers, provocateurs, scapegoats, or whatnot, and it happens in small groups and large cultures alike.

Europe is mostly free of the Jews now, but the cultures that expelled them remain. While most countries in Europe are now more globalized and multicultural, they still struggle to assimilate minorities. They still possess much of the same national pride, the same attitudes of cultural superiority, and the same political rallying points. And from the Czech Republic to France, rightwing populists are organizing around the theme of keeping Muslims out.

European cultures tend to be tight-knit and highly democratic. They possess a high sense of belonging, which makes it easier to maintain generous social programs. But this means immigrants pose a costly threat not only to a right that fears their otherness, but also to a left that fears for its social programs. It is a deadly concoction which can fast become explosive.

But much of the challenge lies in a cultural sense of superiority. While it is common to hear American liberals and leftists bemoan their historical memories of genocide and slavery, French and German travelers to America typically forget their more recent and brutal perpetration of genocide and imperialism when judging Americans.   For the past millennium, European societies have had few minorities that needed to be accommodated, except for the Jews and Roma. But as their nations democratized and became more unified, all too many opted to get rid of the alien others.

Jews were just one percent of Germany before the Holocaust, and Muslims are just about two percent of the European population today. Their numbers are minuscule, but the racism against smaller minorities tends to be less about assimilation and more about their sense of difference.

The hatred and fear of Muslims is driven largely by ISIS terrorist attacks. At first glance, this would appear to make Islamophobia different from anti-Semitism. But the Nazis were also animated by fears for the communist movements that were often led by Jews that threatened to undermine life as they knew it.

The hatred and fear of Muslims is also driven by the refugee crisis, spurred by conflict and state failure across the Middle East and Africa. And while this might also seem unique, it parallels the modernization process that drove Jews from the ghettos where they had been confined for centuries. Suddenly, a long-hidden minority came out of the woodwork and made itself felt.

People tend to retreat into smaller worlds in times of great change and to close themselves off from “the other.” The response is all the more pronounced when the greater part of the changes lie in the intermixing of peoples. Vast economic disruptions are then blamed on a scapegoat and collective fantasies of revenge used to mobilize the masses. The end result is fascism, and fascists do not seem to care which minorities they target.

Islam and Judaism are both kissing cousins to Christianity. While Christianity reveres the founding figures of Judaism, Islam venerates both Jewish and Christian prophets. Adam and Moses, Noah and Jacob, each play a role in all three faiths, as does the same God of Abraham.  This deep historical entanglement highlights their parallels and the significance of the Holocaust.

The Holocaust represented to many a fundamental rupture that ended the innocence of humanity. It was said that God had failed humanity and nothing would be the same again. Of course, genocide had been happening for ages and it did not stop. And yet, if the Holocaust represented so great a rupture, Europe might find redemption in the unconditional support for a Jewish state. The Jews had been wiped clean from Europe, but they shared a millennium-old European dream of reconquering Jerusalem.

However, the Jews’ triumphant return to Israel culminated in the ethnic cleansing of roughly 700,000 Palestinians, mirroring their own displacement by the Romans 2,000 years earlier. It was a process that transformed them from victim to perpetrator in a matter of months. The wandering Jews had finally found a home but in the process transformed the Palestinians into the homeless new Jews.   It was the first of countless displacements across a New Middle East, which would culminate in the backlash of secular dictators against the Arab Spring and the implosion of Syria. Now refugees are flooding into Europe, and Europe is reacting much as it did to the Jews.

But the Jews are now powerful and their massive lobbies are fomenting a hatred for everything Islamic, while goading leaders to engage in a war of civilizations so vague as to virtually guarantee its endless perpetuation. Meanwhile, the Germans and French are willing to forgive the new state of Israel seemingly every injustice in an effort to expunge a guilt of which they all too seldom speak.

And somehow, amid the contingencies of history and the countless moral and strategic errors of Muslim authoritarians and Islamists alike, a role reversal so complete has occurred that not just the Palestinians, but Muslims of every race and ethnicity, have become the new Jews.   Now they wander from country to country in search of a home, carrying with them only their education and the will to persist. In America and Canada, they are emulating the Jews in their academic and professional paths to success, but in Europe they have become the new underclass.

The role reversal is astonishing, and while the roles themselves are simply products of the imagination, examining their transmutations over time can provide a lens through which Europeans might glimpse their cultural shadow and the dangers haunting their horizons.

Muslims and Jews have always been many things beside the religions into which they have been born. Scientists and street sweepers, fathers and friends, liberals and authoritarians: their values and commitments are as wide-ranging as the human experience itself, and the religions into which they have been born are often the least of their concerns.   But fascists want to reduce us all to the accidents of our birth, and in the process place everyone in straitjackets so confining as to threaten implosion. It is a sort of European suicide belt that appears ready to explode.

We would do well to remember, amid complaints of Christians streaming out of the Middle East, that the only European genocide since World War II was actually perpetrated against Muslims in Bosnia. Make no mistake, there is a specter haunting Europe; but it is a specter whose ghastly presence is as insubstantial as the thicket of prejudices upon which its presence rests. Like an ephemeral fear in an anxious meditation, name it for what it is and it might vanish as quickly as it appeared: fascism is back in Europe, and the Muslims are the new Jews.

If you liked this article, please check out my book, Convergence the Globalization of Mind, and follow me on Facebook to join the dialogue.