The Great Spiritual Cost of being an Artist. 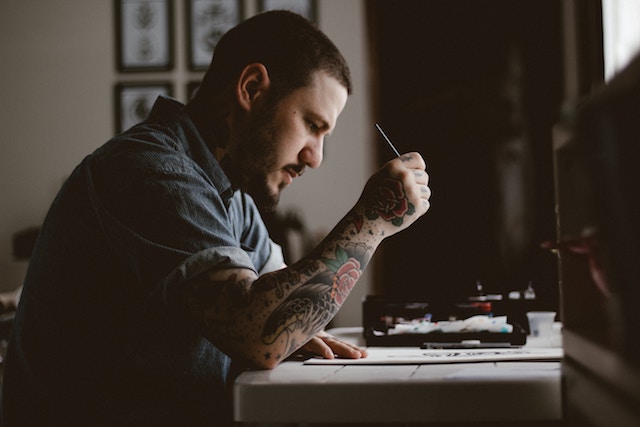 There are parts of myself that I keep hidden, buried from the outside world in some dormant chamber—to protect myself and those around me from facing the painful chaos that lies beneath the fragile demands of our culture.

I feel a need to obey the yawning conventions of society, to hold back the floodgates of my deepest emotions and heartfelt longings.

There’s nothing scarier than my own potential. At my core, I am untamed, deeply immature, and wildly expressive—and that terrifies me.

The floodgates can’t be kept back for long. The savage nature of human beings, developed from millions of years of incredibly messy and unbridled evolution, has to find expression in our daily lives. The dragon needs to breathe—and when it does we can only hope it doesn’t burn the whole village down.

This is the principle upon which all art is based: expressing the innate energy that constitutes our humanness, through a constructive and creative outlet, without setting the whole world on fire.

After having watched “Listen To Me Marlon” for the umpteenth time, this idea is beginning to calcify in my mind. The title is a documentary film about the life of Marlon Brando, colored by his most intimate thoughts in his own words. It is a fantastically thorough and awe-inspiring portrait of perhaps the most legendary screen actor of all time, but there is also a much deeper message on the essence of human life.

To me, the movie is really about the inadequacies we feel toward our identity, and the lengths we go to escape the utter banality of culture.

“When what you are is unwanted, then you look for an identity that will be acceptable.” ~ Marlon Brando, “Listen to me Marlon”

For Brando, the deep urgency to express something entirely real and true goes way back in time. It starts with his childhood, where he lived in-between beatings from his bar-fighting father and bailing his alcoholic mother out of jail. A childhood pierced with that much neglect and pain is either the recipe for a deadly convict or a supreme actor—and Brando took the road less travelled.

“Everything that you do—make it real as you can. Make it alive. Make it tangible. Find the truth of that moment.”

There was a need in him, and that need took him away from home to “The New School” in New York, where he studied under one of the most prestigious acting teacher ever to walk the earth, Stella Adler. Stella believed that “it is against the nature of human life to withdraw.” She developed a series of techniques that helped lay the foundation for modern day “method acting.” Stella took Marlon under her wing, letting him live at her home when he was in dire straights—telling him over again, “Don’t worry, boy. I see you. And the world will hear from you.”

She understood that there is more to people than meets the eye. We are deep as f*ck. The human heart is a vehicle of passion and depth—and we can’t contain the unquenchable thirst that it has for feeling and expression.

“A play has nothing to do with words. You do not act words, you act with your soul.” ~ Stella Adler

Acting is really about revealing something that’s deeply intimate and indispensable about yourself, through the medium of playing a character. The actor tells the absolute truth, yet in the form of a lie—a fake person, living a fake situation, in fake surroundings. This is a microcosm for modern living, where we all hope to express something honest and fundamental through the lie of culture, the lie of business, the lie of consumerism, the lie of marriage, so on. We must lie, but when there’s no longer a hint of truth in our lives, we degenerate into a hollow shell of a human being.

This was the catch-22 that lead Marlon Brando down a shadowy abyss in his life and career. He became impossible to work with, incessantly asking for rewritten scripts and locking himself in his trailer if he didn’t get what he wanted.

From the outside, it looked like another stuck-up movie star throwing his weight around Hollywood, but in my eyes this was a tremendously damaged person who could no longer tell fact from fiction.

When our job is to convey realness through the screen of something false, like a character in a movie, it’s easy to lose touch with our sense of reality. This is why actors are usually so f*cking crazy—because their job, at its core, is to lie—and how do you know when to stop? When do the lights go off, exactly? Where is the line between reality and illusion? This is a hard line to draw even when we aren’t pretending to be someone else for a living.

“If I had a scene to play and I have to be angry, it must be within you—trigger mechanisms that are spring loaded, that are filled with contempt about something. I remember my father hitting my mother. I am 14…” ~ Marlon Brando, “Listen to me Marlon”

We need some awareness of when the lie ends and where truth begins, and we experience this distinction in our daily lives all the time. We might be playing the role of Dad or Boss or Husband, and then something happens that makes us forget who we’re pretending to be and shift into another role. The fusion of these two worlds is the job of the artist, and it’s a hazardous job that comes at a great spiritual cost—we can lose our sense of reality.

“We develop the technique of acting, very, very early. Even from the time we’re a kid, where we’re throwing our oatmeal on the floor, just to get attention from our mothers. Acting is survival.”

Mr. Brando paid that cost in full, with the death of his daughter and the imprisonment of his son for manslaughter. At the sentencing hearing for Christian Brando, Marlon pleaded for leniency on his son’s sentence, citing his own absence from his son’s upbringing as the reason for his behavior—a noble declaration for a father to make.

In spite of Marlon’s genius, or maybe in part because of his genius, he lived a lonely life. Still, his work lives on, and the impression he left on our collective psyche is burnt into eternity. Marlon Brando was an artist, in the most quintessential sense of the word. He brought truth to the silver screen, paving the way for the future of film and its impact on our soul. He’s also a testament to the risk we take in blurring the line between truth and lie.

Both Stella Adler and her protégé Marlon Brando have given us a clue, which is to recognize the lies we tell and cut through them with the “unbearable lightness of our being.”

I see Marlon’s story as both a tragedy and a triumph. He was mirror, reflecting back to us what we are in the depths of our being—for better and for worse.

“A good con man can fool anybody. And the first person that you fool, as a con man, is yourself.”

The Introvert Myth: How to Deal with being an Empath.