We are who we Tell Ourselves we Are. 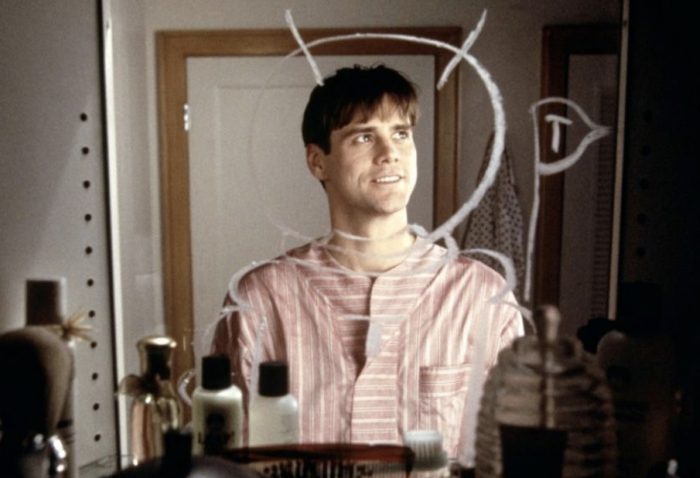 I have this idea that when people read my bio blurb at the bottom of my blogs, they assume I am a truck driving “good ol’ boy” who, in lieu of buying a Corvette, chooses to manifest his midlife crisis at his keyboard every morning.

Don’t get it twisted though. The first day I showed up at commercial truck driving school, at the tender age of 42, I was petrified.

As a matter of fact, whenever it was time to break up the class and go out in the trucks to actually learn how to drive them, I’d get an awful acidy stomach ache. You know, like the one you get when you are about to get into a fistfight with someone quite a bit larger than yourself. And in this case, larger by about 80 feet and 70 tons.

There were other guys in my class, of course, and no one knew how to drive a rig. But I kind of felt like they aspired to it so much more than me. It was as if they couldn’t wait to get out there and play with the big toy. And while it is never good for the people around you to harp on too much about how unique they are, I was different.

My background made me feel a lot more at home on a stage with a velvet paisley shirt and a guitar than a Carhartt jacket and a power tool.

There are times, though, when necessity becomes so much more than just the mother of invention. Sometimes, necessity also becomes the father of “Why are you making me do this?”

And there was a necessity. My partner was six months pregnant with our first child and I did not know how to do anything to make more than $400 per week.

The school lasted six weeks and by the time it was finished I knew everything there was to know about everything I didn’t know about driving a truck. I climbed into the seat with the tester from the Department of Motor Vehicles and proceeded to do almost everything wrong. She asked me to make a right and pull over. “Here it comes,” I thought.

“You obviously don’t know anything about driving a truck, but I am going to make you a deal,” she began. She went on to tell me about a certain trucking company that would give me a mentor for six weeks who would live with me in the truck and teach me everything there is to know. If I promised her to go there for a job, she said she would go out on a very long limb and give me my license.

You’d think this woman was completely irresponsible, but I don’t believe that was the case. There was one guy in my class that used to frustrate the teachers every day because he had this nervous habit of talking. Non-stop. All the time. He did not pass.

I’ve always suspected that women intuit things quite a bit better than men and this incident practically proved it to me.

We knew each other for a total of 15 minutes, but in that time it was made clear to me through observation that she saw something in me she did not see in my motormouth classmate. For the most part, in that one space of time, she was able to install a different story in me than the one I had when I got there. The one I had for decades before I got there.

The rest of the story is kind of boring. I went on to become a truck driver, I began earning about three times the income I was earning before, and me and my partner went on to have a second child—but, I hesitate to stray too far from my original point.

In 1963, Bob Rosenthal, a research scientist at Harvard, decided to try something interesting. He went around the lab where he had housed experimental rats and randomly hung signs on the cages. “This one is dumb,” on some cages and, “This one is smart,” on others. (Actually, the signs said “maze bright” or “maze dull”—but that’s kind of boring.)

When the students performed studies with the smart rats, they did all sorts of great smart rat things. And wouldn’t you know it? The dumb rats kept doing dumb things. Of course, as I stated, these were arbitrarily placed signs on the cages. All the rats were neurologically similar.

Rosenthal was so impressed with the lab results that he decided to try the same thing at an elementary school just south of San Francisco later that year. Once again, the results were conclusive.

A random selection of students were said to be faster “academic bloomers” and the teachers were informed of this. The teachers were also told about other students who were slower. Keep in mind, none of this information was accurate— that is, until the school year was over. The ones who were randomly labeled slower did, in fact, perform worse on an IQ test when the experiment concluded.

I probably don’t need to continually bang you over the head with where I am going to with all of this. You are smart enough to see the correlation. Or are you smart enough because I am telling you that you are? We’ll never really know for sure.

While it is true that we can change the outcomes of animals and children by our expectations, would it not be also true that the expectations we have of ourselves will determine what we are able to do?