4 Tips for Being Loud in a Society that Asks Us to be Quiet. 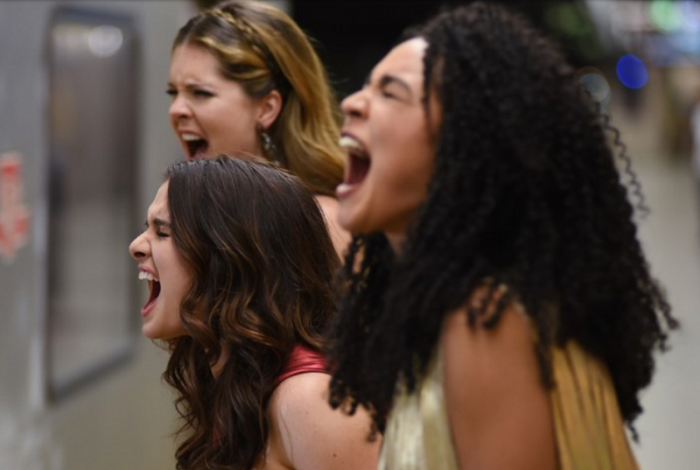 I sat in my friend’s car one evening, screaming the kind of screams that come not from our throats, but from our cores.

The kind of screams that vibrate our chest, purple our cheeks, and stretch our mouths so wide that it hurts.

We weren’t fighting. We were sharing a meaningful moment of intentional vocal release.

Often, when we describe desired traits in a relationship, we say we want someone we can comfortably be silent with, and while this is certainly valuable, there is a definite treasure in finding someone with whom we can also be our loudest—an oddly untapped sensual connection between beings.

We have screamed to music. We have screamed just to scream—and yet, we don’t just scream. We make noises and strange voices. And we don’t care where we are or what others may think of our quirky bonding. An onlooker once uttered, “That’s normal,” while stepping opposite our direction. We howled in laughter.

If vocalization has the power to repulse, or to damage possible connections, the inverse is that it has the power to bond and to heal. My guess is that we all have a few things we could scream about right now.

In my massage training years ago, we were briefly introduced to the healing art of sounding. We closed our eyes and were told to observe where in our body we “felt sounds” as different instruments were struck or played. Later, we were encouraged to play with releasing whatever sound our body felt like it needed to let go—high-pitched sigh or super-low groan.

We enter this world screaming, and for a too-short period of time it is acceptable to be loud and play with these amazing lungs of ours without associating our vocalization with a discipline such as voice lessons, theater, or speech. Too soon, we learn silence in so many variations—the types found in the library, or in the creeping fear of rejection during a hurtful moment with a significant other.

Primal therapy, a controversial type of psychological treatment, was founded by Dr. Arthur Janov in the 1960s. The method aimed to regress adults back to traumatic childhood experiences to relive them. Often, sessions resulted in a murderous scream symbolizing the overwhelming feeling of traumatic release. With devotees such as John Lennon and Yoko Ono, it’s safe to say primal therapy is a bit quirky, but perhaps the concept has some merit.

During finals week back in college, residence halls hosted an event called Primal Scream, named after the therapy. Tradition used to be that students would come grab a snack and scream to release any tension they were feeling from being holed up in their dorms, poring over materials. Over time, the word was that our college Primal Scream event changed because students in the surrounding areas became disturbed or distracted by the ruckus. The event, somewhere along the line, became a simple snack session.

When I worked the event one year, I decided to bring back the scream. I gave a brief introduction, and people’s zombie-like faces lit up. Often, the offer of: “I’ll join you” helps coax others into participation, as long as the activity is acceptable.

But we can also use our indoor voices. Sound healing, also referred to as sounding or toning in its various forms, is an ancient healing practice that has been around for centuries, and across various cultures. It can include the use of music, instruments, or voice to elicit mindfulness, awareness, or to ease our mental and physical pains. Today, the Memorial Sloan Kettering Cancer Center in New York offers music therapy courses to those affected by the disease.

The benefits of sound in healing have been medically acknowledged as a complementary healing modality when paired with traditional treatment, though experts are clear to point out the distinction between the terms cure and heal: the former indicates a fix, while the latter, a union of mind and body.

For myself, sound healing might mean driving down a bumpy road and holding its vibration in my chest and as long as my breath allows. It might mean bashfully participating in a collective “Om” at the end of a just-right yoga class, or screaming playfully with a friend.

Here are four fun, quick, and easy ways to release, heal, and connect with self and others through sounding out our internal tensions:

I have a hard time with chanting. Chanting my own name, nonetheless, felt so hokey and vain when I first heard of it. No way am I ever going to try that.

So, I got in the bath, dunked my ears below the water’s surface, and took a breath so deep that I felt my body rise in the water. Maaareeesaaah. I felt my body sink to the bottom of the tub.

I’d never pondered my connection with my name, or how nice it feels to hear it voiced and pronounced correctly. Out of the bathwater, I felt respected and honored, and through that balance felt better able to connect with others. I didn’t need external reverence if I had my own.

2. Howl with a Honey

Oh, the things I’ve nonverbally hashed out in bed! By screaming and groaning and letting it all hang out with a partner vocally, I release more than the sounds behind my tensions—I also release tons of stress-relieving hormones. This one’s a double whammy and an absolute favorite. Solo? Fool the neighbors.

This one’s a form of practicing anger with intention. I have a pretty broad emotional vocabulary, so I seldom feel the blanket that is anger pulled up over my body. When I’m suffocating in a rare moment that I’m beneath its cover and can’t seem to escape, I’ll hop in the car and pick a song I know gets me all in my feelings.

I’ll belt and deplete all the air in my lungs doing so—the longer the notes the better. Or, I’ll turn a song into “screamo.” No particular tone, just people looking at me strangely from the seats of neighboring vehicles as I shout Alanis Morissette’s “You Oughta Know” incoherently.

4. Kid with the Kids

When I was a caretaker for a couple of different families of children, I frequently allowed myself to participate in their fun. If they were shouting, I’d shout back. If they copied me, I’d turn the table and start to match their vocal tone. I’d read to them, varying voices for each character, or run around the house making as many different superhero sound effects as I could. It may be difficult to describe the sound of Spiderman’s web dispensing and latching on to a brick wall, but try it.

When we tap into our voices—these intimate parts of ourselves that we squelch because society has conditioned us to do so—we tap into power. Sounding in solitude enables us to initiate self-healing and connection to some of the deepest parts of our souls. When practiced in the company of others, we share this depth without having to communicate anything with words. They become part of our healing, and through that, we tighten our bonds.

We can tap into this power, wherever we are—in the street, in the car, in our office cubicle.