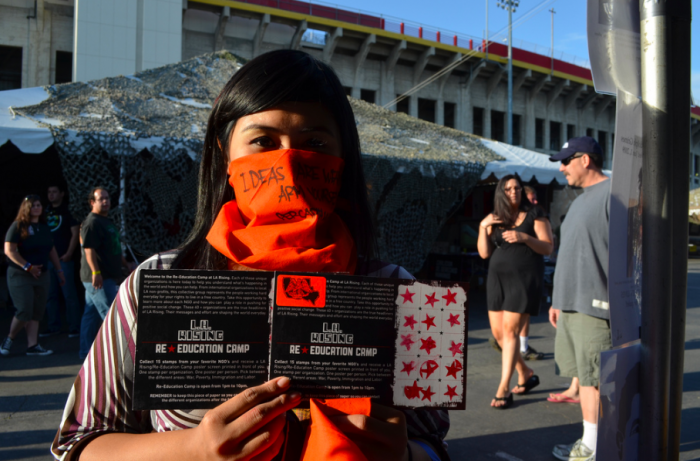 Late last spring, thousands of fascists from the English Defense League, which the British Home Office lists as a major terrorist threat, marched through London, attacking and injuring police in defense of a leader who was recently invited by Republicans to speak before Congress.

They are an anti-Muslim hate group, and members often give the Nazi salute. However, their former leader, for whom they were demonstrating, is wildly popular in Israel where he recently toured, posing for a photo on an Israeli Defense Forces tank, with a gun in his hands.

Racists from across the world have begun forming all sorts of bizarre connections.

And as a pioneer in the use of the Islamophobic propaganda, which fascists typically use to mobilize the masses; and as the leading human rights abuser among developed democracies, Israel often finds itself at the heart of these alliances. But fascist rage has traditionally been directed at Jews, many of whom are quite uncomfortable with the strange new bedfellows whom their more conservative brethren have befriended.

Consider Viktor Orban of Hungary. He is good friends with the Prime Minister of Israel, with which he has brought his country closer. But he just ran an intensely anti-Semitic campaign focused on George Soros opening borders to Muslim refugees. It is much the same with Poland, which is Israel’s closest ally in Europe.

After passing a law making it illegal to discuss their role in the Holocaust, many of Poland’s leaders praised 60,000 white nationalists who marched through their capital last year, chanting anti-Muslim and anti-Jewish slogans.

But perhaps the most stunning has been its relationship with the Trump administration. In spite of having built the world’s premier white nationalist publication, Trump’s former strategist Steve Bannon is an ardent supporter of Israel, who describes himself as a “Christian Zionist.” And conservative American Jews refuse to abandon Trump because of his support for Israel, in spite of his rhetoric having spurred the most deadly attack against Jews in American history.

But while Israel’s connections with neofascists may be alarming, they merely highlight the way shared hatred trumps shared identities in contemporary fascist movements.

And yet, the alliances among fascist fringe parties and small, racist states merely scratch the surface of a far more malignant threat. For almost every major state in the world today is led by an authoritarian with fascist tendencies, and most of them appear to share a striking affinity for one another.

Xi Jinping has placed close to a million Muslim Uyghurs in reeducation camps while setting himself up to rule for life in China. Vladimir Putin has built a cult of personality around his militant persona while destroying any hint of opposition in Russia. Narendra Modhi has encouraged the ethnic cleansing of Muslims in his home state while centralizing power and attacking civil society in India. Shinzo Abe is militarizing the most right wing government to take power in postwar Japan. Donald Trump is waging a war on truth and the free press in America. And Jair Bolsonaro vows to restore military rule and “cleanse” his political opponents from Brazil.

It is an astonishing reversal given that dozens of powerful democracies recently helped shape a largely peaceful and prosperous world order, which promoted democratization through an array of global institutions. But those institutions are now fast crumbling, along with the alliances lying at their foundation. And the world’s most fascist states are inching ever closer together, as smaller states increasingly elect right wing authoritarians with dubious commitments to democracy.

It begins with the mutual praise of leaders, like Trump’s warm congratulations to Jair Bolsonaro upon being elected head of state in Brazil, which came coupled with an invitation to visit Israel. It is reinforced through attacking democratic allies, like Justin Trudeau of Canada and Angela Merkel of Germany, and shutting them out of important discussions. And it ends in the formalization of profound changes in the geopolitical order, spurred by the advent of new alliances, built by autocrats with shared affinities.

Alliances between nations consist of a mysterious admixture of shared sentiments, historical ties, cultural similarities, and military and trade agreements. Hence, fascist states need only highlight their shared affections and cultural similarities to pull closer together. But they can also do so through ignoring older alliances and forging new institutional arrangements, as Trump has sought to do with Russia.

The danger is that we could soon find ourselves living under a fascist world order, which encourages autocracy through the same type of incentives that so recently supported human rights, democracy, and trade. Putin now stands at the center of this nexus, contributing to fascist parties across Europe; hacking every pivotal election that might weaken the alliance; and sponsoring invasions and coups against possible rivals.

And this time there is no anti-fascist alliance among powerful states to stop it.

It is time we wake up to the fact that fascism is a global movement and that the number of world leaders willing to challenge it are few and far between, because they are increasingly punished for doing so. Hence, if we wish to preserve our freedoms, we are going to have to fight for them ourselves, like the subjects of any autocracy, who must refuse to be assimilated, and mobilize to resist, if they are to live in freedom.

But this time we are going to have to organize across borders, just like the fascists are doing.

And we are going to have to form friendships across borders, which are nourishing and enriching, so we might band together in support when freedom is threatened in any one place.