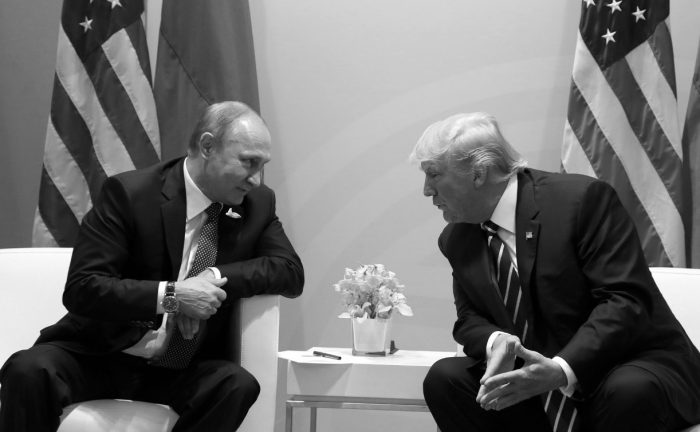 America is now waking up to Trump’s astonishing betrayal of its highest ideals, but the betrayal is deeper and more consequential than even calls for impeachment suggest.

President Trump has arguably committed treason through offering support to a rival foreign power, which helped him win the election.

And as commander in chief of the military, the same punishment for treason that might be meted out to any common foot soldier should arguably apply to him as well. Many find the language of treason extreme and unjustified—but the case for treason is more straightforward than the intricacies of the Mueller investigation suggest.

Trump stood before an audience early in the summer of his campaign and asked a rival foreign power to illegally hack his opponent’s emails. When all of the nation’s intelligence agencies agreed Russia had done so, and as news leaked out from allies like France, Germany, and the United Kingdom that they had done the same in their elections, he repeatedly denied Russian involvement in his election.

As the Senate Intelligence Committee confirmed the findings of the intelligence agencies, and as Twitter and Facebook confirmed Russian involvement in the election through their platforms, Trump’s denial persisted.

Meanwhile, Trump offered what arguably no American political leader, down to the municipal level, has suggested offering to Putin and the country he governs since he entered office a generation ago in 1999:

Trump praised him repeatedly, increasing his standing in the world.

He attempted to end sanctions, the promise of which buoyed Russian business interests across the world.

He tried to have Russia admitted back into the G8, just the mention of which strengthened Russian economic prospects.

He treated the greatest impediments to Russian imperialism as American enemies, repeatedly attacking the European Union and NATO, which protects Eastern Europe from Russian attack, thereby weakening their integrity and vitality.

And in the end, he took the word of his rival, known for lying and deceit, over that of his own government, while standing before a global audience.

Russian involvement in the election mattered because Trump may not have won without it, and Trump is arguably the greatest threat to American democratic institutions ever to appear in over 200 years. But whether or not it helped elect him, it was an infringement of American sovereignty. And it was an attack on the sacred right of every American citizen to appoint their political representatives at will, the removal of which would lead to countless everyday abuses of power.

Putin has been carrying out such cyber attacks throughout Europe, where he is funding countless right wing extremist parties, which want to break up the European Union. He has engaged in territorial land grabs in Georgia and Ukraine. He has carried out crushing aerial assaults in Chechnya and Syria that many have labelled genocidal. And he has destroyed the last remaining vestiges of his country’s democratic institutions.

Hence, his attack on American electoral institutions was not a one off but part of a pattern of abuses, which go against America’s own highest ideals.

The Oxford English Dictionary defines treason as “the crime of betraying one’s country, especially by attempting to kill or overthrow the sovereign or government.” The Constitution defines it, among other things, as “adhering to their enemies, giving them aid or comfort.”

Whether or not Trump has committed treason is certainly debatable, and the outcome of that debate would be largely dependent upon precedents of treason in American history. But the United States Code states that the punishment for treason shall be death or imprisonment for a term of no less than five years, and such a punishment goes far further than even Trump’s greatest political rivals are now recommending.

There are many reasons our nation has failed to have an honest discussion about the severity of Trump’s betrayal.

Part of the reason lies in its unprecedented nature. No leader of a major democratic state, let alone America, has done such a thing in the modern era. Americans have also set an extremely high bar for prosecuting public officials and impeaching presidents, treating the removal of a president, which is quite ordinary for most countries, as a sort of major national trauma. Liberals have also been seeking to build a water tight case through the Mueller investigation, and this has meant holding back on some of the strongest calls.

But the biggest reason may be the most frightening:

We have normalized Trump and everything he is doing, because we lack the ability to step back and set standards based on historical precedent, philosophical principle, and reasoned judgement.

We are so caught up in day-to-day events that we have lost a sense of perspective. We lack the sense of proportion and the peace of mind needed to sense it. But sometimes in an instant everything changes, and it appears some of Trump’s biggest supporters have experienced just such a wake-up call.

Yet, whatever we may deem it right to do, it is important that we center the discussion of what is to be done on principles enshrined in law and brought about by considered reason. And even the fiercest criticisms of Trump now making the news still fail that standard. Sometimes, the logical solution is the most radical; sometimes, bedrock principles sound the most extreme.

This is how we Turn the Tide against Global Fascism. The Greatest Challenge to overcoming President Trump. This is how Trump becomes America’s Hitler. What Trump did to me Personally.