This is how Trump becomes America’s Hitler. 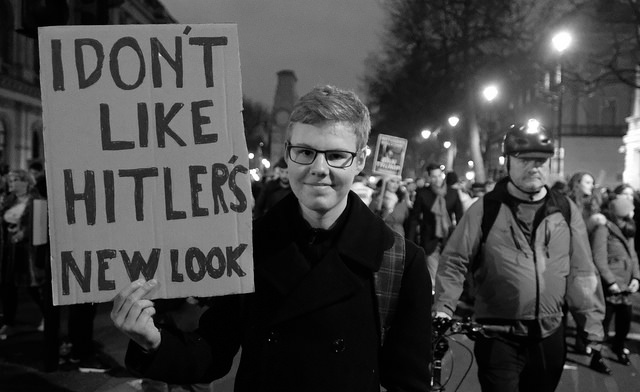 “Stop covering politics,” some of our dear readers cry every time we post something relephant. Look: politics are life. Equal rights, empathy, fair economy, healthcare. We can’t ignore what’s happening, and you shouldn’t either. ~ Ed.

A prominent historian once noted that at the height of his powers Hitler enjoyed the support of 90 percent of Germans.*

When he began his ascent to power in the early 20s, most people viewed him as a rabble-rouser and clown. Yet, somehow, the man who led the assassination of prominent communist and social democratic leaders, and imprisoned a large portion of the nation in concentration camps, ultimately, won the support of the vast majority of Germans.

Americans would do well to ask themselves just what it was that turned public opinion so strongly in his favor, because it may provide clues to how Trump could do the same.

Countless commentators have noted the similarities between Trump and Hitler. Both lied constantly to achieve power. Both possessed little clear agenda. Both built their base through attacking minorities. Both relied on extreme theatrics and propaganda. Both wanted, above all else, to make their nations great again.

But, as so many have noted as well, Trump is not guilty of the same crimes as Hitler, nor even advocating anything so horrific; and the worst of his crimes appear all but impossible to carry out in America today. Germany was a young nation in the 20s, new to democracy and roiling with conflict. Nazis and communists duked it out in barroom brawls. Every party had its own militia. And, at no time between the end of the First World War and Hitler’s assumption of dictatorial powers in 1933, did a majority of parliamentary representatives belong to parties that actually believed in democracy.

Hitler was a populist demagogue who relied on traditional conservatives and monarchists in much the same way Trump has used the Republican Party. But as the cultist leader of an obscure party, newly thrust to power, Hitler needed first to undermine the parliamentary system and then to unify the nation under the spell of authoritarian power if he was to become the Führer we know and love today.

It is no accident that the Trump administration is carrying out, in the words of Steve Bannon, a “deconstruction of the administrative state.” Republicans have been systematically undermining the state since the election of Ronald Reagan in 1980. They have been true to their ideals in diminishing its scope, but they have also been undermining belief in democracy itself. They have done this through stalling important legislation and appointments and flooding the system with cash. They have cut down the size of the government, made it dysfunctional, and corrupted its moral authority. All of this paved the way for the emergence of a right wing demagogue who prided himself on accomplishing things by force.

Perhaps the best way to line up a democratic society behind an authoritarian leader is through waging war. If wars are to be won, then the people fighting them must submit to authority. They must stand united against enemy forces. And they must find it in their hearts to kill.

Hitler found his greatest support in the build-up to war and Trump might do the same. But if Trump is to line up the nation, he will need to find a cause around which his principle opponents can band. Enter the Syrian airstrikes.

There is no doubt Assad is a brutal tyrant. He is responsible for the devastation of his countries’ largest cities. He has killed hundreds of thousands of their inhabitants with chlorine-based barrel bombs and tortured tens of thousands to death in prison. And he has lied repeatedly to the world about the actions of his government and the nature of the opposition. But until a few days ago, Trump supported Assad’s war on the nation he rules and wanted to ally with him to take down so-called Islamic State.

Trump has no idea what is happening in Syria. He has also demonstrated repeatedly that he does not care. He has no strategy for what he will do next. He has repeatedly shown no concern for civilian life. He has shown that he would rather see Syrian refugees die than immigrate to America. His administration is part of a Saudi led effort to starve millions of Yemenis into submission by blocking and bombing their ports, blowing up their bridges and agricultural facilities, and taking their economy back to the Stone Age.

So what is going on with his attack on Assad?

The master of distraction is undoubtedly using the airstrikes to avert attention from the inquiry into his collusion with Putin. He is undoubtedly using them to shore up sagging poll numbers and appear strong where Obama looked weak. He is using them to put distance between himself and Putin, and to win over the Republican Senators who most strongly support the Russia inquiry, like John McCain and Marco Rubio. But perhaps the scariest reason Trump is attacking Syria is because people line up behind a war-time president.

A well justified attack on a brutal leader allied with Russia will set a precedent for later military actions. It will establish Trump as a military leader and justify his authoritarianism. It will allow him to launch similar attacks on North Korea and Iran, and it will make it possible to do so on a whim, without justification or planning, whenever he wishes to distract from his scandals.

The Syrian people deserve to be rescued from Assad. They deserve to see him tried at the Hague and condemned for life. They deserve to live their lives free of suppression and express their views without fear of retribution. But the bombings of a likely sociopath, acting on a whim, will take them no closer to their goal than the entry of the last tyrant distracting from his own domestic worries. Much as the anti-war left became the dupe to an imperial Putin, the humanitarian left is now becoming Trump’s unwitting stooge.

This is how Hitler won over all those social democrats whose leaders he had imprisoned. Whereas Obama failed to abide by his red lines because he respected democratic institutions, the authoritarian strongman can get things done—and this time he got the support of humanitarians. Never mind that his administration is—like Hitler’s—irrational, inexperienced, incompetent, and uninformed.

Trump becomes America’s Hitler by getting things done where his party made them otherwise impossible to do democratically.

Trump becomes Hitler when all of us give up on the messy and complicated process of forging a social consensus through reason.

* While there is really no way of assessing whether he actually enjoyed 90 percent support, the eminent biographer, Ian Kershaw, in commenting on this assessment in The Hitler Myth attests that personal diaries and letters demonstrate an astonishing level of allegiance.