Welcome to the “Most Wonderful Time of the Year” when the mass uprising for personal betterment is upon us.

‘Tis the season for New Year’s resolutions to manifest into big goals…but, small talk. Year after year, the numbers are clear. ‘Tis actually the season to make merry, meaningless promises that nine out of 10 of us knowingly won’t achieve.

I’m guilty. Every year, I aspire to eat healthier, exercise more, and stop drinking so much. Every year, these thoughts die a solid death on January 1st, as I crawl out of bed long enough to hunt and gather my hangover cure of a cream cheese bagel and a Bloody Mary. Another year, another fail.

For the 10 percent of people who keep their New Year’s resolutions throughout the year, go you. But based on human majority, I call big-time bullsh*t on this massive, societal self-improvement flop.

The thing is, I do appreciate the built-in “refresh” button that the Gregorian calendar annually provides, even if I’ve come to terms with the reality that no “new me” is ever going to kick off successfully on January 1st.

In fact, I think the idea of a “new me” is hindering any chance of success at all. The “new me” will never be, because the “old me” is not going anywhere. The old me knows herself well enough to know she won’t be turning into an early rising gym-goer at midnight on the day of highest alcohol intake, ever.

True change doesn’t happen overnight anyway, so how did we as a society get locked into the Cinderella story of “New Year, New You?”

Goal setting is great—but making empty promises that keep our mind-set stuck in a cycle of “ready, set, fail” is more harmful than helpful.

Sure, our minds may be motivated by the idea of achieving results—and even passionately intending to do so—but if our motivation isn’t authentic to our actual desires, our actions won’t follow suit.

The only thing New Year’s resolutions seem to create is guilt, shame, failure—stir, and repeat. What a miserable way to start what I swear every year is destined to be: my year.

What all this boils down to, is figuring out a way to stop putting so much pressure on ourselves to create grandiose changes in our lives once the clock strikes midnight.

I propose a new, collective resolution: may we all lower our expectations of ourselves.

Can you imagine a New Year’s Eve you can enjoy, exactly as you are? Without the pressures of turning into a healthier, happier pumpkin at midnight?

Screw the “new you.” Now is the time to just be you.

Screw self-improvement for anyone but your actual self. Screw New Year’s resolutions—once and for all.

Now that sounds cheerful to me. Instead of allowing the idea of monumental transformation to hit us like a mack truck of failure come January, let’s commit to evolving daily.

The difference between the “new me” and the “old me” lies in the small actions I choose to take every day—not in the artificial resolutions set because everyone else is supposedly jumping off the chronological cliff.

“It is not the movement of the clock that produces the newness of life. It is the movement in your mind.” ~ T.D. Jakes

Eating healthier, exercising more, and drinking less are pretty awful goals. And they’ve hung over me like some kind of unreachable mistletoe.

But, since I swore away New Year’s resolutions and resolved to evolve daily, I’ve achieved more than I thought I ever would.

I eat more salads and less sandwiches. I walk up the stairs instead of taking the elevator. I’ve switched from mindlessly downing wine bottles to consciously sipping glasses. I experiment with new morning rituals and have weekly gratitude ceremonies at sunset. I go to sleep earlier and have worked my snoozing down to three times instead of three hours. And, I only drink rosé on Wednesdays.

By releasing the built-up pressure of New Year’s Eve and allowing myself the space, time, and presence of daily action, these small shifts have broken my old patterns and created new ones. Tangible, mini-goals to play with today and every day expel the guilt and build a more sustainable lifestyle.

It takes 66 times for a pattern to be embedded into your DNA. That’s 66 moments of intentional motivation to spark a new, automatic neural connection, or a new habit. If you want to create a shift in your life, think small. Act smaller. Forget big goals. Go for the tiny tasks. Motivate your own process, and eventually, you’ll see the progress.

How? I’ve released the need for far-off results and jumped into the journey of now. I acknowledge the unhealthy patterns that keep me stuck and am mindful of when I can do things differently. By noticing my typical, daily decision cycles, I experiment with new ideas. It’s like a conscious game of truth or dare in my mind.

And for once, I’m excited to celebrate the new year, just the way I am, and revel in my Bloody Mary and bagel hangover brunch on January 1st. Goodbye guilt, hello glory! 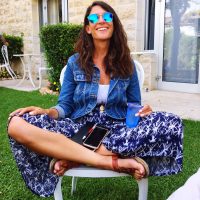 Zo Flame is mover, shaker, content creator, writer, poet + lover of learning. She creates safe spaces for women to simply be themselves and connect with whatever comes up. Zo … Read full bio