Why Presence is my Charity this Christmas.

I really don’t like it when people talk about being present.

I mean, I obviously have nothing against actually being present, but I don’t like the rhetoric. There’s the kitschy phrases on home goods at craft stores that remind us that today is a gift and that’s why it’s called the present—and I hate that. I can’t stand easy puns.

It’s also confusing to me when someone says, with truly good intentions, no doubt, “My New Year’s resolution is to be more present!” Because that seems both forward thinking and time bound, something that the here and now is clearly not.

Really, this is all probably a sign that I need to be more present and enjoy mildly humorous throw pillows and people’s good intentions. I taught yoga for years for crying out loud; I really should just inhale and exhale through this stuff. I’m working on it. (#blessed)

I realized I needed to “work on it” (that is, a tolerance for presence and the sweet and seemingly predictable conversations we have about it) in the midst of one of the most hectic periods of my entire life. November and December tend to be hectic for everyone, but I’ve been feeling it intensely this year.

I’m in the process of transitioning to a new job, maintaining a long-distance relationship, releasing my first ever book, and being a decent (and peaceful) human all within a few weeks of each other. Add to that the feeling most people get around the holidays: the need to be volunteering more, donating more, calling my grandmother more, and putting more than just coins in the red Salvation Army bucket outside of that damn craft store.

To be honest, more wasn’t an option for me this year: I didn’t have the money or the time or enough espresso shots to get me to where I thought I needed to be from a holiday-spirit-heartfelt-giving-with-handmade-cards-and-gluten-free-cookies standpoint. If I were to survive the chaos I felt churning inside of me, creating some perception beyond the traditional cliché meditation talks was going to be necessary. So, instead, of signing up for a shift at a food bank or taking on a toy drive, I made a different type of decision.

Presence would be my charity this Christmas.

It’s not a cop out, I swear—even if at first it sounds like it is. Lord knows those food banks and toy drives are some of the most necessary and magical parts of the holiday season. But another truth is that times change and energies shift, and it’s only logical that how we give ourselves shifts as well. Maybe it doesn’t check the external charity box (and internal meditations don’t count as tax deductions, I checked), but the intentional focus on being present opened me up to give in a way I hadn’t discovered before.

My conscious attention on being present started out small. I began with: no music in the shower. That’s all. Me and too-hot water early in the morning before work in silence. Strangely, more noise seems to be the easiest comfort during the noisiest times in our lives. It is the quiet that is wildly uncomfortable.

What’s scarier than a head full of to-do lists and no National Public Radio to drown it out? The answer is very few things are ever as difficult as resting in an anxious period. But, slowly, silent showers became easier. I focused on the physicality of the practice instead of the the to-do lists. Eventually, I could shave two legs and not just one in the screaming silence. Until eventually, the silence didn’t scream anymore. It hummed.

Then, I moved on to no radio in the car on the way to work. And it was…anxiously boring. You know the type of boring: when you can’t find a parking spot and the yoga class starts in four minutes. Or when the elevator won’t come, but you are wearing heels and carrying coffee and you are already late. But, with time, that feeling melted with the ice on my windshield—just in the center at first. Then, slowly to the outer edges, until even my limbs felt a sort of release.

I was gradually learning to be satisfied in the quiet, in the mundane, and it was making me a more peaceful person. I was not (or, more accurately, less) frustrated by other drivers or the red lights or by the ice on the road or the woman with the umbrella taking so, so long to make her way across the street—because I was already in the middle of silence. I did not need to travel to stillness to find peace in a slow commute.

There was a defining moment when I determined that presence could adequately serve as my charity. I was at the grocery store, and boldly left my phone in the car to brave the supermarket with a little bit more intention.

Traditionally, my grocery trips were spent with my phone pressed between my shoulder and my ear at an unnatural angle as I navigated the aisles talking to my mom about the three B’s (book release, boyfriend, and boss. Obviously.) But, on this notable day with my phone in my car, I took the cart with sticky wheels into sharp corners and I noticed that a grandmother could not reach an item on a high shelf. As most of us would have done, I helped her grab it and put it in the cart. “There’s a few more things that I haven’t been able to reach, would you mind helping me?” So I helped, because #decenthuman and I believe if people are in the right mindset to offer kindness, they will. And she smiled and said thanks and I smiled and said, “Happy Holidays,” (because you should cover all of your bases).

And that was that. That was the defining moment.

Now, I am not telling you this story because I believe that I have completed some truly great, inspirational act of kindness. I am telling you this story because I know for a fact (embarrassingly enough) that if I had not been actively working on being satisfied in the stillness and comfortable without the noise and intentionally leaving distractions locked in my car, I would not have noticed a woman who needed an extra reach at the grocery store. That’s not patting my own back. That’s realizing that there were probably countless times when I could have reached out in charity but did not even notice due to the activity I insisted my brain needed to stay afloat in the chaos.

I’ve tried to notice more instances when mindfulness has counted as charity, and nothing comes to mind that will make others say, “Well good for you, you inspirational game changer.” It’s a more internal change, something much subtler. I know I smile more when I pass people on the street or in the halls at work or on a run—because I see people more. I know I feel more focused on the phone with a friend because I am not mindlessly scrolling to occupy the part of my brain that demands instant and perpetual gratification. I think my ideas are better. I think my thoughts are clearer. I don’t have to charge my phone as much.

I am of the belief that both beauty and charity are in the eye of the beholder. I have felt another’s presence create the peace or inspiration in my day when I have felt low, and I have called that charity. So yeah, I believe that presence can be my charity this Christmas.

After all, today is a gift—that’s why we should all be present. 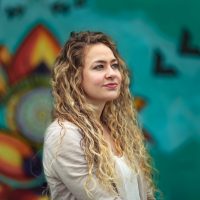 Ella Kerr lives in the Pacific Northwest and has a passion for women’s education and surf. You can check out her novel,  Sugar and Dust, as well as other musings on her web… Read full bio