My wife and I had a miscarriage a few years back.

This is predominately how I came to have a better understanding of this difficult subject.

What upset me was I thought miscarriages were not that common—until I realised that they were, and were just not being talked about and given the attention they deserved, considering the grief and distress suffered by the parents.

I wanted to know why people were going through these life changing, emotionally devastating events resulting in a great sense of loss of what promised to be life fulfilling events, but socially, it was being kept under wraps—almost like an embarrassing secret.

I had only ever had one conversation about miscarriages with a work colleague, and it was only necessary to coordinate time off and other work logistics. I don’t think we would have discussed the topic otherwise, and even still, we conversed quietly, hidden away, for fear anyone would know the content of our short discussion.

I know men are not great at talking about emotional issues, but maybe that needs to change.

Personally, what I felt after our miscarriage was that I needed to talk to people about it. This was not something that I felt had to be kept a secret and told only to the necessary few.

It is mentally unhealthy to suppress the emotions that come with a miscarriage. There was a profound sadness in the loss of our potential son or daughter that was necessary for us to share. There needed to be an acknowledgment of what had happened, a major anguish in our lives.

What I discovered from talking to people about our miscarriage was a cluster of stories from both friends and family who had gone through similar difficulties and who shared our grief. These were major events in their lives that I hadn’t known about, that were not talked about in social conversations, and had only came to light when I, too, became a part of that ill-fated group.

It shocked me, because miscarriages are not something we choose. They can just happen—they’re nature’s way of saying that this time, it is unfortunately not going to work out.

It is sad but it is not our fault. There is no need to be ashamed or embarrassed, and this should not be a taboo subject. It’s not like deciding to terminate a pregnancy, for example, where there is still a social stigma attached to this decision.

In the case of miscarriages, it is generally out of our control. We should not feel like we did 50 or 60 years ago, where virtually anything to do with the procreation of our species was forbidden to talk about or, heaven forbid, even think about.

However, asking ourselves what we’ve done wrong is a common question after a miscarriage, and of course the answer is invariably nothing. Feelings of guilt can be erroneously misguided.

The truth is, miscarriages are completely common. It is estimated that 10 to 25 percent of known pregnancies end in miscarriage, with the actual number estimated to exceed these figures. Happily, most women who have miscarriages go on to become pregnant again and have a healthy child.

I remember a few years ago when Mark Zuckerberg and his wife Priscilla Chan announced that they were expecting a baby. The couple also revealed for the first time that she had previously experienced three miscarriages. They were applauded for their openness in bringing the commonality of miscarriages to the fore. It still made me wonder why this topic needed a famous ambassador to tell us that it is okay to talk about it.

The grieving process afterward can be an uncertain time.

People can find it difficult to perceive or imagine a loss of someone that they have never seen. A considerable amount of your emotional and physical reactions will largely depend on your views on life—when it begins and what constitutes a human loss.

After ours, we received a complete scale of reactions from people. Some offered a pat on the back as a “hard luck” gesture and that was it. Others grieved with us—perhaps they knew themselves what that kind of loss is like. Some spoke of the “soul” who did not make it but would be watching over us. Others were expecting a funeral service for the life that was lost.

It can be hard to know where exactly we fit in, and I found it difficult. Should I just have moved on? Did I cry enough? Should we have had a service? Either way, the importance of miscarriage being an open, honest, and uncensored subject cannot be overemphasized.

It is difficult enough as it is when we are going through the experience with all the confused emotions that are aligned with it, the misguided guilt, the loss, the remorse, the misconceptions. The way to deal with these emotions effectively is not by hiding them, pushing them down, and feeling like you’re at fault for what happened. We should not feel ashamed to talk about it openly and with the social acceptance to do so.

I’m not saying it has to be shouted from the rooftops, but it is okay to talk about miscarriage. And for the rest of the world, it is okay to listen, understand, and sympathize. 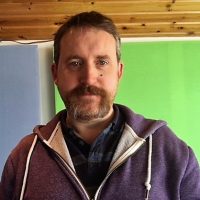 Darragh Quinn is a writer currently living in Co. Galway, Ireland. He writes extensively on social commentary topics and issues but he also has a passion for fiction, poetry a… Read full bio