A Beautiful Ritual for Coping with Miscarriage . 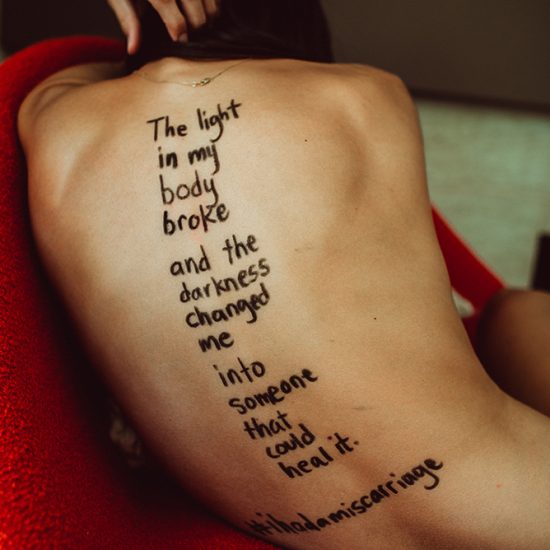 Writing Poetry on the Skin of Women To Honor Their Losses

October is Pregnancy and Infant Loss Awareness month. Miscarriage is so common, it would be weird if you didn’t know at least one woman who’s experienced it, since one in four pregnancies ends in some form of pregnancy loss, as it turns out. I thought I didn’t, but that’s when I realized that women who have gone through pregnancy loss tend not to talk about it. I found out society trivializes their losses, making them feel uncomfortable to share their story, as if it’s not a real loss, not real death.

That’s why this month exists for them. And that’s why I decided to bring my art into their sphere. Art as activism. Art as ritual. I write poetry on people’s bodies, and I call it Skin on Sundays. I write the poems inspired by their canvases. In this case, it would be poetry to express and memorialize their pregnancy losses.

I’m not sure why society minimizes the trauma of miscarriage, or at least not any surer than I am about that than why society tries to control women’s bodies in general. Just add it to the list, I guess.

This isn’t to say that all women who experience miscarriage, stillbirth, and other kinds of pregnancy loss experience trauma. There are some who get hit by the loss and others who, for whatever reasons or circumstances, don’t.  However, of those who are floored with grief and a whole mess of intense emotions because of pregnancy loss, many are suffering in silence, and it is long past time for that to change.

Instagram is an interesting place. It’s no longer just about checking out what your friends are up to across the world or what your neighbor had for lunch. It’s also a place for art and ideas to circulate. While it is possible to aimlessly scroll and scroll without much fluctuation in your heart and mind, it’s also possible to be deeply moved by a single post. That’s what happened when I stumbled upon the @ihadamiscarriage feed. It was a photo with a caption about a woman who felt guilty about what she thought of as the failure of her body in her miscarriage. I was dumbstruck. It had never occurred to me that a woman might feel that way. In my mind, it was clearly not her fault, but what could I know. I’ve never been pregnant, had never even talked to anyone about miscarriage before. When I checked out other posts from the feed, I was pulled in by these stories. It was heartbreaking, and I was at a total loss.

How could it be that I had never encountered anything like this before, at 33 years old? As I did more research, it became painfully clear that society heavily encourages women to keep their losses to themselves because “it’s not exactly a real loss.” They should get over it and move on, apparently. And the quieter women are about it, the more society misunderstands what they go through, the more awkward it becomes to talk about it, the less people, people including me, know what to say. It’s easy to be insensitive when you don’t understand something, and that is pretty much what happens to women when they bring up miscarriage. People are generally insensitive because they don’t get it and have never thought about what it might be like to go through it. The trauma is for many an unspeakable, gut-wrenching, a permanent painful memory that leaves a hole that is never truly filled, not even if you are able to have a baby afterward, which many women are not. A person going through this kind of trauma, the last thing they need is the insensitivity of others—loved ones included—minimizing their pain, accidentally blaming them, and making all sorts of other comments that do the opposite of help, simply because they don’t understand, largely because they haven’t been taught how to understand.

That is why I felt compelled to connect with Dr. Jessica Zucker, to combine my poetry project with her campaign around miscarriage. I wanted to use my voice, to become an ally in raising awareness and reversing the silence of women who have experienced pregnancy loss.

We spent a month planning and organizing an event in Los Angeles where 9 women—10 including Zucker herself—would be adorned with a poem that I would write on their skin. In that month of planning, each woman told me the difficult and painful details of the trauma she went through or is still going through. Women who started loving their babies the moment they found out of their existence, women who were crushed by the loss of losing a baby they so anxiously awaited. Some were able to go on to have a baby after, and others not. Some spent thousands of dollars on getting pregnant, on surgeries, on medical bills, only to lose their babies. Some were told how to grieve and given time restraints that were deemed appropriate. Some went through hours of excruciating labor to deliver a lifeless body, knowing all the time their baby was already gone. Imagine 11 hours of labor, normally a process whose immense pain is forgiven by the joy of motherhood that comes after. In this case, she knew the joy of motherhood was not coming after. She knew death was present the whole time. These stories left me weeping, my heart sinking, my mind wondering how they live their lives now, how that hole affects a person’s entire existence, a hole that will never go away. I wondered what it looks like to mourn and miss a miscarried or stillborn baby, in the case of never being able to have children and also in the case of having children after.

Writing their poems was scary, and perhaps that made it all the more meaningful. I took what they conveyed to me, moved beyond the words they spoke into what I thought lay behind them, and tried my best to create something they felt connected to, that they could take with them for the rest of their lives. Because it is true. When others recognize our pain and loss, it makes us feel the loss is substantiated. It gives us empowerment to feel what we need to feel without shame.

My fear came from wondering if I had done it right, captured a piece of what they felt, if they would connect with the poem or…not. Spending this kind of emotional energy searching for the words for each woman’s individual experience is not, nor should it be, an easy task.

Perhaps it was a mix of the ritual of writing the poems on their bodies, of being in a space that Dr. Zucker and I had created especially for each of them, for this ritual, a space where they could relive their grief while feeling open to express it, and what the poems evoked, but there were tears as they read their poems. One woman hugged me with her soul as she wept. I felt it. She whispered a thank you in my ear, and I wonder if she knew how much it meant to me. Another woman asked one of the photographers to read the poem to her aloud directly from the skin of her back as she photographed it. Some women shook as I inscribed the poems on their skin with my pencil of eyeliner. We locked eyes and shared moments of love and gratitude.

My gratitude was for how they let me in, how they allowed me to see their pain raw and create a piece of art from it. That is no small gift. I am so grateful for their openness, their bravery, their warmth. The only firm goal I have for my work is to make the world better. In this case, even if no one saw their physiopoetry, the act of making this come to life has already made the world a little better. I witnessed it with my own eyes, felt it in my heart. Dr. Zucker was right in suggesting the need for ritual in pregnancy loss. Rites and rituals carve a space for healing. Without that space, without that recognition, where does that leave them? If we as a society can do something to help people who are hurting, hurt even just a little bit less, we should. Let’s not leave them without a space to grieve anymore.

You can check out the entire series of photos for this meaningful collaboration here or here.

Thank you infinitely to birth doula and photographer Rebecca Coursey for taking these beautiful photos, and to Jessica Lynch for capturing and composing this lovely short video to document the process and all that went into it.