“Everything that has a beginning has an ending. Make your peace with that and all will be well.” ~ Gautama Buddha

A special woman with an immense heart is soaring up into the pure white light from which she came.

A gathering of friends, old and new, sat together in circle and sang and cried and spoke softly, passing burning sage around as a talking stick, sharing sweet stories and memories—true poetry from the heart. Laughter and sadness co-mingled.

It seemed like she would be around—in her humble, kind, wrinkled, gray-haired, natural form—forever. And she does live on in the lives of countless people around the world whom she touched so deeply with her simple, loving presence.

An Earth grandmother, a woman with fabulous red shoes and glasses, a Bodhisattva, she left her physical body at sunrise on a Sunday earlier this month. After a long, global life, after decades spent as an energy healer and light worker, after a shockingly intense cancer, her body dissolved in a matter of months.

Suffering has ended and transformed into liberation.

I had several energy healing sessions with this special woman over the past few years. Her work was quiet and subtle. It shifted things in me profoundly and helped me in ways I still don’t fully understand, yet. After each session, I would open my eyes and feel such loving compassion pouring forth from her. I usually cried softly at this moment, releasing tears, letting go, and expressing gratitude.

After what turned out to be our last session, about a year ago, she had a stack of books she was giving away. I asked her if I could have the Tarot card deck and book from the pile. Of course, she said. They’re yours.

I was thrilled, since I’d lost my previous deck several months prior. Now, I cherish those cards more than ever.

I pulled four Tarot cards that embody some of her greatest teachings from the deck, and included several quotes from the book she gave me, The Mythic Tarot by Juliet Sharman-Burke and Liz Greene.

May these symbols and messages be of benefit. 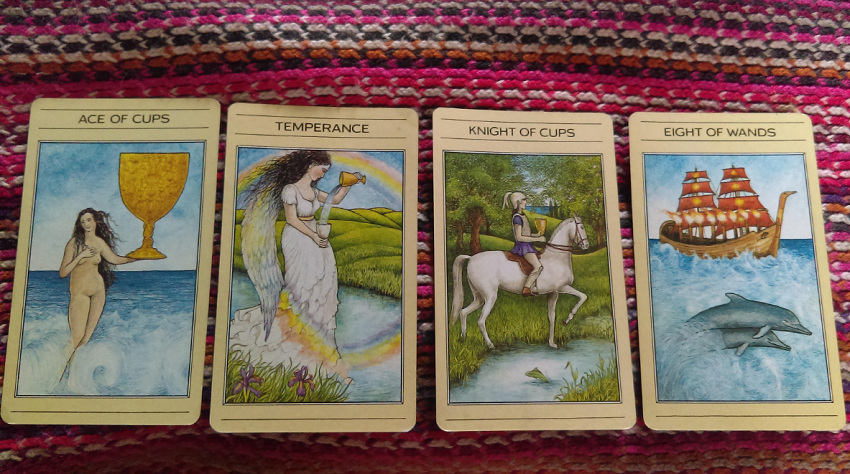 “The Ace of Cups heralds an outpouring of feeling, although this feeling has not yet differentiated and emerges as raw, vital and often overwhelming. The individual is ready to embark on the journey of love.”

Allow—Kirsten would enunciate the word with devotion, humor, and wise knowing.

Allow, more than accept. Let it be, more than let it go. Allow feelings to flow, to come and go. Don’t resist, reject, or deny, lest those intense, ignored emotions get buried in the body, in the muscles and viscera, to be dealt with in a more difficult manner later.

“Often the Knight augurs a proposal of marriage, or an experience of falling in love. Sometimes, on another level, he implies an artistic proposition, a relationship of another kind which is no less exalted and idealistic.”

Kirsten once told me the remarkable story of how she met and married her first husband—and how they separated and divorced and eventually married again.

She was a woman who loved life and loved herself. This was clear from the essence of her being. She was incredibly present and had that rare ability to make everyone feel special and deserving of being heard.

Her highest form of art was how she lived, the way she moved, and how she spoke and comfortably embraced silence. We could all aspire to be more like that: here, now, loving, listening, creating.

“The Eight of Wands heralds a period of action after delay or struggle. Travel is sometime implied, or a clear stretch of fruitful activity, where the imagination flows unchecked after anxieties and tensions have been overcome or resolved.”

The imagery of this card, a ship in full sail with dolphins playing in its wake, is appropriate for Kirsten, who was a voyager, someone who sailed across the ocean with her partner in her younger days.

Born in Denmark, she was a graceful global citizen who split her time between Australia and Guatemala, with many stops in between. May we all cultivate the buoyancy and confidence that this card represents on our journey through life.

“Iris, guardian of the rainbow, suggests the potential for harmony and cooperation resulting in a good relationship or happy marriage. We are challenged with the issue of learning to develop a balanced heart.”

By the time I met Kirsten, she was in her late 60s and the epitome of balance—always looking sharp, balanced, and poised, yet calm and relaxed. Grounded, yet connected to the sky.

She had learned to develop a balanced heart, not too open or closed, just right. And she taught others—subtly, intuitively—through the example of her own life, how to cultivate a balanced heart, and how to stay centered, compassionate, and present, regardless of the circumstances.

My life is better for having known her.

Thank you, beloved friend. I love you. May you be free.

Practicing Non-Attachment following the Death of a Loved One. Life-Changing Life Lessons from Two Dying Men. This is the Best Response I’ve ever Heard about How to Process Grief.
See relevant Elephant Video