How I quit smoking – or how to quit anything

I used to hate to admit that truth. It wasn’t something I was proud of, nor is it something in this day and age that one shares with the world at large without experiencing backlash. The irony of being judged for smoking cigarettes makes me chuckle as we vape, video, surf, drink and drug our way to avoidance and numbness at an ever increasing rate. I find it hypocritical when someone offers up a scathing commentary on smoking while stuffing a Twinkie in their chubby pie-hole or heading back to their dank, darkened room to bang out another 5 hours on some violent video game. Despite our advances in medical knowledge we are, as a society, more inclined to engage in numbing behavior than ever before in history.

I started smoking at 13 though I had my first tentative puff off a butt I pilfered from my mom’s ashtray when I was 9.  I picked it up as a way to look tough in the face of the daily bullying I was bombarded with in a new junior high. Between a vicious divorce and daily violence at school it was either develop a thick skin and tough persona or die.

Thank goodness the smokes won out.

After my body developed a dependence on nicotine it was the habitual ritual my brain got hooked on. I loved a cigarette with my coffee. I enjoyed a cigarette after eating. I smoked after school and snuck smokes in between classes. I had that last bedtime ciggie and thought nothing of it.

Years passed.  In my early 20’s I worked my way up to a pack a day.  I was a dancer in New York City and we all smoked like chimneys. We’d be outside in the icy New York winter wearing our leotards, tights, ballet shoes, leg warmers, wool scarves and overcoats, hunched over our cigarettes like street kids hoarding a scrap of bread. It was a line of smokestacks in pretty pale pink. Superficially, we smoked in lieu of eating so we could be skinny. We smoked to cope with the stress of “making it”.

More years passed. I was a full fledged smoker. There were days when I smoked two packs a day. Fortunately for me I couldn’t afford more because smokes were expensive even back then. Homeless people offered me change if I would only give them a smoke. The days of easily cadging a smoke when I was a teen were a faded memory. Quitting smoking was considered the poor man’s financial planning.

I grew up and my habit grew with me. I moved my habit from Massachusetts to New York to California. I moved my habit into a house in suburbia and this guy married me and my habit even though he was not a smoker.  Evidently, my guy’s love was not only blind but had no sense of taste or smell. My dad once told me that kissing someone who smokes is like licking a dirty ashtray. Sarcastic hypocrisy from a sometimes smoker.

I made one concession in all those years. I decided to refrain from smoking in my suburban house.  I was now a fixture on the doorstep or on my back patio. (I will confess that I cheated whenever I painted a room in my house. I told myself that the smell of paint covered the smell of smoke.  Every room in my house received multiple paint jobs over the years).

Periodically I would try to quit and failed countless times. It just never stuck. I began to think I needed motivation of a tragic sort to lift me out of my inertia.

Tragedy struck when my mom died of lung cancer at the youngish age of 65. It was a horrible death. Guess what caused it? Yep… she died a chain smoker.

My father, who was an on and off smoker much of his life, went into the hospital for a lung biopsy.  He almost died in the recovery room and ended up on oxygen for the short remainder of his life before a heart attack abruptly snuffed it out.

Then something odd occurred. My best friend called me and said she had been diagnosed with some strange genetic disorder called Alpha-1 antitrypsin deficiency that had a high probability of causing lung disease. She had never smoked a day in her life and was potentially going to suffer as if she had.

I had an epiphany that day without being aware of it.

Here is the secret you’ve read this far to hear:

I told you the truth at the beginning of this article.

Before you snort in disgust and stop reading in disappointment that I haven’t provided you with a super easy answer or a magic bullet, give me a moment to see if I can’t show you how a simple change in perspective can create a shift of monumental proportions.

Back to my story.

I realized that I was voluntarily choosing to destroy my body while my best friend had her choice taken away from her by genetic lottery.

I decided that day to not smoke. I didn’t make some big pronouncement to the world or my loved ones that I was quitting. I knew that path all too well. BIG failure there many times. I simply chose to not light up. I had no grand plan, no pathway, no goal.

I choose not to smoke… today.  I can smoke tomorrow if I want. It’s my life and my body.  The turning point and key for me was to realize it was also my choice.

There is something powerful that unfurls inside you when you truly take responsibility and own your choices. It’s like being a rockstar on the inside. We can fall down over and over but it is the getting up each and every time that makes us stronger, more powerful, and more resilient.

I don’t have the urge to smoke because I know that if I choose to, I can light up. I simply choose not to – right now. It’s not a daily conscious thought either. It was more frequent maybe 10 years ago but faded relatively quickly because it just wasn’t a big deal. There are days where I would swear I remember smoking somewhere in the past 10+ years. Those memories are false because I know that if I wanted to, I could and would.

I didn’t set myself up for failure by making a huge pronouncement to the world or promises of abstaining for life. Those declarations are huge, onerous and unnecessary. We make our way through this world by taking baby steps.  It is rare that we succeed wildly in one humongous step.

The only other thing I did, unknowingly, was to find something to replace why I was smoking in the first place. At the time I chose to not smoke I had just discovered the sport of archery. Without realizing it until later, I had replaced my need to relax and destress with training intensely on the range in a sport I rapidly developed a deep passion for.

If we want to remove a behavior then we must fill it with another. Nature abhors a vacuum and sure as the sun will shine, we will return to our habits if we do not find something to take its place.  It doesn’t have to be something grand. It simply must do a similar job or create a similar effect as the behavior we want to replace.

Every behavior has a reason behind it even if you do not know what that reason is.

I find that labeling myself an addict is pointless and shaming.  I choose to take responsibility for my behavior and change it at will.  I allow for mistakes, I allow for success and I allow myself to be a flawed human.

As long as we keep getting up after we fall we can learn some small thing from each experience. We only need to be brave enough to look in the mirror and see that we are more than our behaviors.  Those we can change.

Our behaviors do not define who we are. They are coping mechanisms and survival techniques we use to deal with an oftentimes difficult world. Not a single one of us grew up desiring to engage in self-sabotage.  Strip away our behaviors and what is left is a beautiful soul filled with the best of intentions and a loving heart.

If we take baby steps we can achieve anything.  The key is to take one step at a time, stay in the present moment and realize the future is not set in stone.

Go forth and make a choice… again, and again and again! 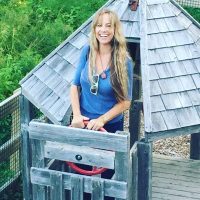 Grace has taken huge risks and giant leaps of faith on her journey through life; from surviving brain surgery as a teenager, to receiving a scholarship at a leading dance aca… Read full bio