What Staring at a Painting taught me about the Importance of Struggle—both in Art & Life.

Great revelations come at the price of struggle.

This is as true in art consumption as in personal growth.

If you’ve ever stood in front of a magnificent painting in a museum, you may have felt stunned. Stopped. Unable to move as your mind sought an answer to why the piece so intrigued and captivated you.

For me, this happened at the Prado Museum in Madrid. I stood in the chilly, ornate hall in front of Velázquez’ “Las Meninas.” It is a huge painting. For an unbroken hour as others came and left quickly, I tottered in front of the sedate canvas that depicts an elegant doll child in a picture-studded studio.

The painting mesmerized me. I thought it was the piercing eyes, the costumes, the poised poses. Yet I wasn’t certain. I went back to it over and over again in the coming months. I felt it was my duty to understand what Velázquez was trying to teach me through his haunting images.

This artwork was inaccessible to me—so I stayed with it.

Built into art is an inherent groping toward our attention. Art reaches out to us with the hope that we are smart and kind enough to take time to contemplate whatever message it is trying to share.

For many of us, art feels inaccessible. We struggle to understand its strokes and lines. Because art demands an interpretive effort of us, its works can seem daunting, intimidating, confusing. Art confronts us with a decision: either to stretch ourselves or to move on carelessly.

Art takes time to consume. Time to register and gather what the creative work conveys. Impatience will not be of benefit in this endeavor. To be absorbed in a meaningful way, art needs our discipline of slowness.

When faced with the inaccessible, my response has always been self-reflection. I ask myself questions about why I don’t understand the piece. I look inside myself. I take the mysterious as a beautiful problem to contemplate. As if life is throwing me a koan or a riddle whose solution may just awaken me to a new part of myself or to the world of experience.

For instance, if I read a poem that does not make sense to me, I feel obliged to reread it until I can make sense of it. This is a valuable part of my autodidacticism. The inaccessible poem gives me a challenging opportunity to learn and improve myself.

The response I rarely choose is to ignore or reject that opportunity.

After revisiting “Las Meninas” many times, I came across a book by Michel Foucault, The Order of Things. Its first 50 pages are an intense, artful exegesis of the Spanish painter’s masterpiece. One work of art interpreting another. Through this encounter, the light came on for me. What haunted me, I realized, was the reflectiveness in the painting that Foucault argues represented a change in the history of perception.

Even when it is “inaccessible,” art stimulates contemplative juices in our minds. What is inaccessible gives rise to beneficial, thoughtful pause. Art drives the truck of contemplative practice.

An artwork does not blatantly give us its meaning. We must work at it for ourselves. We come to art’s silent challenge with our slow, humble intelligence—an intelligence that uplifts us. Every observer is involved in a hermeneutical process. Nothing is given simply.

Why would we expect not to struggle with complexity?

Art is seductive and gripping because it carries within itself that primordial siren-song that beckons softly to the one lashed to the mast on a ship’s deck. Its melodious voice coaxes us onto the pebbly, island shore and into its ruinous arms. Ruinous because the song is forever prodding us toward our own betterment.

Have we become so pusillanimous, obstreperous, and indolent that we just want meaning to be spoon-fed to us without our working to discover it for ourselves? (If you don’t know what those words mean and don’t want to look them up, you’ve proven my point.) Attention spans have dwindled, along with the seeming inability to concentrate for long. There is a concomitant inability to work intellectually for a positive, rewarding experience with an artwork.

Horkheimer said in The Culture Industry: Enlightenment as Mass Deception that in the culture industry the individual is an illusion. He went on to write that he or she “is tolerated only so long as his [or her] complete identification with the generality is unquestioned.”

The culture-producing industry has an easier time selling more commodities and art if everyone is similar.

Art can challenge this notion. Art can raise us to beautiful intelligence and diversity.

Why would any one of us elect homogeneity over diversity? Standardization over authentic uniqueness? Speed over slowness? Ease, uniformity, and conformity over struggle, disparity, and eccentricity?

Art’s tangled roots and leafy canopy spread under earth and across air because they breathe the oxygen of specificity, not generality. Art thrives on divergence, not convergence.

Sometimes this creates the feeling of inaccessibility that it is our task to overcome.

My wife read a revised version of what she originally perceived as a thoughtful, poetic article I wrote. The article’s call to action was, as an insightful, familiar cliché says, to stop and smell the roses. In other words, it was a reminder to slow down and become aware of ordinary objects and our daily relationship to them—objects such as power lines, alleyways, fire hydrants.

Reading the revised article, my wife almost went into shock. She loved the original for its descriptive power and poignant message. She disliked my slashed, dumbed-down revisions. Her response was, “What happened to the art and beauty?”

What makes this anecdote more amusing is that, under the influence of editors, here I was trying to make an article about slowing down speed up. The revisions ruined the article.

Does our speed and social media-driven society create readers and consumers who are so watered down that they need to be told explicitly what the point of art is? Do readers or consumers not have a responsibility to use their intelligence to figure out the meaning for themselves?

Take vocabulary. How easy is it today to look up words we don’t know on our devices? Very easy, even for a Luddite. If having to look up words in an online dictionary breaks the flow of the story, isn’t that one, part of learning and two, part of the artistic message of slowness?

Maybe developing vocabulary is its own call to action. The more tools we have for more powerfully describing our world, the more meaningful will our experiences be.

What my wife expressed as disgust meant that the value of the original artwork was in its slow, descriptive development leading to later revelations. The revised version was shorter, crisper, quicker, and possessed the flippant celerity we have grown accustomed to in our electrified world of hyper-busyness.

Perhaps when we come across a piece of artwork, we should slow down and struggle with its message.

Eventually its inaccessible voice may turn into something accessible to our ears. 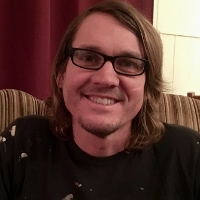