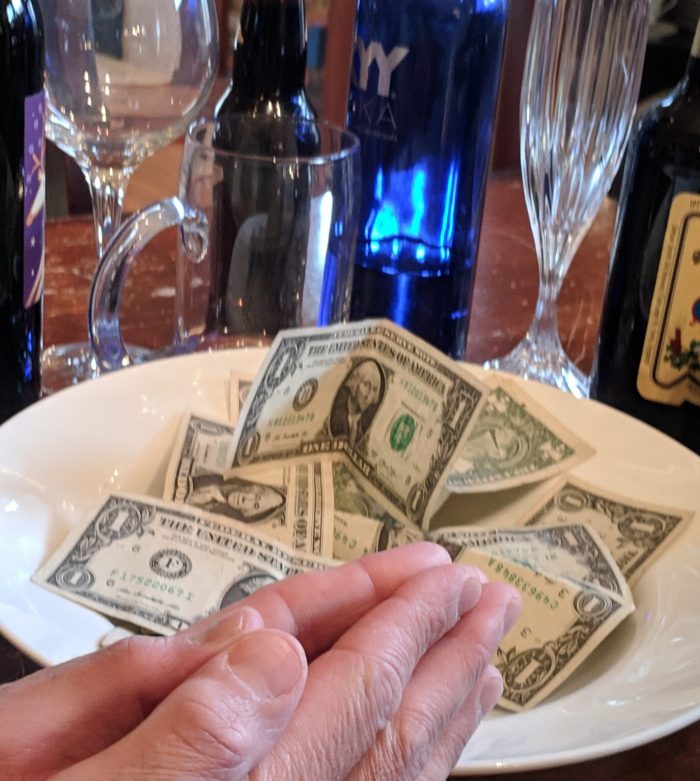 I recently watched a documentary on The Church of Scientology. I am fascinated by how easily the human brain can be twisted and wrinkled and tied up in knots, and the methods this cult uses to gain so many followers is very intriguing. If you think the immaculate conception of Jesus is challenging to believe, you need to hear the one about the frozen humans who were dropped in volcanos by aliens and dispersed around the planet by hydrogen bombs. It’s a doozy, and it’s the core belief of the Scientologists.

How does a story like that crafted as recently as the 1950’s turn into a multi-billion dollar cult-empire? How do so many intelligent, and apparently generous, people believe science fiction so outlandish that Hollywood producers would laugh at the screenplay? How does one wrap his human mind around that tale and whip out his wallet to perpetuate the most outlandish of lies?

I mean, it’s as ridiculous as convincing billions of people to spend their disposable income on a poison that slowly, but permanently, degrades their brain function while causing toxic harm to their organs. It is inconceivable that intelligent people would pay to decrease their mental capacity and expose themselves to increased risk of cancer, heart disease and obesity all in the interest of relaxation and cultural normalcy. Who would ever do that?

You’d have to be crazy. I mean, Scientologist crazy.

And yet, the perpetrators of the fantastical glory of alcohol have built a cult-empire that dwarfs the billions of dollars the Church of Scientology extracts from its victims. The booze industry convinced U.S. citizens alone to fork over $74 billion in 2018 in exchange for diminished health and a decline in quality of life.

It kind of makes the Scientologists look a little less nuts, doesn’t it. Maybe we shouldn’t throw stones when we build our houses out of empty whiskey and wine bottles.

It is not the fault of the drinkers that they drink. Just like the Scientologists, they are believing in the promise of a better life, and they are willing to exchange their health, sanity and fortunes for the chance to feel better about themselves. And that is exactly how a cult works.

It starts with an interest peaked by the stories of people we admire or trust. Interest turns into exploration. Exploration leads to hope. Hope draws us into commitment. Eventually, drinking (or Scientology) ingrains itself in our rituals or habits. We are willing pay to keep the ball rolling, and once invested, we are perpetuators of myth ourselves convincing those who trust or admire us to join the party.

I was exposed to regular, consistent alcohol consumption from birth, and it was always portrayed as the reward for persistence and success. It was the 80 proof cherry on top of the ice cream cone. Poisonous? Expensive? Mind-warping? Addicting? Questions such as these were never even whispered in my direction. Alcohol equaled manhood and achievement and a goal to be strived for above all else.

I believed alcohol was nirvana before I had my first sip.

And as I grew and matured, nothing contradicted the myth. The cool kids drank in high school, everyone I knew guzzled greedily and recklessly in college. The young professionals developed friendships at happy hours as my career blossomed. And my adult neighbors gathered on the weekends to share laughs over beers as our kids scurried under feet.

All the components of cultdom were there. The hook, the promise of something better, the investment and eventually, the normalization of bizarre beliefs and behaviors.

I wasn’t addicted to alcohol. I just worshiped a belief system. Arguably the most popular belief system in United States. And I can think of at least 74 billion reasons to label our national habit the world’s largest and most powerful cult.

Maybe I’m just a whiner who can’t control his own drinking so he points fingers at the innocent sippers and conousours who can take or leave their poison. Maybe so, but we are a lot better at taking it than we are at leaving it.

Maybe I’m just jealous of my father who drinks two gin and tonics every night, with a little wine and beer thrown in on weekends or special occasions. He lives a life of prosperity and indulgence free of calamity or alcohol-induced turmoil. He’s no alcoholic. But do you think he could break his nightly habit now in its fifth decade? His donations to the church of booze will continue to pour in until he breathes his last.

Maybe I’m jealous of the people in the TV commercials who could not possibly look so good in bathing suits on the perfect beach days without the lime floating around in the amber bottle in their hand. What would a beach party be without beer? I don’t know because I’ve never actually seen one. And the recipients of the $74 billion pump a lot of it back into propaganda to make sure I never do.

Maybe I’m jealous of you. You don’t have an addiction to alcohol. Something’s wrong, but it can’t be the merlot or IPA. You don’t feel the way you want to feel or reach the peaceful aspirations toward which you strive, but with meditation, yoga and occasionally, your favorite cocktails with your favorite people, you’ll get there. The drinks are part of the solution, right? The poison can’t possibly be holding you back.

Could you imagine the mass exodus, complete with metal folding chairs being overturned as recruits bolt for the exits, if the story of the aliens and volcanoes and hydrogen bombs was told at the introductory welcome meeting in the Church of Scientology? It would probably look a lot like the evacuation from the bar if we were told about alcoholism, cancer, liver disease, broken families and potential jail time at the first happy hour of our drinking careers. But that’s not how a cult works. You don’t get the full story up front. That kind of honesty would leave Tom Cruise without fellow worshipers and the U.S. alcohol industry with 74 billion fewer resources to perpetuate the myth.

All that’s required to create a successful cult is to put enough lipstick on a pig to make it look pretty. We’re humans, after all. Convince us the pig’s got the answers, and we’ll follow it wherever it leads at any expense despite centuries of evidence that the pig’s just a dirty pig.

But we humans can break free from the confines of cultdom. It’s lonely and painful and full of shame for the years and decades we admired and worshiped the dirty pig. Breaking free from the incarceration we locked ourselves into requires mental deprogramming and unimaginable patience. But we can do it.

We can find what we need just as soon as we stop looking for it in the bottom of a bottle (or frozen-body-filled volcano).

I recovered from 25 years in the cult of imbibery. Early sobriety was the greatest challenge I will likely ever face, and I want to share what I learned with anyone who wants out – who wants the freedom of sobriety. Please read my FREE ebook, Guide to Early Sobriety. Maybe you’ll find what you’re looking for. If not, I think Scientology is looking for some new victims.