What we Misunderstand about Forgiveness—& why it’s Far More Necessary than you Think.

“I don’t even understand forgiveness, if I’m being honest,” I said to a friend a couple of weeks ago.

She had been expounding on details about her husband’s infidelity and gambling addiction, details that would make your skin crawl in anger for her. She has chosen to remain in the marriage for a multitude of complex reasons, including their young daughter and her recent cancer diagnosis, and also, she does still love him despite his betrayal.

After a little thought and a few attempts to define forgiveness, my friend concurred; she didn’t actually have a clear understanding of what it meant either, and so, I posted on my Facebook wall, “What is forgiveness?” It was such a simple question, yet my friends came through with answers and thought-provoking discussion that made it clear to me that I’ve been missing out on forgiveness for most of my life, in situations ranging from bona fide betrayals, abusive relationships, and simple falling-outs with close friends.

The conversation that ensued was extremely provocative, and I sat with it for several days, processing the implications of lack of forgiveness in my own life. I had a habit of abandoning relationships wherein I felt betrayed; if it crossed that line, I walked away and cut many people out of my life over the years, simultaneously abandoning my responsibility to keep my own ego in check, which requires genuine work and mental fortitude.

Forgiveness means a lot of things to different people. For some, their religion or culture strongly guides their perspective. But the first commenter on my post replied, “[forgiveness is] removing your ego from the situation in order to clearly understand it.” This comment sums up most of the comments that followed.

I had been living with the belief that forgiveness meant pardoning somebody of their wrongdoings, giving them a second or third chance, and thereby putting myself back in harm’s way. From that viewpoint, it isn’t actually safe to forgive in many instances. I didn’t understand that forgiveness was actually more about me than it was about them. This whole time, forgiveness meant removing my own emotional charge about a circumstance so as to give myself peace. Doing so does not always entail bringing the offender back into your life; it entails liberating yourself from the bondage of their betrayal and no longer carrying them as an esoteric passenger in your psyche.

Another friend wrote, “Forgiveness is refusing to drink the poison of a grudge or hate. It is letting go of anger and resentment—not for someone else’s sake, but for your own.”

I recalled the situation in my own life that lead to me having sole legal and physical custody of my son, the fear I felt in the midst of that journey, the carnal instinct arising from within me to protect my child, and how, indeed, I have commented at times that I could never forgive his father for such severe neglect and torment. And yet, the mere mention of his name results in a visceral reaction within my body, a tightening of my brow and shoulders, a shallowing of my breath. He has this much control over me still, even years without contact with him, because I have not forgiven him.

I see now that forgiveness is not entwined with any absolution of his actions, but merely a practice to lead me to, “I see that you too were hurting and neglected. It is not okay what you did, but I forgive you, because I see that you were not capable of handling the weight of parenthood. I wish love for you so that you might be able to give love unto others from now on.” My forgiveness would not be an invitation back into my life, but more of an acknowledgement of our humanity and a cutting of the cords of contention between us. Indeed, another friend of mine had commented that forgiveness is, “choosing to prioritize your emotional well-being by transforming destructive emotions into compassion for yourself (and sometimes others).”

I spent some time recently with my best friend who lives in another state, and I brought up my latest topic of interest and asked her what she thought about forgiveness. Without hesitation, she too pointed out that forgiveness is for the forgiver, not the forgiven, but she also made the important point that we must always also work on forgiving ourselves, releasing the burden of the pressure we put on ourselves for mistakes and our regrets and perceptions of how we should have acted differently.

Another friend had simply stated that forgiveness is self-love. I can’t help but assume that many others just like myself have been missing out on this important component of self-love, that our egos perpetually get in the way of releasing the poison of hatred, and, therefore, this poison courses through us, taking up domicile in our minds and bodies.

All of this input on what defines forgiveness sure gave me a lot to ponder, but it also evoked many more questions—namely, how does one implement forgiveness? So, I’ve decided to forgive somebody—what’s next? Where do I begin?

I next posted this question, and many who answered discussed the role of meditation in their forgiveness, practicing metta, or loving-kindness, in their meditations, which consists of sending forgiveness or love to yourself, to the offender, and also to the world at-large. One friend suggested doing an act of kindness from afar, such as sending a note that expresses a genuine sentiment for their wellness. Another suggested reminding oneself that their destructive tendencies are an attempt at self-preservation, thereby allowing you to feel compassion for them.

The act of forgiveness toward anybody is an act of grace for all of us, as it removes the negative ties that connect us and result in a collective bitterness that is interchanged via everyday interactions at mundane places like the grocery store, the post office, and with neighbors.

Choosing to fully vindicate feelings of resentment will simultaneously tip the universal scale of love a little closer in the right direction. 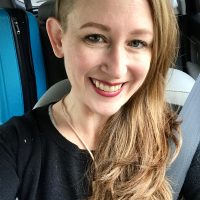 Molly Harbour is a doctor of acupuncture and herbalism in Annapolis, Maryland.  She treats a variety of ailments, but is most passionate about helping her patients step into … Read full bio