It’s Time to Check your U-Mail: Recognizing Synchronicity in our Everyday Lives.

I walked into my body sculpting exercise class on a Monday morning.

Natalie, my instructor, had gone to England to see a UB40 concert and Kelly was her replacement. At the end of class, Kelly put on a song for us to stretch to.

The melody was like a cool ocean breeze that soothed my mind, allowing my body to melt after an hour of working my muscles to their full potential. What was that song? I loved it, and I had to find it.

When I got home, I rushed to my computer and started searching for it on iTunes: “come to me.” A list of 129 matches popped up on my screen. I went through them one by one, determined to find the right one. I could still hear the tune playing in my head, so I knew I would recognize it immediately once I heard the intro.

Then, after the 58th try, I heard it—a beautiful melody by a band named Wah. I pressed “purchase.” Every morning I would play the tune and hum along to it as I was getting ready for work.

A week later, my husband and I were taking an early morning jog in our neighborhood in Montego Bay. The start of spring was refreshing, as pops of color were slowly unfolding in front yards. It was slightly cloudy and humid, with the sun making its occasional appearance—quite the typical weather for the middle of March.

After about a mile, my husband began to feel a little uncomfortable. He returned home, and I finished up the round and met him there. His discomfort continued. I noticed a concerned look on his face as he rubbed his chest, trying to regulate his breathing, while he sat restlessly on the patio. We called his doctor and headed over to his office.

The EKG started, and suddenly I saw the expression on the doctor’s face change: he wasn’t smiling anymore. “Your husband is having a heart attack,” he said.

Waiting for an ambulance was futile at this point, as there was probably only one available in the city. I drove my husband to the hospital with the doctor beside him, trying to keep as calm as any woman could be while driving her husband, who was having a heart attack, to the hospital. Once he was admitted and stabilized, the decision was made to fly him to Miami on an air ambulance.

My sister-in-law took me home to pack a small suitcase. I was calm. Something inside reassured me that everything would be fine. I took a shower, washed my hair, got dressed, packed a few things, and returned to the hospital. Then came the shocking news: because I didn’t have the appropriate paperwork, I would not be able to fly on the air ambulance with my husband. I could only fly commercial.

To make matters worse, they wouldn’t allow me to see him before he left, which made me anxious and upset. How could they be so insensitive? I rushed to the airport, where my brother-in-law was just about to board the commercial flight to Miami. I sent a message to him at the gate that there had been a change in plans, and he would need to accompany his brother on the air ambulance.

At this point, I began to panic. The last flight to Miami for the day had just left—and I wasn’t on it! What was going to happen? I didn’t even get to say goodbye or tell him I loved him. Would I ever see him again? The ground felt like it was sinking from under my feet. My mind was screaming, my body shaking.

Suddenly, my cell phone rang. There was an evening flight to Fort Lauderdale from Kingston. A friend, who had a small private plane, offered to take me to Kingston, where a cousin would pick me up and make sure I made the flight. My ticket had been purchased. The angels came from everywhere to help me on this day from hell. I walked onto the tarmac and got into a tiny, four-seat, pink and yellow propeller plane, parked right next to the air ambulance. Evidently, I was going to Kingston with Barbie!

I then realized that although I still felt frightened and alone, I needed to remain calm. I grabbed my iPod and my headphones and pressed play. For the first time, I listened to the words of that beautiful song:

“Come to me, I will take away your sorrow…I will open up your heart…Come and you will find the inner one you want to, find the inner mind you’ve waited so long to…”

These weren’t just lyrics—they were a message. I recognized these words as a calling that it was time to start meditating:

“Let your eyes meet mine…can you align yourself with constant devotion, find your liberation…”

The lyrics and music pacified my soul.

I listened to this song all the way to Fort Lauderdale, where another angel was waiting to drive me to the hospital in Miami, where my husband had gone into surgery.

I listened to this song for the next four hours in the waiting room. It kept me peaceful and secure as I closed my eyes and heard a voice from within telling me that everything would be all right. This was the beginning of my practice.

My husband came out of surgery and was taken to the ICU overnight. I stayed with him at the hospital. Two days later he was released, and by the end of the month, we were back home. He returned with a second chance at life. I returned with a meditation practice.

The day after we returned home, I went to the gym to thank Kelly for the beautiful song that gave me strength during this experience. She had left, and no one knew where to find her. She had come into my life to deliver a song—her job was done, and I have never seen her again.

The universe sends us messages and messengers, many of which go unrecognized. It is up to us to pay attention, and to be aware of the signs, the assistance, the lessons, and the calls to wake up.

We spend so much of our day on our phones checking our e-mail, but maybe we should spend some time in each day creating awareness and checking our u-mail (universe mail).

Who knows what we are missing? 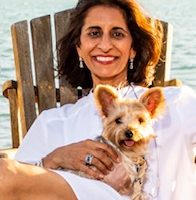 Born and raised in the Islands, Veena Chatani feels like a Caribbean Queen—an Indian/Dutch/Jamaican with hints of American influence. Her parents left India in the 1950s… Read full bio

Crazy Coincidence or Wink from the Cosmos? Finding Meaning in Synchronicities. Plot Twist: “Signs from the Universe” are Not Always what we Think.
See relevant Elephant Video