This is for all the Women who have been Silenced by their Abusers. ~ Eleonora Zampatti

I used to sit at the kitchen table, after I made dinner, making sure all the details in the room were as perfect as he wanted them to be.

Picking the right wine, the right food, the right background music. Behaving like a woman should behave. Listening to him talking about his day, his work, his conversations with his friends. Nodding my head while he explained to me the role of women in today’s society.

Resting at the bottom of the “man-pyramid” due to his own, patriarchal way of thinking. A pyramid created to bring order in this world. An order that would see man at the top—powerful and invincible.

A role I needed to be sure he achieved. A role I should have respected and feared. Because, according to him, that’s what all women want: power and money.

You are probably thinking that this is the story of how I blame him for what he has done to me, or the story where I am going to vilify him in an attempt to victimize myself.

But you are wrong.

I come from Italy. I grew up in a healthy family where my mom took on the role of wife taking care of her children and her husband. She dedicated her entire life to us. She never had a “job”—her job was to be there for us, and she did her best. Every. Single. Day.

She imprinted in my heart the desire to be nourishing and devoted to others. She taught me the beauty that lies in being the silent part of other’s successes. If anything, my purpose in life was to be just like her.

To be there for my partner. To be a good woman.

I confused dedication with suffering. I justified abusive behavior to protect a loveless relationship based on control. I accepted being tamed, silenced, and bossed around because I believed that was what a woman should do.

And this is all on me—I made the decision to turn myself in a shadow, alienate my spirit, and try to change everything I was to please somebody who simply could not be pleased by me.

I chose to sit at a table and condone the words of a man who described women as second-class citizens—power hungry individuals who live their life in the attempt of destroying men with lies and manipulations.

I chose to become part of the problem because, by accepting his words, I betrayed every woman I know.

I betrayed all of us.

I chose to stay and look the other way because I was too afraid of the consequences of me disagreeing with him. I chose to stay until one day, tired of being left alone and put in place by the one person who I loved the most, I decided to stop fighting to be loved. I decided to finally stand up from that chair where “I belonged” and simply say no.

By doing so, I did not just burn my relationship to the ground, but all of what felt so familiar to me until that day. That sense of purpose that I thought was all I was.

By no longer fighting for him, I started to fight for myself, and to fight in the only way I knew how—fight like a girl. That same girl he taught me to hate.

That girl who has the courage to be present, to be broken, to be wrong, to be afraid.

That girl who too many times stood in silence taking in the pain of others.

That girl who was lost in doubt and sadness.

That girl who recognized that it was time to say: enough. For herself and for the other girls she knew.

I am a woman and proud to be one. Emotional and irrational, I choose to fight for myself. And by doing so, to fight for all women who are put into place by others, silenced by men who can’t love anybody other than themselves.

I am a woman who is not afraid to admit that I made mistakes. A woman who will never allow anybody else to tell her what to think and how to behave.

I am a fighter. I fight like a girl.

Silence was my abuser’s biggest weapon, the one that he used to paint an idea of us that everybody perceived as ideal. Ideal for him to keep doing what he was doing. To crush me.

And I was terrified to talk. To admit that over and over again I was choosing to be a prisoner. Terrified to disappoint everybody around me, ashamed, and, more than anything, scared to accept the truth.

The truth is, telling my story is what saved me.

Make the world uncomfortable with your honesty. It does not matter what the consequences will be. Stop preserving the beauty of an ideal picture-perfect life and instead expose the truth.

A post shared by Eleonora Rachele Zampatti (@eleonorazampatti) on Feb 6, 2019 at 6:32am PST 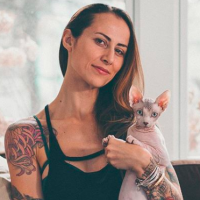 Image: Author's own by @everydaylivin

I am not Your Victim. ~ Eleonora Zampatti Identifying Emotional Abuse before it Happens. How Abusive Relationships Capture Us—& Refuse to Let Go.
See relevant Elephant Video