The Lies we need to Stop Believing if we want to Heal our Relationship to our Body.

A friend recently told me that when she was in high school, she went through a growth spurt and suddenly lost a lot of weight.

Up until that point she had been, in her words, a “bit of a butterball” until she shot up four inches and dropped a few sizes.

My friend had spent most of her life up to that point wishing she could be as thin, airy, pretty, and cool as the popular kids. She had felt invisible, and assumed there must be something wrong with her that made her so unimpressive and unwanted.

Then she lost 30 pounds and, suddenly, she became visible. The cool kids wanted to hang out with her, she got attention from boys, she was invited to parties, and she basically just got everything she had been dreaming of.

But instead of feeling amazing, my friend just felt angry.

Nothing about her had changed other than her weight, but suddenly everyone thought she was funny, and cool, and interesting. My friend described this transition as jarring and confusing, as if an invisibility cloak she hadn’t known she’d been wearing her whole life was suddenly yanked off. Now that she was thin and pretty, she was treated with kindness and respect.

This pissed her off.

To hear her tell it, up until this point, my friend had assumed that there was something wrong with her—her personality or core—that made people not like her. All the positive attention she got after losing weight made her realize those people only liked her because she was valuable to them once she became “hot.”

This solidified several beliefs in her mind that she would then spend the next 15 years healing from:

Nobody will ever see you for who you are; the best you can hope for is to offer them something valuable in exchange for their attention.

People are only interested in your outsides, and don’t give a sh*t about your insides, so it’s really, really important to look perfect.

Just to recap, my sweet and hilarious friend was treated like she didn’t matter and held no value, because she was a plain and slightly chubby girl, so she assumed there was something deeply wrong with her that repelled people. But then when she went through a physical transformation and was suddenly treated like she had value, she felt even more isolated and invisible, because it felt like nobody would ever care about who she was inside.

This isn’t how we imagine it would feel to finally be “accepted.” This isn’t the joyful, easy, and confident life that we’re promised if we lose weight or finally look “good enough.”

By every marketing and social media account, my friend should have been basking in the glorious satisfaction of being pretty and popular; reveling in her new status as one of society’s “chosen ones.”

This is the promise made to us over and over by the weight loss industry, the beauty industry, the cosmetic surgery industry, and many more: that by looking a certain way, you will be admitted into the ranks of those People Who Belong.

You know what PWB look like? They’re thin, beautiful, young, white, and middle or upper class. We’re all fed the story that the closer we can get to looking like one of these people, the closer we will get to being one of them.

Being one is important, because People Who Belong are supposed to be happy! Their life is supposed to be easy and fulfilling. They get their choice of partner, jobs, and opportunities. They are celebrated and praised, they have amazing sex, they are confident in themselves, and they feel wholly appreciated and loved!

This is a lie.

In fact, looking like a Person Who Belongs often doesn’t actually make you feel like you belong, and being valued and celebrated for how you look really doesn’t feel as good as we think it will.

This is a crucial fact to wrap your head around when it comes to healing your relationship to your body.

Where does this fantasy even come from? Why do we think that being thin and beautiful will suddenly make us happy and confident?

A big part of the answer is capitalism. Advertisers spend an enormous amount of time and money fueling the fantasy of the blissful lives of People Who Belong. It’s their job to convince us that with just a few purchases, we too can experience the easy, happy confidence of people who have it all. And for women, “having it all” is about looking a certain way.

In my experience though, focusing on how you look actually makes you feel less happy and confident, and more likely to become obsessively critical of all your perceived “flaws,” no matter how small.

Instead of basking in the success and celebration of your new appearance, as marketing promises, most people who lose weight just start nitpicking their bodies and trying to push themselves further. (This is one reason so many casual dieters end up developing eating disorders.)

In fact, in my decade of experience working in the fitness industry, I never once heard someone hit their goal weight and say, “This is exactly how I was hoping to feel!”

Never once has someone achieved a sustainable aesthetic goal and said, “Perfect, I’m done, this is good enough.”

Instead, they say things like, “Maybe I should lose just five more pounds.” Or, “Now I just want to tone up this one area.” Or, “Actually, can we fix this other thing?”

That’s one reason I moved away from the fitness industry. Not only is looking like a Person Who Belongs in our culture impossible and unhealthy for most women, but even if you achieve it, it will not make you feel how you want to feel.

You actually can feel the way you want to feel, in any body, at any size or shape, whether you are close to the beauty ideal or not.

Don’t spend your life waiting for access to a club that doesn’t exist.

You deserve so much better than that. 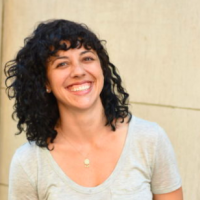 To the Beautiful Woman who is Striving to be Skinny. For the Women who know Beauty Standards are Bullsh*t, but Still Can’t love Themselves.
See relevant Elephant Video