I Spent a week in Paris with a Stranger & it was Pure Magic.

I’m a sucker for a good story.

I’ve been known to make spontaneous decisions, take spur of the moment road trips, and buy plane tickets on a whim. I believe in living life to its fullest and I’ve gone on more than 100 first dates. And, I have gratitude for each and every one of them: Good, bad, ugly—each was an adventure, a connection, and a story to tell.

It’s safe to say that there is not much that shocks my loved ones these days, not even when I announced that I had landed in Paris with a man that lived 2,000 miles away from me, one who I had only met once prior to our transatlantic flight. I’m fairly certain that our time together will go down in the history of my life as the most epic second date ever; a whirlwind romance that took us half way around the world to spend Valentine’s Day in the most romantic city in the world. It also healed my broken heart and inspired me to finally pursue my writing career.

It’s hard to know where this story actually starts, as it’s really the culmination of many beginnings and endings and circumstances and happenstances all coming together in one beautiful crescendo.

So, we’ll start with Paris; a bucket-list trip that was meant to celebrate my 33rd birthday and double as an attempt to save my boyfriend from a depression that I feared would take his life. I planned the entire trip down to the hour, packed full of sightseeing and excursions, romance and adventure.

Whisking him away was my last ditch effort to help him fight the demons he was facing and I would have done anything, paid anything, traveled to the ends of the earth to do so.

We never made it to Paris, though. Our relationship crumbled with his illness and I knew that I had to step away. To say that I was devastated would be an understatement, but I vowed to take the trip solo and make the absolute most of it, for both of us.

In the weeks and months that followed our parting, I nurtured my broken heart by diving into the world of personal growth and soon discovered bestselling author and spiritual guru, Gabby Bernstein. I was half way through her book Spirit Junkie when a light bulb switched on in my brain and my life was instantly and forever changed.

I knew that I needed to learn more from her so I Googled her name and found out that she was currently on a book tour. Unfortunately, the tour was nearing its end and wouldn’t be coming anywhere near my hometown of Orlando, Florida. I was also completely out of vacation days at work, thanks to my upcoming trip to Paris. The only date that might work was on a Sunday in Los Angeles, all the way across the country. I felt defeated, but I decided to monitor the flights anyway. To my surprise, I was alerted the next morning that I could book a round-trip flight for only $125! I would leave Friday after work and return on a red-eye flight Sunday night, arriving just in time for my 8 a.m. shift at work on Monday. No vacation days needed. It was meant to be. I booked the flight.

A few days before my flight to Los Angeles, I was sitting in a local bar with my sister. As we sat, drinking fancy brews, chatting and man bashing, I mindlessly scrolled through my Instagram feed. “Hey! This guy lives in California. I should meet him.” The guy was a yoga teacher who I had randomly followed years ago and never actually spoken to.

Being a good sister, she encouraged this idea. Together, we composed my first ever DM and I hit “send.” Days went by with no reply until the evening before my flight when I decided to take another approach. I made a public post, tagging the yoga teacher and declaring that my trip wouldn’t be complete without a date with him. He finally responded and, while he was hesitant, he agreed to meet me on Saturday. Pleased with his response, I rearranged my plans and penciled his name in to my calendar.

It was a date.

We met at his morning yoga class—it was lust at first-hand-on-adjustment. The chemistry between us was undeniable. We decided to continue our date with lunch and drinks at his favorite spot. We both laughed as we told the bartenders how we met. We took too many selfies, we cracked ourselves up, we talked all afternoon, and we were totally smitten with each other. Lunch turned into dinner and neither of us wanted the night to end, but alas, the time had come.

We agreed to meet one more time in the morning for another yoga class and a quick breakfast before I made the two hour drive back to LA to see Gabby. We did yoga, had breakfast burritos, and ended our time together with an incredible view overlooking a lake, sipping coffee, and talking what-ifs. I said goodbye to him that day not knowing if I would ever see him again, but I couldn’t shake the feeling that our story wasn’t over.

I flew back to Florida that night and woke the next morning to a message from him that read “How long will you be in my dreams?” My heart skipped a beat.

“Come to Paris with me.” I replied. And the rest, as they say is history.

Less than two weeks later, we were touching down in Paris. It was snowing and we were both in awe. A Florida girl and a California boy on their second date in Paris in the snow.

The city was even more beautiful than I had imagined and with the light dusting of snow, it was pure magic. We fumbled through our first day, trying and failing horrible to navigate the tiny Parisian streets by foot, pulling our luggage through the snow and getting to know each other in a situation that was completely out of our comfort zones.

To make things even more laughable, he had agreed to do all of the things that I had already planned for this trip—and on day two, we would be waking up at dawn for a couple’s photo shoot at the Eiffel Tower. It got a little awkward when the photographer, wanting us to have a dance, asked what our song was. We smirked, shrugged our shoulders, and I eventually blurted out that we had only known each other for three days. We settled on a snowball fight in the courtyard of the Louvre instead.

Over the next few days, we walked every inch of the city. We circled Notre Dame as I photographed it from every angle, stopping at least 20 times to yell, “It’s amazing!”

We ate snails and mussels and more baguette sandwiches than I could count. We hiked to the top of Montmarte and drank hot mulled cider. We got lost and we argued. We went to Disneyland Paris in matching sweatshirts. We almost got pickpocketed (probably more times than we know). We splurged on fancy meals and wine. We toured the city in an old, classic car. We shopped the famous Parisian sales. We made new friends and even met a woman who lived in Mexico and had taken his yoga class while on vacation in San Diego (Mind. Blown.). We missed our train. We missed our Uber. We survived.

And on our last night in Paris, which just happened to be Valentine’s Day, we drank champagne at a rooftop bar with the Eiffel Towel sparkling in the distance. While it wasn’t the trip I originally had in mind, the week I spent in Paris with the stranger who I met on Instagram was perfect.

We saw each other a few more times as I racked up frequent flyer miles making trip after trip to California, but the distance proved to be too much. We inevitably ended our relationship when it became clear that neither of us were willing or able to relocate.

I hated to let him go, but I left California that last time feeling more inspired than I had ever been. I was given the gift of a whirlwind romance and a trip of a lifetime, and I was bursting with gratitude over the entire experience.

Our story was one that needed to be told and it was the catalyst that launched my writing career, it also led to many beautiful friendships that I still cherish to this day, and I can’t help but smile when I think about him, our time together, our story.

It is by far one of my most favorite stories to tell and one that I will treasure forever.

Perhaps this is the end of our love story or perhaps it is just the beginning. Plot twists, after all, tend to be my thing. 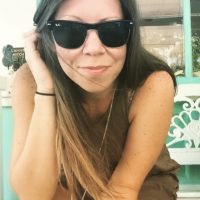 Image: Author's own by Catherine O’Hara