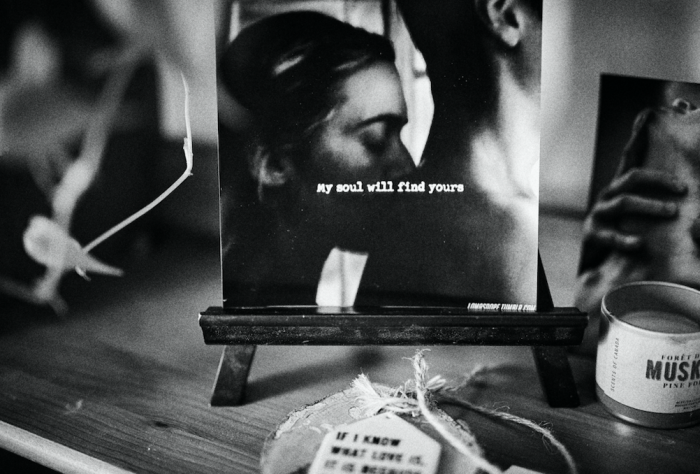 I just completely flipped for a woman. Completely. Flipped.

I mean, not “Jeez, I can’t stop thinking about her” flipped. It’s more of the “I just wrote her a song and ran to the studio, recorded it, got it mixed and mastered, and sent it to her” flipped.

This, to me, is the real thing: hours on the phone together at night without ever once running out of things to talk about; difficulty concentrating on virtually anything else; quickening pulse when her text appears on my screen and then pulling over just to read what it says (which is kind of a big deal when you’re driving a tractor trailer).

This joyful and unbelievable period of my life is somewhat of an anomaly. Yes, I have been in and out of quite a few liaisons since the split with my children’s mom two years ago, but nothing was ever like this. These feelings lately are the kind we wonder if we’ll ever feel again after a breakup.

I began to wonder if I was doomed to just settle with what was “out there” in the dating world. Friends and family did mention that the right person would come along, but after so many lackluster dates, I dismissed their words as polite banter people feel obligated to say when they feel sorry for you.

Yet, here we are. They were right.

Even though the realization that we may have found the “right” person is largely intuitive, there are a few ways to determine if we are truly on the right path:

Immediate Recognition.
This is, of course, related to the intuitive feeling of knowing in your heart when something is right, except it goes quite a bit deeper. For myself, when I am able to be present with another person, when I am able to listen to everything they’re saying without the chatter in my head, the committee that is busy preparing a response, I recognize that I am with the right person.

It is a wonderfully emancipating feeling and is always a prelude to what some describe as “walking on air” after you spend time with someone.

Your Differences Complement Each Other.
No one wants to date themselves; or rather, no one should want to date themselves. One of the greatest aspects of falling for another person is reveling in how different they are and, yet, how easy it is to relate to one another. It is paradoxical, in some respects, because that is how the natural world was designed—with paradox and mystery. This translates much of the time to the gut feeling we have when we know we are in the right place with the right person.

You Feel Comfortable Getting Uncomfortable.
Let’s face it, it is never fun to have to open yourself up to another and tell them when you feel rejected, insecure, jealous, or hurt. When we face these less than desirable emotions and feel better in our hearts after allowing ourselves this vulnerability, it is a good indicator of how well matched we are.

Conversely, if we find ourselves in a situation where we wish we hadn’t let our guard down, we are probably not heading in the right direction pursuing something with that person.

They Challenge You.
I have been in enough less-than-optimal dating situations to know that when the prospective partner is wholly accepting of everything we say and do, it’s not going to last for that long.

Most emotionally healthy human beings get excited about the prospect of being challenged by an engaging and inquisitive partner. This may initially seem a bit perplexing because generally it is not something people will write on their Match.com profiles, but I have found it to be an integral part of what makes a relationship exciting.

They Enhance Your Honesty.
During my tenure in the dating world over the past couple of years, I have experienced many situations where I hang up the phone with a person and feel awful about what just transpired. It didn’t really matter if the dishonesty was coming from the things I was saying to the other person or what they were saying to me, it was just never a good sign and most likely led to every one of those situations fizzling out.

There is nothing inherently malicious about this sort of dishonesty, because it generally sprung from my aversion to being alone, but it almost always led to nowhere—or worse than nowhere. With the right person, even though honesty can sometimes be scary territory, I always feel compelled to stay in that place anyway.

To reiterate, when we have experienced enough in our lifetimes, we can rely on our gut feelings to let us know when we’ve struck gold in the dating world; however, it is never a bad idea to match our experience with these indicators.

I know, for myself, when all five of these points are being reinforced with every one of my interactions with the object of my desire, it is an expansive and joyful reminder that I just may have finally found the right person.

How I Know you are “The One.” This is what a Relationship with “The One” should Look Like.
See relevant Elephant Video