How Attempting to Take my Life Saved my Life.

In 2004, late in my teens, I did the unthinkable: I attempted to take my own life.

After fighting self-hatred, and destructive beliefs about the world and everyone in it, I was done.

I’d been numbing my pain with drugs and alcohol long enough, and was tired of not belonging, of feeling alone.

For what seemed like a lifetime, I’d been choosing to run away from what I perceived to be conformity. I was running from adulthood, and from what everyone thought I should be doing. I was navigating that gap between high school and the next chapter of my life, but I was doing so alone.

I felt helpless, lost, and pissed off.

With no guidance or emotional support, I was a plane nose-diving toward certain doom. I surrounded myself with people 10-15 years my senior, people wrapped up in the same sh*t I was doing. These were my role models because they felt safe and familiar.

Even with each of us breaking various laws—some way worse than others—I felt safer with them.

And because I didn’t know any different, I continued choosing a life that I knew, deep down, was killing me. A life that was leading me straight toward prison or death.

My attempt to rebel, my attempt to numb, were the results of a boy who did not understand himself. A boy lost in his emotions and his mind.

It was always my dad’s/mom’s/teacher’s fault that I was so pissed off all the time. Or at least that’s what I told myself.

The drugs, sex, and crowd I ran with offered a feeling of escape. A sense of detachment. A sense of something other than experiencing the pure terror of my own mind. A mind that was constantly riddled with thoughts and beliefs about hating who I was and was not.

Most of the first half of my life was spent fighting the world, and everyone in it. But mostly, I was fighting myself. And that internal struggle showed up in many ways: fights, run-ins with police, and a complete disregard for the feelings of others, to name a few.

Influenced by my self-induced hatred and the substances I had consumed, I decided I was done. I couldn’t take it anymore. At this point, life scared me more than death.

That night, with tears running down my face, I put a gun to my head and pulled the trigger. The last thought I remember: “I’m sorry.”

The trigger pulled.
I heard the sound.
And, all went dark.

I remember hitting the ground as if I was a rag doll being dropped to the floor.

I don’t know how long I was lying there, but at some point I came to and saw someone calling 911.

To this day, there are moments that are still blurry. Be it from the drugs or my mind protecting itself, I don’t know. What I do remember is my entire system went into survival mode.

“I am not going to die today,” my mind was saying.

I was mid panic attack—my chest was pounding, I was shouting at the top of my lungs, and vomiting over and over. When the paramedics arrived, I fought with them, refusing to be strapped down. I was convinced it was not for my own good, convinced that would not save me.

I learned later that my brain was hemorrhaging and my panic attack was making it worse. I spent the next two weeks in an induced coma to allow time for the swelling in my brain to subside.

Waking up from my coma brought a new series of fears. Before, I feared existing. Now, upon waking from my coma, still groggy from the morphine, and my head half-shaved from surgery, I was told I may never walk again. I may be challenged to learn, to remember.

Life may never be the same.

The overwhelming sense of fear, despair, and powerlessness set in. A stream of tears poured down my face at the realization that I had chosen this. I had chosen to isolate myself. I had chosen to shoot myself because I believed there was no other option.

But whether you believe in miracles, science, or whatever, I had a second chance at my life.

A chance to overcome the potential limitations of my body.
A chance to break free from the environment I had put myself in.
A chance to stop blaming everyone for everything that offended or hurt me.
A chance to start taking responsibility for my mistakes, my choices, and my life.

This attempt on my life gave me a new appreciation for it. But even with all this, I’ve still had many inner conversations and bumps in my life along the way since then.

Many people are shocked when I say that I wouldn’t take back shooting myself, even if I could. My response is always the same:

“Attempting to kill myself saved my life.”

What I learned from this was the power of choice and taking responsibility. All events leading up to, and including, me shooting myself were choices.

At every turn, I had chosen not to take responsibility for what I could control: my actions and my responses to life. No one made me smoke and snort meth. No one made me hang out with drug dealers and fugitives of the state. Those were my choices.

As I was recovering from my surgery, a switch flipped in my mind.

The ideas of “choice” and “responsibility” became active principles in my life. I chose to put everything I had inside of me into walking again—even though there was no guarantee I would.

When I made that choice, I took responsibility for making it happen. Pushing myself each day, asking for help, and being willing to fail were all a part of this.

I’m happy to report that not only am I able to walk now, I’m an active runner and backpacker. But choosing to take responsibility for my desire to walk was only the first step.

Since then, choice and responsibility have been present in both big and small moments:

There are many more examples, plus many where I could have made better choices or taken more responsibility for my actions and responses.

When the world and life presents me with situations I don’t want, I’m able to recognize what I can do, what I’m always in control of—how I choose to behave, respond, or react to what’s going on around me.

Choose today to take responsibility for your life.

And maybe together we can answer this question: How do we help others become more aware of the choices they do have, without the need for tragedy to awaken this within them? 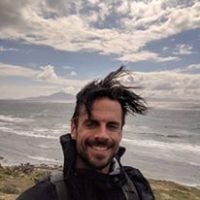 Matt Hogan is a coach that gets hired by people that are ACTIVELY making an impact in the world through the causes and people they serve. He is hired to help them transform th… Read full bio

Suicide doesn’t Discriminate: 6 Warning Signs that could Save someone you Love. My 16-year-old Son Completed Suicide.
See relevant Elephant Video