7 Words from my Grandmother that Reminded me What Love Is. 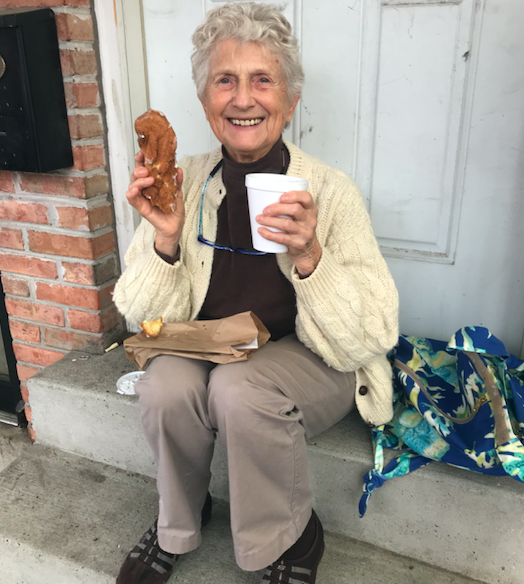 I come from a family of gregarious narcissists fond of conversations made up entirely of interjections.

Our dialogues often devolve into a basket of snakes; each monologue trying to bite and flex its way to the top of the pile—each new thought masquerading as a finalizing point. And it never ends.

We have solved all of the world’s problems; recreated them and then solved them again. My grandmother is often quiet throughout these verbal games of King of the Hill, so you have to get her alone if you want to engage her.

The day before my cousin’s wedding I found her walking in the parking lot outside the hotel. It was spring. She looked lost. I went out and asked her if everything was okay, she didn’t look at me but said, “There are so many problems in the world. When you’re young, you want to fix all of them. Then you get married and have babies and don’t have time for the world’s problems anymore. So, you prepare your kids, and hope they’ll solve them—but then they get married and have babies of their own and now those babies are getting married and the world’s problems only keep getting worse. And it is a very big world.”

I told her I didn’t plan on having kids. She smiled and asked if we could sit in the shade for a bit, and so we did.

I thought about this a lot. The next time I saw my grandmother, I was fresh off of a Facebook-feed binge, feeding the cynical wolf. I sat down to dinner and told her my theory for solving all problems on Earth:

We need aliens to come down—omniscient aliens who can see everything we do and say—and when someone is about to do something dick-ish, ZAP, they just zap them from existence.

For example, if some racist is about to say or do something hurtful—zap. If someone is about to beat their kids, or rape someone—zap. And you see, these aliens are completely objective. No religion, no belief system, and they don’t care what you look like naked. If you act with the intention of hurting someone, they zap you, done. That is the only way people are going to stop being dicks. It’s called the don’t-be-a-dick-aliens theory of everything.

We were having spaghetti. The summer-ware was out. The napkins had ducks on them. My grandmother took a napkin and tore it in half. She placed one half on her lap, the other she put back—the half with the head.

She said, “How totalitarian of you.”

Her hair was white, and her disapproving look was dark with wrinkles. She said, “You should love more. The only way anything is ever going to get fixed in the world is if people learn to love more.”

And I argued, “What about families who love their children but are so religious that they hurt them for being gay, or they want to save them so they do cruel things to try and make them into someone who will be saved? That is love and still, it hurts people.”

My grandmother had been through a lot in life. She’d suffered abuse as a child and struggled with mental illness and poverty through much of her early years—concepts alien to me. Through all that, she’d held onto a belief in humanity while I’d been bested by a few Facebook posts. I wanted to apologize, but I didn’t.

She helped clean up; washed dishes, wiped down the counter. She put her coat on and before she left, she kissed me on the back of the head and said, “Watch out for the aliens, would you?”

The Advice on Love from my Grandmother that Changed My Life. 20 Words that Sum up my 88-year-old Father’s Wisdom.
See relevant Elephant Video