How to use Mala Beads as our Spiritual Armor. 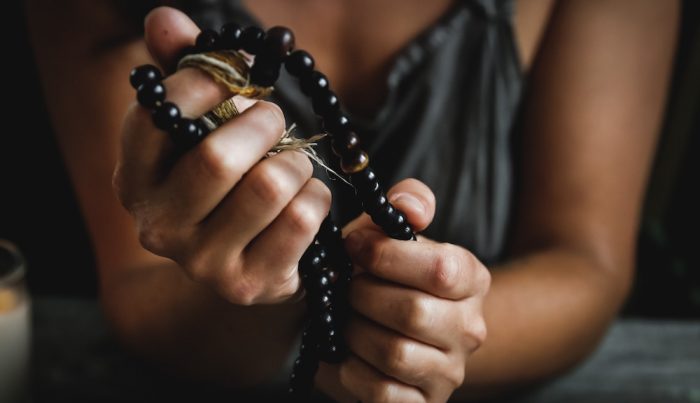 What is a mala?

As a jewelry designer who makes mala beads, I get asked this question a lot. And the answer is surprisingly involved.

In a nutshell, a mala is a set (or string) of beads that is traditionally used for prayer or meditation. But I believe it offers so much more that. I like to refer to malas as spiritual armor, because they help protect, heal, and guide us on our journey through life.

To understand what a mala is—and all that it can bring to our lives—it helps to know the history and significance of malas, the different types of malas, how to use them, as well as tips for choosing a mala that is right for you.

A Brief History of Mala Beads

It is believed that malas—which are sometimes also referred to as prayer beads or worry beads—originated in India thousands of years ago, with roots in Buddhism, Hinduism, and yoga traditions. In fact, other spiritual practices (such as Christianity and Islam) also use beads for prayer. For example, many Catholics use rosary beads. The word “bead” itself is derived from the Old English noun “bede,” which means a prayer.

Mala beads were originally made of rudraksha seeds from the sacred bodhi tree. But over the years, they have been made with other materials, such as wood, stones, and crystals.

Many people wonder if malas are a religious symbol, and the answer is “it depends.” If someone chooses to use a mala as a religious symbol, great! But mala beads can also be used as a pure devotion to a practitioner’s yoga, meditation, or other mindfulness-based practice.

Throughout history, malas were used for prayer and meditation—primarily to help people keep count while reciting, chanting, or mentally repeating a mantra (a word or phrase used by someone who is praying or meditating).

The goal of using mala beads was to help practitioners focus, with the ultimate goal being to achieve a mentally clear and calm state of mind.

What are the Different Types of Malas?

There are many different types or variations of mala beads and different ways in which they can be used.

For starters, a mala can come in many different materials, colors, and sizes. They are made with either stones, gemstones, crystals, seeds, or wood, and depending on the materials used, there will be a different energy associated to each mala. That energy is derived from the vibration of the stones used (each stone carries its own energy) or the colors as they relate to the chakras.

For example, amethyst is a stone that promotes peace and healing, which means chances are if you wear an amethyst mala, the vibration of the stone paired with the intention will prompt you to feel peaceful.

Traditionally, there are 108 beads on a mala because in Eastern traditions, 108 is believed to be a sacred and auspicious number. There are many interpretations as to why 108. Whatever the belief, you get to choose what you most connect with. That is the beauty of mindfulness, after all: it is your own.

Most of the time, the 108 beads are worn as a wrist mala or as a necklace. However, sometimes people wear malas that are divisions of 108, such as 54 or 27. There is often a guru bead, which is larger than the other beads and represents the teacher. This bead is used as the starting point if you’re using your mala to repeat a mantra. Oftentimes you will also find a tassel hanging from a guru bead. This represents oneness—our connection to ourselves and others. A tassel can also represent consciousness.

No matter what style of a mala you choose, you are sure to welcome in more mindfulness, presence, and healing on your journey.

How to Use a Mala?

If you’re looking to use your mala as a meditation tool, there are several techniques that can be practiced. One way is to count your breaths by focusing on aligning each bead with an inhalation and exhalation. Another way is to recite mantras, aligning the recitation of your mantra with each bead.

You can also speak intentions and gratitudes, either silently or aloud, as you move your fingers along your mala. This helps with manifesting your goals and dreams and invites more blessings into your life.

A grateful heart is a magnet for miracles, so naming your intentions and what you’re grateful for in repetition along a mala can be a good way to welcome in more magic.

One way I teach guided meditation with malas is to have a group imagine a color of choice, and then I ask them to inhale the color on each in breath and exhale the color on each out breath. This visualization paired with the touch of the mala ignites the energy centers, or chakras, in the body that may need it most.

In addition to using a mala as a meditation tool, I believe wearing a mala can act as spiritual armor.

Have you ever felt nervous, anxious, worried, or just completely stressed out? In a state of unease, some people choose to soothe themselves with something—whether that be exercise, food, television, alcohol, drugs, sex, or whatever blocks or numbs the stress. However, if you wear a mala, you can instantaneously comfort yourself at the moment you feel the stress coming on.

This happened to me recently on a flight to New York City where there was bad turbulence. I felt my skin moisten, my heart race, and I felt out of control. When that happened, I reached down, rubbed my mala, and instantly I was snapped into the present moment by focusing on something other than where my mind was wandering.

Researchers believe that the average human has more than 70,000 thoughts a day, and most of those thoughts are repetitive. By focusing our attention on a mala, we can slip into the present moment, which promotes a sense of peace and calm.

Tips for Choosing a Mala

Here are my top tips for choosing a mala that’s right for you:

Trust your intuition. Trust that what you chose is what you need. Often, our intuition guides us long before we even lay our eyes on a set of beads, so it wouldn’t be a coincidence that what you are being guided to is what you need most. For example, if you want or need more love in your life, you may be drawn to rose quartz. If you are seeking more prosperity and abundance, you may be attracted to jade. If you are feeling you need help communicating, you may be lured toward sodalite. Then, let the alchemy between the human and the mala work!

Touch, feel, and embrace. Get to know your mala beads by touching them, feeling them, and embracing them. Put them in your hands, hold them, and try them on. The materials in the malas—whether stones, seeds, or wood—emit vibrations and frequencies from the universe, so you can get to know them intimately by feeling them out, literally.

Ask questions. If you are thinking of buying a mala online or in a store, I encourage you to ask any questions you may have about the stones, colors, vibrations—anything! You may want to know the energy of a certain stone, how a color aligns with the chakras, or how to meditate using a mala. Questions are a beautiful inquiry to help you gain knowledge and awareness.

Imagine yourself wearing the mala beads every day. See yourself living in the moment and manifesting your dreams.

Most of all, remember that while a mala is a set of beads traditionally used in meditation, they are also worn for mindfulness and to provide peace, love, and healing. Mala beads are often made with natural materials, such as stones, wood, or seeds—all of which emit energetic vibrations. As a result, it’s so important to trust where you buy your malas, as some stores use synthetic materials that do not carry vibrations.

Above all, my hope is that you remember that how you choose your malas are a reflection of what you want to invite or attract into your life. So, trust your instincts when following these tips for choosing the right mala beads for you. 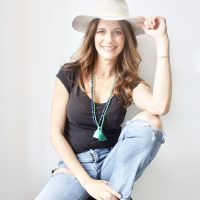 The Power of Mala Beads. ~ Michelle Belair How to Choose a Mala. ~ Lauren Saraswati Zavlunov A Yogi’s Mala-Obsessed Journey around the World. (Part 1 of 2) ~ Diana Charabin
See relevant Elephant Video