Marriage is Crazy but we make Perfect Sense.

*Warning! Some naughty language ahead.

My husband and I have been married for seven years.

Seven years, people. Most wouldn’t have expected us to last this long. I never did. When we got together in March of 2010, I just figured it would be a friends with benefits sort of thing, but then it just. Kept. Going.

Within the year, we both agreed that despite our mismatched resumes, and odd couple aesthetics (which have of course morphed over the last decade), we wanted it to keep going. On our second date, we saw in each other a reflection of the future, one that included Thanksgiving dinners and long road trips and the word you’re not supposed to utter on a second date, but which we both admitted we wanted with shaky voices: children. So we decided to get married, nearly seven years ago.

We even waited two years after that second date. Because though we met in the rooms where sober people meet, we actually took our time with this thing. We got to know one another. We didn’t fall in love, as much as we gently waded into its cold waters, until they finally became warm (probably because my husband peed, but whatevs, metaphor).

As Margaret Atwood once wrote, “Longed for him. Got him. Shit.” Because once I was actually in the confines of a marriage, I looked around and realized how absolutely insane of a proposition I had just signed up for. The outside of the house looked like a suburban ranch. The inside was designed by Dali.

It wasn’t that we were merely crazy for doing it; but that the custom itself was one of man’s most bizarre. We meet someone. Decide we like them enough to eat dinner with them, even breakfast. We think it’s fun to bone them, and then we decide that we are going to do that—for the rest of our lives.

Not only do we have to wake up with them every morning and go to bed with them every night, but we have to manage the burdens of finance and children and getting sick and watching our parents die and the baggage from our fucking childhoods, all the traumas and burdens, and STDs that we brought into the deal from Day One.

And then on top of it, we have to fuck each other. Put a penis in our mouth once in a while. Lick a vagina.

And there’s not even a strong biological argument for the arrangement. It’s not like parenthood where the survival of the species literally depends on it. It’s a choice. One people continue to make all the time. After seven years of marriage, I don’t think Katharine Hepburn was wrong when she said, “Sometimes I wonder if men and women really suit each other. Perhaps they should live next door and just visit now and then.”

Historically speaking, most couples didn’t marry because they were in love, but for economic liaisons. As Stephanie Coontz writes in Marriage: A History: “You established peaceful relationships, trading relationships, mutual obligations with others by marrying them.”

My husband’s family and mine have never traded anything other than veiled barbs and a few holiday dinners. But there is one economic alliance between us: I am the primary breadwinner, and my husband is the primary caretaker.

Sometimes when I consider leaving (because who doesn’t consider this at seven years), I remember that alliance. And then I think of our friendship. Like the cold, hard terms of a banknote, that damn friendship is always there. It is reliable and warm; it has served us both on the hardest days of our marriage. And has been elevated into romance on our best days.

Like a psychological hard-on, Friedrich Nietzsche once wrote, “It is not a lack of love, but a lack of friendship that makes unhappy marriages.”

Most Americans don’t marry for friendship though; they prefer to lean into the misguided concept of love. According to a 2013 Pew Research Center survey, about nine-in-ten Americans (88 percent) cited love as a reason to get married, ahead of making a lifelong commitment (81 percent) and companionship (76 percent). But if you have any sort of confusion over God, imagine basing one of your most important life decisions on something even more ethereal than a spiritual world.

Love is invisible until we make it so.

After seven years, my husband and I have watched love come and go, like the waves he surfs. And yet, our marriage succeeds in spite of us. If it was just about us, we would have blown it up a long time ago. We’re both kind of insane, and I’m known to shove when he makes me mad (look, I know it’s not good okay—leave me alone), but our marriage has become its own thing.

As psychologist Roni Beth Tower writes in Psychology Today, “A key way to make a love relationship last over time is by appreciating the extent to which the couple itself — the ‘we’ — is an entity made up of two separate people who, together, have a collective identity…with its own needs, wants, and foibles.”

And that identity isn’t simply an addition of our two sets of needs, wants, and foibles. It is an amplification of all of those things.

The economics of love are not simply a sum of our parts. Because if we view our marriage as wife plus husband, we end up with mismatched resumes and odd couple aesthetics. But when we multiply ourselves, we are our children, we are the hard banknote of our love, we are the craziest idea on the planet.

And yet we make absolute sense. 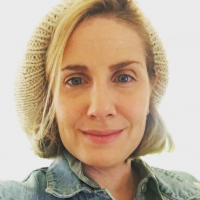 Kristen McGuiness has been sober from all the drugs since 2006. Bestselling writer since 2010. Rebel wife since 2012. Momming the shit out of this biz since 2015. Connect with… Read full bio

5 Words that lead to a Kick-Ass, Happy Relationship. The Truth about Marriage that Nobody Tells Us.
See relevant Elephant Video