The Cosmic Mirror: When a Stranger Reflects our Loss of Innocence.

I met Ruby at Gold, a Tokyo club where gaijin, foreigners, popped hits of acid and E, then disappeared into three floors of mayhem.

She was tanned and toned, her hair bleached from the saltwater and sun from Goa’s beaches, where so many young travelers liked to winter. It had been nearly four months since a beautiful friend of mine overdosed while trekking in the foothills of the Himalayas, so in her memory, I had decided it was time to go easy on the drugs. I still craved the company of madness, so I still partied—I’d maybe have a few drinks, or a few tokes, but would take it easy on the chemicals.

With one bare arm slung around my shoulders, in a moment of what seemed to be ecstasy-fueled kinship, Ruby decided I was her best friend and confidante. Her sweat smelled like a mixture of coconut oil, amber resin, and chemicals. I wondered how far into her trip she was. Though we had just met, she launched into a monologue about her Om and Indian deity tattoos.

“Om is the primal sound of the universe, you know. It’s the sound that belies all other sounds—the mantra of the planet,” she said in a surprising Southern twang.

“This tattoo on my hand is my mirror,” Ruby continued. “It’s the constant reflection of my unity and my oneness with the feminine aspect of the planet.”

Her Om symbol was well-done and I was glad to see it was on her hand and not on her foot. On my peregrinations throughout Southeast Asia, I had learned that sacred symbols such as Om should always be near the head, close to God, never near soiled feet.

“This tattoo of Shiva represents the trinity of Creator, Sustainer, and Destroyer within me. I am a true Goddess. I have absolute power over my world and my destiny.”

This girl really had her sh*t together.

I had spent the winter seated on my ass, hostessing wealthy Japanese businessmen. I was pale and pudgy from all the chocolate covered almonds, mayonnaise dipped stringy squid, whiskey, and champagne I’d indulged in before rolling home at 6 a.m. to sleep all day. I had recently broken my own nocturnal streak—hadn’t seen daylight for 11 days.

I wondered if I’d ever be as self-assured and confident as Ruby.

When her “date” sidled up beside her, a bottle of Suntory in hand, she removed her arm from my shoulder and embraced him. I recognized the lanky Brit with the yellowing, crooked teeth immediately. He was well-known on the rave circuit for his penchant for lighting his lovers’ hair on fire while they slept. Although his fetish was common knowledge, he was still somehow able to draw self-assured girls like Ruby into his hazardous sheets.

When Ruby took a swig of her beer, I took the opportunity to invite her to my 23rd birthday party at Earthhole in Osaka the following weekend.

“How much money could I make if I traveled to Osaka for a few days?” Ruby asked.

“How much money should you take?” I repeated, struggling to hear over the house music.

“No. How much can I make?” She became agitated. “How many tricks can I turn in a weekend? I’m not going if I can’t make some cash.”

Her words winded me. I felt my foundation shift, almost drop. How had I been so wrong about this girl? She’d seemed so intelligent and interesting. If I could be so wrong about her, what else was I mistaken about?

I excused myself and climbed the spiral, metal staircase to the third floor to get some perspective. Below me lurched a sea of sweat-soaked, batik-wearing partiers. The Israeli’s with their curly dark hair and lethal good looks were the easiest to spot amongst the crowd of international revelers. It was the beginning of spring. This crowd had recently returned from the beaches of India, Thailand, and Bali, and were now at the beginning of a 90-day, (the length of a tourist visa) money-making mission.

Under the glaring light of the maraschino scented bathroom, the warm water running over my hands soothed me. I was grateful not to be dependent on meth or ecstasy anymore. Tonight, I was an observer.

I studied my clear eyes in the mirror and caught a glimpse of what looked like red feathers in the adjacent powder room. I found Ruby there, naked except for a red feather boa draped around her neck. She stood sobbing and in the midst of a tragic monologue with her full-length reflection.

When she saw me approach in the mirror, she turned around to face me. Her eyes were swollen, lids smudged with silver and gold eye shadow.

“Have I still got it?” She reached out, touched my arm. “Do you think I still have it?”

“Have what?” I asked cautiously. I was afraid that Ruby was going to ask of me the very thing I asked of myself, but denied before I allowed the question to fully form. Like Ruby, I looked away.

“My innocence,” she cried. “Do I still have my innocence?”

There it was. The very thing I asked of myself. Sure, I had mostly kicked the drugs, I wasn’t screwing my customers, but every night I traded my youth and my morals for the almighty yen. What could I say to Ruby? No. You don’t. You f*ck Japanese salarymen for a living. Your innocence is long gone. Was I any more innocent than she was?

“Do I still have it?” she cried again.

I took her tattooed hands in mine. “Ruby,” I said. “It’s okay. You’re beautiful as you are.”

I envisioned her hair smoldering, the smoke curling itself into a halo before it vanished. “Look at the symbols on your hands. Send your breath into this one.” I pointed at the Thai inspired Shiva on her left hand.

Part of me, most of me, wanted to console her, but an ugly dark part of me almost reveled in her messed-up state. Her f*cked-upness made me feel superior. I hated this emotion and tried to ignore it. I went on talking to her about Shiva and Shakti, and dark and light, and the wheel of Samsara, and some other esoteric stuff I knew. But I did it less as a way to help her, and more like a deflection from looking at my own sh*t.

“But, do I still have my innocence?”

“Yes Ruby,” I said. “You are as innocent as the moment you were born.”

Ruby rested her streaked face on my chest, wrapped her clammy body around mine in embrace. There we were, two strangers in a Tokyo bathroom. One naked and tripping, one dressed and sober—both of us grieving the same thing. 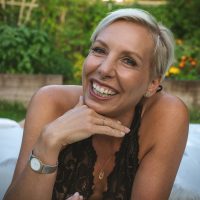 An award-winning writer, Dhana Musil writes essays and creative non-fiction. Her work has been published in The Tahoma Review, the Puritan Literary Journal, and in various ant… Read full bio