The One New Year’s Resolution we Should all make for 2020. 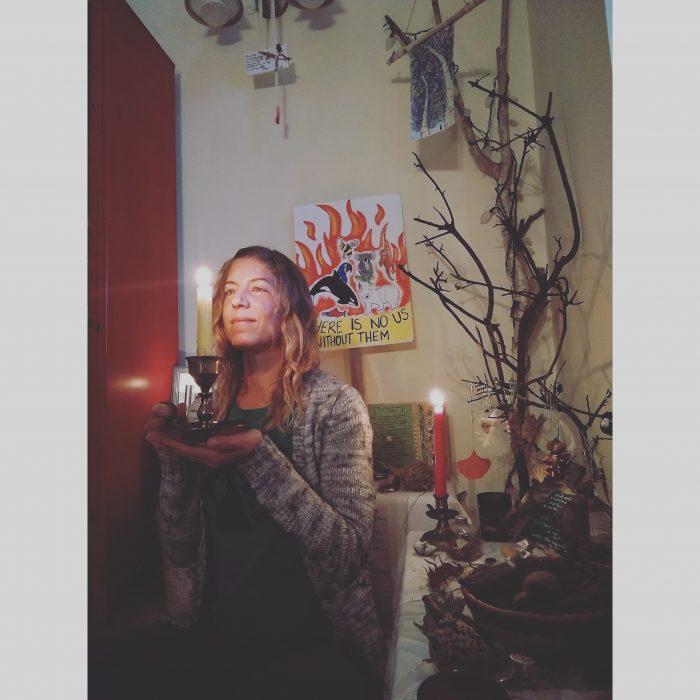 I light the candles on my Yule altar and sit back on my heels, staring ahead.

In the window, a single candle flickers next to a cardboard sign, dancing shadows across painted words.

My eyes blur as the waves begin to roll upward, through my chest, pouring from my face. Wave after wave, and with them, blurry images of children surface. Dirty children, sick children, terrified children, packed so tightly in cages they can scarcely move, in air so thick with stench they can scarcely breathe. Children torn from their families, who may never be reunited.

And I, too, can scarcely breathe in the horrific stench of this truth.

For these children are prisoners in my own country.

I don’t know how many others have played this mental game, but I have. It’s an addendum of sorts to a question I recently confessed here. I imagine times in history where people have been called to courageous sacrifice for others. To speak out against injustice, at a cost. To ally with those who are persecuted. And I wonder what kind of a person would I have been, had I also been alive during that time.

Abolitionists. The Women’s Rights Movement. The Holocaust. Japanese internment. The Civil Rights movement. The Battle for Seattle during the WTO (World Trade Organization) protests (incidentally, not before my time, but before I lived in Seattle).

This is, admittedly, a pointless exercise. Who of us ever knows what we’ll be capable of until it bears down upon us with a choice?

What strikes me lately, though, is this: the question is no longer rhetorical or theoretical. We are, in fact, living in a time where all these realities are still unfolding in our narrative of history.

We have an increasing number of unarmed black people being targeted and murdered by police officers. We have treaties being broken, still today, by both federal and state governments that continue to steal land from Indigenous people and refuse to divest from fossil fuel projects that dishonor these treaties. And we have a battle going on in movements springing up across the nation, across the world, for the health and survival of all life upon this Earth.

We no longer need to wonder.

The time is here, the question begging each of us, Now that you’re alive to these realities, what will you do to show up?

Tuesday night, I joined hundreds of others downtown as we huddled together in the chilly December air with our signs and our songs. On the eve of the House vote on impeachment, we wanted our voices to be heard: Trump has got to go.

I don’t know how many thousands showed up nationwide to rallies, but I couldn’t get images of hundreds of thousands packing the streets in other countries this year—Puerto Rico, Hong Kong, Lebanon—out of my mind. People willing to show up and jam the streets with their bodies, until all business as usual was shut down and their demands were heard. Our rallies were a step in the right direction, but they were not that. Not yet.

But out here with these others, of all generations, I can feel the pulsating hope. We wouldn’t be here if we believed all was lost. Each time I show up to a rally, a protest, a march, I feel the collective energy rising. We are gearing up for bigger battles ahead, and lord, we want to be ready. We want to be the kind of people who endure and overcome, because if there’s one thing we know, we’re all in this together.

As 2020 fast approaches, so does this sense of clarity, which has settled all the way to my bones. This next year is going to be crazy intense. I’m trying to mentally and spiritually prepare for it the way I did for the last six miles of the one marathon I ran. Those final miles were beyond physical; my mind carried me to the finish line, willing my legs to persist when I thought I might collapse.

The collective labor I recently wrote of, in 2020, will lead many of us to active delivery. That’s not to say the thing we wish to “birth” will be finished next year—no. But the labor is ramping up, and so are we.

So, how do we prepare for what is coming? I can’t answer that for anyone. All I know is that I can only prepare for tomorrow by showing up today.

Showing up will look different for each of us. Maybe it’s having open, ongoing conversations with your kids about realities like racism, immigrant injustices, and the climate crisis and processing the emotions that arise together. Taking your kids with you to a rally or march—or showing up to support the ones they’ve organized.

It may be acting as a “citizen journalist,” writing knowledgeably about the topic that ignites your fire in blog posts, freelance articles, newsletters, op-eds, or on social media. Or showing up to city council meetings and offering public comment. Perhaps it’s making phone calls or sending emails to governors, Congress members, or local government officials. Giving a presentation at your place of work or school. Doing your best to stay in the loop with the current events—local, national, and world—that are most pertinent to the causes you’re invested in.

Showing up may happen through the creation of art, volunteering with a nonprofit, getting involved in a local activist group, being an ally at youth-led and Indigenous-led events, making friendships outside your comfort zone, reading books that challenge your thinking, going vegan several days a week or maybe entirely, cooking meals at home, shopping less, and repurposing what you have.

Let it look however it is going to look for you, but whatever you do, please don’t do nothing this year because you can’t do everything.

I sat down to write some intentions for the coming year, but what tumbled out onto paper was something more like a manifesto. I will paint this on canvas and set it on my altar, for my eyes to focus on each day in 2020, especially those when I feel on the verge of collapse. This is what I wrote…

If ever there has been a year to dig in, root down, and hang on—this will be it. The winds are coming, the Earth’s tremors rumbling, the seas rising; but I, also, am blowing, tremoring, rising. This year, I seek my community of people with vigilant hope. Together, we can withstand whatever comes. Together, we can labor with love as our fire and justice our vision. I continue in my employ for the Earth, honing my focus, watering my seeds of intention, open to new opportunities and abundance, stepping beyond my comfort zone and limiting beliefs. This year, I seek my “Yes.”

And when I feel like giving up, as we all do at some points of weariness, I will remember the kind of person I’m committed to being in this history that is still being written.

I hope we can help each other remember—and keep writing together what is courageous of heart.

Why I’m not Giving Gifts this Holiday Season (& What I’m doing Instead). Year-End Giving: the How, Why & to Whom of Holiday Donations.
See relevant Elephant Video