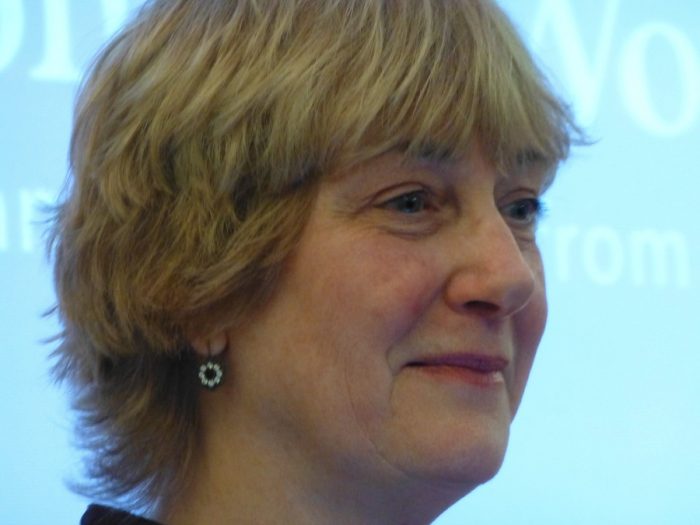 There is chaos of all kinds developing all the time: psychological dis-order, social dis-order, metaphysical dis-order…if we are able to look into the basic situation, then chaos is the inspiration…the basic understanding that confusion is a stepping stone. Confusion means wisdom from that point of view.–Chögyam Trungpa Rinpoche

Trungpa Rinpoche coined the phrase “Chaos is good news” to point to the potential for intelligence in any confusing situation. We could look at all facets of it beyond our self protecting personal bias. It transcends the very divisive black and white world of dualistic thinking. It is taking the mandala perspective: the totality and interconnectedness of everyone and everything in dynamic play. The profundity and ultimate skillful means of the mandala principle is seeing the situation as orderly chaos. The chaos is the juice; the order is our awareness, seeing things as they are. When we stay with the chaos, clarity arises. My interest is in offering this perspective.

There are levels of reality that we can touch into. At one level we are in a world of dualism: there is clearly the appearance of this and that, me and them. We make distinctions. We build a fortress of me, myself, and I that we hold dear, only include those of like mind, and defend ourselves against others. We become totally convinced that this is the way things are: my version rules. Blame takes over, but it is like quicksand. It’s totally unproductive. It goes nowhere.

When we are able to drop the self-centered necessity to protect ourselves, we begin to see that we are part of a dynamic interconnected whole in which we all play a part. Everyone is guilty—in some way contributes to the situation—and no one is to blame. Without blame, a deeper sense of compassion arises. From the mandala perspective we are not the center of the universe; we are part of an energetic dynamic, pulsing between expansion and contraction, rational and emotional, and so forth.  And energy has a synergistic logic which has its own intelligence and process. So there is a certain inevitability and predictability to that process.

There have also been teachings from my family: My father, who was a conscientious objector in World War II, wrote extensively on the pacifist viewpoint. As a young adult he impressed upon me that we must have compassion not just for the oppressed but for the oppressor. My grandfather was a missionary doctor in Turkey during the Armenian genocide. In looking closely at the dynamics between Armenians and Turks, he saw the inevitability of the devastation.

These perspectives have arisen in my mind stream as my own spiritual community has been in turmoil. Shambhala has been facing accusations of sexual misconduct and corruption. I have encountered so many feeling the pain, confusion, and fear of our situation. Emotions run wild and opinions take a stance. And we wonder, how can we possibly think this is good?

There is no doubt that we need to give our feelings some space. I cannot tell you and you cannot tell me how to feel. We feel what we feel. Everything we think, feel, say, and do come from our particular propensities that are unique to us. Even though we might be trying to help, things we say could trigger others. At other times what we say could be a catalyst for opening others to a new way of seeing things. So our task must be to proceed with an unbiased perspective, honoring everyone’s voice.

Now let’s look at some of the particulars that have created the confusion. Shambhala has been largely a patriarchal society. And why wouldn’t this be so? Our spiritual tradition is patriarchal and we live in a patriarchal world. Our world leaders are despots, not just having different views but highly aggressive agendas. Rigid hierarchy, bureaucracy, and rationalization are the cornerstones of a patriarchy. We are surrounded by abuses of power, failure to honor diversity, sexism, and hypocrisy. We live in a power hungry world and daily see that power corrupts and absolute power corrupts absolutely.

Power systems create blind collusion and a pressure to remain silent to maintain the status quo. As well, individuals feel a need to protect their roles. A “yes bubble” is created. So we have seen institutional denial throughout our community. When people are suppressed from speaking up, it becomes a toxic situation. Those who see the emperor is not wearing clothes become ostracized. Power and submission to power creates victims. To further exacerbate that, when one takes the role of a victim, one gives their power away.

Unfortunately, male domination fairly predictably leads to sexual abuse. We see this happening throughout millennia. It is much more pervasive in many cultures and even what we would consider barbaric in others. But I see abuse as a symptom and not the main issue. The dominance of masculine energy is the issue.

Shambhala’s hierarchical system is a reflection of masculine energy. For example, everyone sits facing the teacher, whether on a chair or throne and teachings are given by downloading one’s knowledge and spiritual experience. It has been heartening that in recent years there has been more effort to create teaching situations with more experiential learning: more circles and dyads and more willingness to hear everyone’s voice. In that kind of situation the wisdom arises from a collective consciousness rather than from one person. This is a more feminine approach.

The Five Wisdoms teachings are a powerful way of having direct experience of the two more feminine and the two more masculine energies. (One is neutral.) Through the practice of the five postures devised by Chögyam Trungpa Rinpoche, we experience the tangible qualities and see how we embody both feminine and masculine energy. We can discover the personal integration of the five and come into the full spectrum—an embodied unification—of who we are.

As a psychotherapist, I am also keenly aware of the impact of childhood trauma on how one manifests as an adult. Whether physically or sexually abused or neglected, most of us have experienced some sense of this. The dominance of masculine energy with its criticism, judgment, and repression are responsible for a lot of trauma. For a child, nothing is worse than constantly being judged by parents and teachers. I see this reflected in Shambhala as the constant sense of “shoulds”: the rigidity of forms, the hours one needs to practice, the numbers of mantras one has to do, and the pressure of getting to the next level of the training. While acknowledging that the rigor this creates in our practice is beneficial, there needs to be equal time and space for loving kindness.

Whereas it is not the mandate of a spiritual community to do deep psychological work, I feel that our teachers and administrators need to be more aware of the signs of trauma both in ourselves and in our students. For instance, putting someone with a lot of trauma on a meditation cushion for hours and hours is like putting them on a time bomb. Further, saying it’s fine for them to take a break, leave the shrine room, and be on their own, is also not helpful. They need to be surrounded by caring and warmth: feminine energy. Teachings on compassion are not enough; it has to be demonstrated in  a visceral person-to-person way.

The current leadership in Shambhala, both at the international level and in local centers, has been leaning into the powerful energy of the chaos. Much attention has been given to basic administrative tasks, increased communication, and care for members of the sangha. However, huge questions remain. What does the future hold? How do we brave a new frontier rather than fall back on the status quo? How do we go beyond what we know to where we would like to be? What do we need to learn? Clearly, our deep process must continue. We tread on a groundless ground, not knowing what is going to happen to the world we had so trusted and believed in.

My greatest wish is that we to move from a dominantly masculine hierarchical structure–in both our governance and teaching style–to one that has a healthy balance and deep appreciation for both the feminine and the masculine. As well, we could invite juicy situations as opportunities to break through to new ground. We could see this period in Shambhala as a time to celebrate. Indeed, chaos is good news!

Irini Rockwell is internationally recognized as a Buddhist teacher, author, coach, and trainer. Her books are The Five Wisdom Energies, a Buddhist Way of Understanding Persona… Read full bio